Vice premier of the People's Republic of China (PRC) and secretary-general of the Chinese Communist Party (CCP). Born in Guang'an, Sichuan Province, Page 546  |  Top of ArticleChina, on 22 August 1904, Deng Xiaoping traveled to France in 1920 on a work-study basis, and there he joined the CCP in 1922. In 1927 he returned to China and was assigned to oversee the CCP's political operations. During the Chinese Civil War (1947-1949), Deng, as political commissar of the People's Liberation Army (PLA), fought hard in central China, ensuring the CCP's victory over the Nationalist forces. 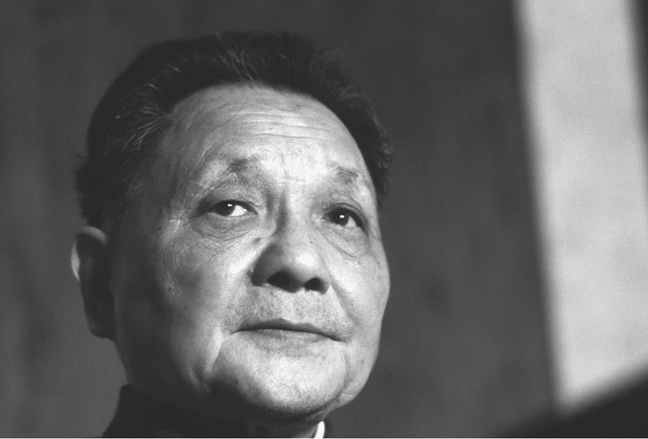 Chinese leader Deng Xiaoping speaks at the Great Hall of the People in Beijing. (Wally McNamee/Corbis)

After the PRC's birth in October 1949, Deng became a member of the Central People's Government Council and the Revolutionary Military Council. He also became vice chairman of the Southwest China Military and Administrative Council, responsible for reorganizing southwestern China. In August 1952 Deng became vice premier and the next year finance minister and chairman of the Financial and Economic Affairs Committee. He was instrumental in preparing the first Five-Year Plan (1953-1958) to reform the Chinese economy.

In May 1954, Deng was identified as secretary-general of the CCP's Central Committee, a post that brought him to the command level of the party's hierarchy. Until the mid-1960s he assumed more posts, including membership in the Politburo. He was also active in foreign affairs, accompanying a number of delegations abroad. His tenure witnessed the emergence of the Sino-Soviet split.

Deng was purged three times during the Cultural Revolution (1966-1976) on charges that he was a bourgeois reactionary. He eventually reassumed the Page 547  |  Top of Articlevice premiership in mid-1977 when Hua Guofeng, the new PRC chairman, called on him to rehabilitate the Chinese economy. Returned to power, Deng inaugurated the Four Modernizations of agriculture, industry, defense, and science and technology. In foreign matters, he was equally innovative. In February 1978, he visited the United States, which resulted in full U.S. diplomatic recognition of the PRC on 1 March 1978. In terms of the PRC's reunification project, Deng developed the one country–two systems model, to be applied to Hong Kong, Macau, and Taiwan.

Beginning in 1981, Deng retreated from the limelight, first resigning the vice premiership, then succeeding Hua as chairman of the Central Military Commission, a post he held until 1990. During his tenure as chairman, he ordered the crackdown against demonstrators in the June 1989 Tiananmen Square incident. Deng died on 19 February 1997 in Beijing.