North African nation. Egypt encompasses 386,660 square miles and it also covers the Sinai Peninsula, which is geographically part of Asia. With an estimated 1945 population of 20.5 million people, Egypt is bounded by the Mediterranean Sea to the north, Libya to the west, Sudan to the south, and the Red Sea, the Gulf of Aqaba, and Israel to the east and northeast. Egyptians call their country the “mother of the world.” The nation's ancient civilization was closely tied to the Nile River, which runs from south to north into the Mediterranean Sea.

Egypt was a tributary province of the Roman Empire. Arab armies conquered the country in the seventh century. Various Muslim nonindigenous dynasties such as the Mamluks then ruled Egypt. From the sixteenth century, the Mamluk and Ottoman ruling classes were political leaders, the military, religious leaders, and merchants, who intermarried and were linguistically and ethnically distinct from the masses.

In 1798 Napoleon invaded Egypt, defeating its Mamluk rulers. Upon the French departure, Muhammad Ali Pasha, a military envoy of the Ottomans, gained control over the country. Through the use of conscription, Pasha developed a more disciplined army, bargaining for his right to serve as Egypt's viceroy in return for suppressing rebellions in other Ottoman territories, the Arabian Peninsula, and Syria. His descendants ruled Egypt, modernized Cairo, and built the Suez Canal, thereby acquiring large debts.

The Suez Canal became of immense importance to Britain, and British troops arrived in 1882 to suppress the Urabi revolt, named for one of its instigators. Britain then assumed control of Egypt's finances and bureaucracy and reformed the army. Britain considered Egypt a key economic and strategic base. British textile industries benefited from a monopoly over Indian and Egyptian sources of raw cotton. The Suez Canal was so important to the British that they maintained troops there for decades. The British ceded independence to Egypt in 1922 but received an indemnity payment, kept control over the Sudan, retained troops and bases in the Suez Canal zone, and periodically exerted their will over the Egyptian king and his government. In the twentieth century, Egyptian nationalism took up the theme of resistance to lengthy foreign domination, which prevailed until 1952.

In World War II, Egypt was technically neutral. But when Italian forces invaded Egypt in 1940, British, Australian, and other Allied forces responded to this and successive Axis campaigns. German General Erwin Rommel drove east all the way to al-Alamein but was forced to retreat west following the British offensive there in November 1942. The expanded presence of Western troops in Egypt and their behavior angered the Muslim Brotherhood, an antisecularist party that struggled with the government.

Requirements that Egyptian officers own property were changed, permitting men such as Gamal Abdel Nasser, the son of a postal clerk, to rise to officer status. Nasser fought along with Egyptian forces in Palestine in 1948. Greatly dissatisfied with the Egyptian monarchy and the defeat of Arab forces in Palestine, he and other officers planned a coup, which they carried out in 1952 in the wake of disturbances in the Suez Canal zone and in Cairo. These so-called Free Officers set up a Revolutionary Command Council and exiled King Farouk. In 1954 Nasser became president in place of a more senior officer, Muhammad Naguib. The military in Egypt has served as the primary source of political leadership ever since; Nasser once explained that the military was the vanguard of a political and social revolution.

The Suez Canal became of immense importance to Britain, and British troops arrived in 1882 to suppress the Urabi revolt, named for one of its instigators.

Nasser preached a populist, anti-imperialist, pro-Arab philosophy that became known as Arab Nationalism and that was expressed in the policies of Arab socialism. However, he suppressed Egyptian Marxists, the labor movement, and the Muslim Brotherhood. In 1955, he signed an agreement with Page 616  |  Top of ArticleCzechoslovakia to purchase $250 million worth of Soviet arms. His 1955 refusal to sign the pro-Western Baghdad Pact and his association with the Non-Aligned Movement ran counter to British aims and to concerned Americans who feared communist influence in the region.

Given Nasser's turn to the Soviet bloc, the United States went back on its pledge to assist in funding for the ambitious plan to build a high dam on the upper Nile at Aswan. Nasser, as with other neutral developing-world leaders, sought to play the Western and communist blocs against each other. When Nasser realized that U.S. aid was not forthcoming, he announced the nationalization of the Suez Canal. The revenues from this would benefit Egypt, enabling development schemes such as the Aswan Dam. This nationalization angered the British, who with France and Israel helped precipitate the 1956 Suez Crisis. The French were upset over Egypt's proclaimed support for rebels in Algeria, while the Israeli government was angry over Nasser's efforts to unify the Arab states, his decision to blockade the Gulf of Aqaba (Israel's entry into the Indian Ocean), and Egyptian sponsorship of fedayeen (Arab commando) raids. Israeli forces then invaded the Sinai. When Egypt refused to allow the British to intervene to protect the Suez Canal, Britain bombed the Egyptian airfields and, together with France, landed troops at Port Said.

The Soviet Union openly supported Egypt, and the administration of President Dwight D. Eisenhower demanded that the British withdraw. Under heavy U.S. economic pressure, Britain, France, and Israel did so. Far from overthrowing Nasser as they had hoped, the three had made him a hero in the Arab world. Nasser now expelled many foreigners and minorities and seized their property.

Nasser's government turned increasingly to the East for military aid, weapons, and technical expertise. Some 17,000 Soviet advisors eventually arrived in Egypt, and Egyptians received advanced military training in the Soviet Union. In 1958, Syrian officers and politicians prevailed on Nasser to join their country in the United Arab Republic, a three-year experiment in Arab unity. Syria withdrew from the union in 1961. That same year, the Egyptian government pursued more aggressive Arab socialist policies in the form of land reform, government seizure of private holdings, and further nationalizations. After 1962, the Arab Socialist Union, a single political party, dominated Egypt's bureaucratic and governmental structures. It became even more important, for a time, after 1965. 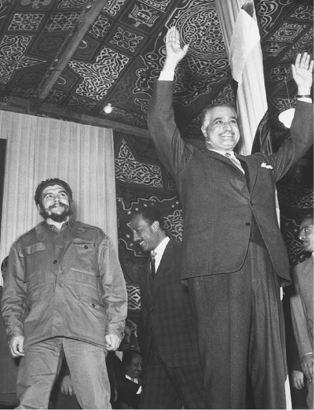 The Egyptian military expanded throughout the Cold War and grew to 320,000 men by 1989. Equipped primarily by the Soviets, Egypt began to replace that weaponry as it turned Westward in the 1970s and 1980s. Egypt's primary military challenge was Israel's better funded and far better trained armed forces. During the Cold War, a struggle between more progressive Arab Page 617  |  Top of Articlestates such as Egypt and Western-aligned monarchies such as Saudi Arabia took place; some scholars termed this the “Arab Cold War.” The Arab Cold War led Nasser to pursue secondary aims against dominating Saudi proxies such as the royalists in Yemen in 1962. Egyptian forces were not highly successful in their intervention in Yemen, however. Egyptian troops were still bogged down there when the 1967 war with Israel broke out.

An Israeli preemptive strike destroyed most of the Egyptian air force at its bases on 5 June 1967 and defeated the Arab forces in the six-day conflict. Egypt lost the Sinai, and Nasser announced his resignation, setting off mass demonstrations by citizens who refused to let him step down. His primary military commander, Marshal Hakem Amr, also resigned and allegedly committed suicide.

Nasser supported a war of attrition against Israel that continued until 1970. His Pan-Arab ideals also committed Egypt to a key role regarding the Palestinian leadership. Palestinian and Syrian offensives led to an inter-Arab crisis known as Black September (1970) in which the Palestinians were expelled from Jordan. Nasser was personally involved in negotiating the aftermath of this crisis just prior to his death in 1970. Succeeded by President Anwar Sadat, another member of the Free Officers group, Egypt gradually moved away from several of its Cold War ideals, received more Arab aid and tourism in the 1970s, and courted Western powers.

In 1973 Sadat decided to join forces with Syria and launched the 1973 Yom Kippur War against Israel. This time the Egyptians struck first, catching the Israelis off-guard. Egyptian troops crossed the Suez Canal, a triumph for them, but the Israelis soon retook the Sinai and crossed the canal themselves, frustrating both the Soviet Union, which backed Egypt, and the United States, which had sent more weapons to Israel. But negotiations at the end of the conflict improved Egypt's strategic position and control over the Suez Canal.

Sadat had already made administrative and political changes, ousting socialist radicals, opening Egypt's closed economy with Law No. 44, and modernizing the military. Because Egypt's army had suffered most heavily from its role in the Arab-Israeli wars, Sadat decided to pursue a different strategy. He traveled to Jerusalem in 1977 to lay the groundwork for a peace agreement with Israel that was ultimately achieved in the 1979 Camp David Accords. This agreement returned the Sinai Peninsula to Egyptian control. Egypt's participation in a bilateral agreement with Israel was very unpopular with other Arab nations, however, who promptly cut off aid and tourism to the country for a time and expelled Egypt from the Arab League. Because of other political issues, including factionalism and chafing at the paternalism of the political order, the peace agreement became unpopular with many Egyptians who had not initially opposed it.

Islamic fundamentalist groups began to emerge in Egypt in the 1970s. Elements of the Muslim Brotherhood had been radicalized by exile or imprisonment during the Nasser era. New groups arose too, and one attempted but failed to kill Sadat at the Military Technical Academy. The radical Jihad Organization grew in the late 1970s, and one of its members, an Egyptian army officer, assassinated Sadat at a military review in October 1981.

Under Sadat's successor, Hosni Mubarak, the country continued its economic opening to the West via privatization and joint ventures, stressing defense while maintaining a large army. The most important challenge to the state in the 1980s and early 1990s came from Islamist groups, which mounted attacks against local officials and tourists and opposed normalized relations with Israel.

Binder, Leonard. In a Moment of Enthusiasm: Political Power and the Second Stratum in Egypt. Chicago: University of Chicago, 1978.