Spanish-speaking Central American nation covering 8,124 square miles, slightly larger than the U.S. state of New Jersey. El Salvador, with a 1945 population of nearly 2 million people, is bordered to the west by Guatemala, to the north and east by Honduras, and to the south by the Pacific Ocean. After independence from Spain in 1821, the phenomenal rise of coffee consumption greatly transformed El Salvador in the last thirty years of the Page 632  |  Top of Articlenineteenth century. For much of its subsequent history, the country would be dominated by a small group of wealthy coffee growers and their military allies. Representatives of the Fourteen Families (the economic elite) monopolized politics through the 1920s and retained considerable power until the 1980s.

In 1932, after the collapse of coffee prices precipitated by the Great Depression, a peasant uprising erupted that was supported by the Communist Party of El Salvador. The rebellion was led by Augustín Farabundo Martí. The army's repression of the uprising (known as La Matanza, or The Slaughter) resulted in 30,000 deaths and inaugurated several decades of harsh military rule. Martí was executed by the army, but his name was preserved in the title of the Farabundo Martí Liberation Front (FMLN) guerrilla organization.

During 1959–1965, modest economic growth increased the size of the Salvadoran middle class. In spite of this modest progress, however, poverty and high unemployment continued to polarize society. The peasantry was especially oppressed, as there was precious little land available to them for independent cultivation. In 1972 the military arrested and removed from power the popularly elected civilian president José Napoleón Duarte. Army repression quickly radicalized the population, and the first armed-struggle movements began to coalesce by the mid-1970s.

In October 1979, alarmed by signs of growing violence and revolutionary upheaval, army officers carried out a coup against the government of General Humberto Romero. The coup brought to power a series of military-civilian juntas whose reformist officers and civilians were weakened after only a few months in power. By the mid-1980s, political power had fallen to conservative military figures in alliance with the Christian Democrats, with Duarte as president.

As the country sank into civil war, the Duarte government implemented wide-ranging social and economic reforms. These focused particularly on land and agrarian reforms. However, Duarte was unable to control the paramilitary terror waged by the armed forces against civilians suspected of sympathizing with the FMLN. On 28 March 1980, a right-wing death squad murdered Catholic Archbishop Oscar Romero, who had criticized the military's terror tactics and the U.S. support for the government.

With the advent of Ronald Reagan's presidency in 1981, the civil war in El Salvador became a central piece in what became known as the Second Cold War in the Americas. The U.S. government accused Cuba, the Soviet Union, and the newly installed Sandinista government in Nicaragua of supporting and arming FMLN guerrillas in El Salvador. To counter this, the Reagan administration provided the country with $6 billion in military and economic aid during 1981–1992.

The growing evidence linking the Salvadoran military and government to the death squads led to widespread criticism of U.S. policy in El Salvador. The uproar over the army's murder of six Jesuit academics in November 1989, the 1990 electoral defeat of the Sandinistas in Nicaragua, the collapse of the Soviet Union in December 1991, and the sense that a stalemate had Page 633  |  Top of Articlebeen reached in the civil war encouraged moves for a negotiated settlement of the conflict. In April 1990 the United Nations (UN) began to supervise negotiations between the Salvadoran government and the FMLN, and a cease-fire was signed in January 1992. 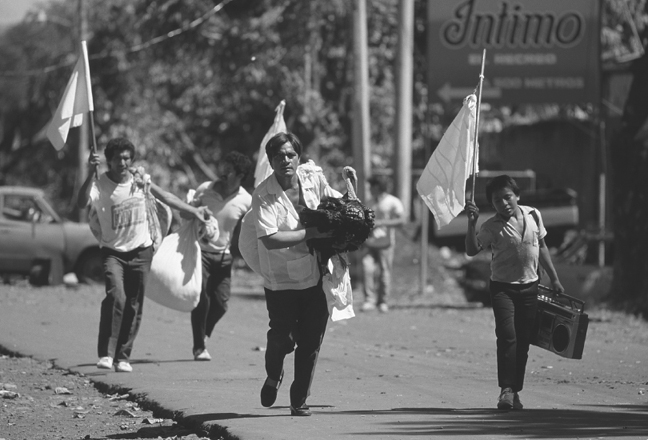 Under the UN-brokered end to hostilities, the Salvadoran Army and police forces were purged of their worst human rights violators, and the FMLN became a legalized political party. Measures to achieve national reconciliation and to reincorporate FMLN guerrilla and army forces into civilian life have only been partially successful, however. The end of the civil war has not been able to resolve the conflicts created by a legacy of more than 75,000 war-related deaths.