Located on the west-central African coast, Ghana, formerly the British colony of the Gold Coast, was the first sub-Saharan African nation to achieve independence from European colonial rule. Just under 150,000 square miles in area, Gold Coast had a population of some 4 million people in 1945 and 6 million when it attained independence on 6 March 1957. The new nation captured the attention of aspiring nationalists, colonial rulers, and leaders in Page 823  |  Top of Articleboth the East and West. Each looked to Ghana's experience to predict the impact of African decolonization on the global balance of power. 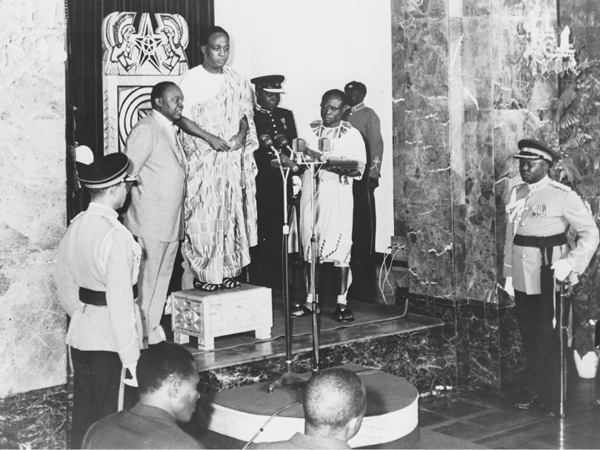 Dr. Kwame Nkrumah, standing on a stool, being sworn in by Arku Korsah as the first president of the Republic of Ghana in Accra in 1960. (Library of Congress)

The push for independence in the Gold Coast began in earnest in 1947 under the leadership of Kwame Nkrumah, founder of the Convention People's Party (CPP). Jailed in 1951 while agitating against colonialism, Nkrumah won the colony's first general election from his prison cell and was released to serve as the leader of government business in the colonial parliament. He became prime minister of the Gold Coast in 1952, won reelection in 1954 and 1956, and became prime minister of Ghana in March 1957.

Ghana emerged from colonial rule with excellent prospects of economic viability. The world's leading producer of cocoa, Ghana also produced nearly 10 percent of the world's gold. Rich in diamonds, bauxite, and timber, the country maintained a low national debt and strong foreign currency reserves. Politically and administratively, Ghana was in good standing, having worked with the British to create a stable parliamentary government and establish an educated and well-trained civil service.

In international affairs, Nkrumah's policies reflected his commitment to nonalignment and his intention to blend capitalism and socialism. Courting the economic support of the West and the ideological backing of the East, he attempted to steer a path between the two Cold War blocs, keep Cold War geopolitics out of Africa, and lead the continent to a position of respect in the world community. His Pan-African agenda included political and financial support of African states pursuing liberation.

Nkrumah demanded strong, centralized control of Ghana to achieve his goals. Within a year of independence the government passed legislation enabling the prime minister to detain political opponents without trial. Limits on freedoms of speech and the press followed in 1958 as Nkrumah established a dictatorial regime. In 1960, when Ghana became a republic, Nkrumah became president for life. By a 1964 referendum the CPP became the sole party of the state.

The failing economy and repressive policies led to the overthrow of the CPP government on 24 February 1966 while Nkrumah was visiting China. He sought asylum in Guinea, where he remained until his death in 1972.

Acheampong suspended the constitution and established the military-controlled National Redemption Council (NRC). Military control relaxed in 1974 as the government concentrated on economic development. In 1978, however, the military leadership removed Acheampong from office, giving Page 825  |  Top of Articlepower to General Frederick W. Akuffo. Less than a year later, Akuffo was overthrown by Flight Lieutenant Jerry John Rawlings, who, in an effort to do away with the opposition, arranged the public execution of Acheampong, Akuffo, and six additional high-ranking military officers on grounds of corruption. Countless public servants were also summarily dismissed and their assets confiscated. Rawlings stepped down in September 1979, transferring power to civilian President Hilla Limann and the People's National Party (PNP).

Difficulties in the cocoa industry, the mainstay of Ghana's economy, plagued the PNP government. As inflation spiraled, Rawlings led a coup to depose Limann on 31 December 1981. Rawlings's Provisional National Defense Ruling Council (PNDC) instituted liberal economic reform under authoritarian rule. In 1983 Rawlings instituted a structural adjustment plan with the cooperation of the International Monetary Fund (IMF) and the World Bank. While Rawlings enjoyed popular support as a leader who returned national pride to the people, his government undertook brutal repression against any form of opposition. Allegations of human rights abuses were commonplace. As Ghana's situation improved, popular pressure induced the government to adopt a new multiparty constitution in April 1992. On 3 November 1992 Rawlings, representing the National Democratic Congress (NDC), was elected president.

Rawlings served two consecutive terms as president. In the 2000 elections, John Agyekum Kufuor of the New Patriotic Party (NPP) won victory over the NDC. Kufuor took office in January 2001, the first peaceful and democratic transfer of power since independence. Kufuor was reelected in December 2004.

Montgomery, Mary E. “The Eyes of the World Were Watching: Ghana, Great Britain, and the United States, 1957–1966.” Unpublished doctoral diss., University of Maryland, 2004.