Vietnamese nationalist, founder of the Vietnamese Communist Party (1930), and first president of the Democratic Republic of Vietnam (1946-1969). Ho Page 913  |  Top of Articleis considered the most influential political figure of modern Vietnam. Born Nguyen Sinh Cung on 19 May 1890 in Kimlien, Annam, Vietnam, his father was a Confucian scholar who had served in the Vietnamese imperial bureaucracy but resigned to protest the French occupation of his country. Nguyen received his secondary education at the prestigious National Academy, a French-style lycée in Hue. In 1911 he hired on as a merchant ship cook, traveling to the United States, Africa, and Europe. He then became first a photography assistant and then an assistant pastry chef in London. With the beginning of World War I, Nguyen moved to Paris, where he became active in the French Socialist Party. Changing his name to Nguyen Ai Quoc (Nguyen the Patriot), he became a leader in the large Indo-Chinese community in France. After the war, he helped draft a petition to the Allied leaders at the Paris Peace Conference demanding self-determination for colonial peoples; the petition was ignored.

By the early 1940s Nguyen had taken the name Ho Chi Minh (Bearer of Light). He left Hong Kong and returned to Vietnam in early 1941, where he formed a broad nationalist alliance, the League for the Independence of Vietnam (Viet Minh), to combat both the French and Japanese occupations. The Viet Minh generally downplayed orthodox communist ideology and emphasized anti-imperialism and land reform, although it was dominated by the ICP. 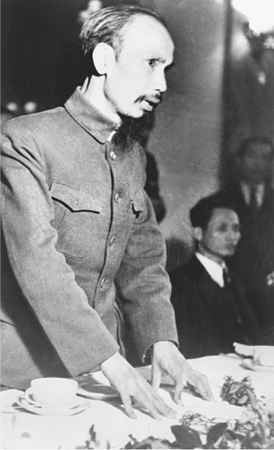 Pictured here in 1954, Vietnamese communist and nationalist Ho Chi Minh founded the Indochina Communist Party in 1930 and was president of the Democratic Republic of Vietnam (DRV, North Vietnam) from 1945 to 1969. (Library of Congress)

During World War II Ho shuttled between Vietnam and China to build support for his movement. He was held in detention for a year in China by the anticommunist Chinese Guomindang (GMD, Nationalists), who released him in 1944. He had also worked with the U.S. Office of Strategic Services (OSS). When Japan surrendered in August 1945, the Viet Minh occupied Hanoi, and Ho established the Democratic Republic of Vietnam (DRV, North Vietnam). He became president of the newly formed nation on 2 March 1946. Ho sought to avoid hostilities with France, but differences between the Viet Minh nationalists and the French, who steadfastly refused to give up Page 914  |  Top of Articletheir hold on Vietnam, led to fighting and the beginning of the Indochina War in December 1946.

By the early 1940s Nguyen had taken the name Ho Chi Minh (Bearer of Light).

During the eight-year conflict against the French, Ho played an active part in policy formulation, while Viet Minh General Vo Nguyen Giap was chief military strategist. Following the defeat of the French at the Battle of Dien Bien Phu in 1954, Vietnam was divided along the 17th Parallel, with elections in North Vietnam and the Republic of Vietnam (RVN, South Vietnam) scheduled for 1956. When South Vietnamese President Ngo Dinh Diem refused to accede to the elections, with the blessing of U.S. President Dwight D. Eisenhower's administration, fighting resumed in the south and in 1960 Ho and the North Vietnamese leadership decided to support it. Although Ho was certainly a staunch communist, he was first and foremost a Vietnamese nationalist, determined to see his nation unified no matter the cost.

During the subsequent long war with the United States, Ho remained an important symbol of nationalist resistance and played an active part in formulating North Vietnamese policy. He was primarily responsible for North Vietnamese dealings with both the Soviet Union and the People's Republic of China (PRC). Ho did not live to see his dream of a united Vietnam realized. He died in Hanoi on 3 September 1969. In 1975, when North Vietnamese troops were victorious, the South Vietnamese capital of Saigon was renamed Ho Chi Minh City in his honor. Today, Ho's body is on public display in a mausoleum in Hanoi.