President and dictator of Iraq (1979-2003). Born on 28 April 1937 in the village of Al-Awja, near Tikrit, to a family of sheepherders, Saddam Hussein attended a secular school in Baghdad and in 1957 joined the Baath Party, a radical secular-socialist party that embraced Pan-Arabism. Although revolutionists, Iraqi Baathists did not support General Abdul Karim Qassim's ouster of the Iraqi monarchy in 1958.

Wounded in an unsuccessful attempt to assassinate Qassim in 1959, Hussein subsequently fled the country but returned after the 1963 Baathist coup and began his rise in the party, although he was again imprisoned in 1964. Escaping in 1966, Hussein continued to ascend through the party's ranks, becoming second in authority when the party took full and uncontested control of Iraq in 1968 under the leadership of General Ahmed Hassan al-Bakr, a relative of Hussein. The elderly al-Bakr gradually relinquished power to Hussein so that he eventually controlled most of the government. Hussein became president when al-Bakr resigned, allegedly because of illness, in July 1979. A week after taking power, Hussein led a meeting of Baath leaders during which the names of his potential challengers were read aloud. They were then escorted from the room and shot. Because Iraq was rent by ethnic and religious divisions, Hussein ruled through a tight web of relatives and associates from Tikrit, backed by the Sunni Muslim minority. He promoted economic development through Iraqi oil production, which accounted for 10 percent of known world reserves. His modernization was along Western lines, with limited roles for women and a secular legal system. He also promoted the idea of Iraqi nationalism, emphasizing the roles of Kings Hammurabi and Nebuchadnezzar.

Before assuming the presidency, Hussein had courted both the West and the Soviet Union, resulting in arms deals with the Soviets and close relations with that country and France. He was also instrumental in convincing the shah of Iran, Reza Pahlavi, to curb his support of Iraqi Kurds. Hussein's efforts to take advantage of the superpowers’ Cold War rivalry, including rapprochement with Iran, fell apart with the overthrow of the shah in 1979. The shah's successor, the Ayatollah Ruhollah Khomeini, a radical, fundamentalist Muslim, bitterly opposed Hussein because of his Sunni background and secularism. 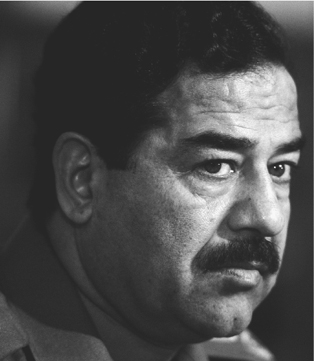 After a period of repeated border skirmishes, Iraq declared war on Iran in September 1980. Hussein's ostensible dispute concerned a contested border, but he also feared Iran's fundamentalism and its support for the Iraqi Shia Muslim majority. Initial success gave way to Iraqi defeats in the face of human-wave attacks and, ultimately, a stalemate. By 1982 Hussein was ready to end the war, but fighting continued. In 1988 the United Nations (UN) finally Page 955  |  Top of Articlebrokered a cease-fire, but not before the war had devastated both nations. The war left Iraq heavily in debt, and Hussein requested relief from his major creditors, including the United States, Kuwait, and Saudi Arabia. He also sought to maintain high oil prices. His efforts were in vain. Creditors refused to write off their debts, and Kuwait maintained a high oil output, forcing OPEC to follow suit.

Hussein responded by declaring Kuwait a rogue province of Iraq. He was also enraged by Kuwaiti slant-drilling into Iraqi oil fields. His demands became more strident, and after securing what he believed to be U.S. acquiescence, he attacked Kuwait on 2 August 1990. However, he miscalculated the U.S. reaction. President George H. W. Bush assembled an international military coalition, built up forces in Saudi Arabia (Operation DESERT SHIELD), and then commenced a relentless bombing campaign against Iraq in January 1991. The ground war of 24–28 February resulted in a crushing defeat of Iraqi forces. Although Hussein withdrew from Kuwait, coalition forces did not seek his overthrow. He remained in power, ruling a nation devastated by two recent wars.

Hussein retained control of Iraq for another decade, during which he brutally suppressed Kurdish and Shia revolts, relinquished limited autonomy to the Kurds, acquiesced to the destruction of stockpiles of chemical weapons, and pursued a dilatory response to UN efforts to monitor his weapons programs. Convinced—wrongly as it turned out—that Hussein had been building and stockpiling weapons of mass destruction, President George W. Bush asked for and received authorization from Congress to wage war against Iraq. U.S. and allied forces invaded Iraq in March 2003. Coalition forces took Baghdad on 9 April 2003 and captured Hussein on 14 December 2003 to be brought to trial on charges of war crimes and crimes against humanity.

On 5 November 2006, the Iraqi Special Tribunal found Hussein guilty in the deaths of 148 Shiite Muslims in 1982 whose murders he had ordered. That same day, he was sentenced to hang. On 21 August 2006, a second trial had begun on charges that Hussein had committed genocide and other atrocities by ordering the systematic extermination of northern Iraqi Kurds during 1987–1988, resulting in as many as 180,000 deaths. Before the second trial moved into high gear, however, Hussein filed an appeal, which was rejected by the Iraqi Court on 26 December 2006. Four days later, on 30 December 2006, Hussein was executed by hanging in Baghdad.