Middle Eastern nation covering 168,753 square miles, slightly smaller than the U.S. state of California, with a 1945 population of some 4.6 million people. Iraq borders on Saudi Arabia to the west and south, Kuwait and the Persian Gulf to the south, Iran to the east, and Syria and Turkey to the north. Iraq's geographic position in the Middle East and its large reserves of oil made it a Page 1012  |  Top of Articlevital strategic interest for both the United States and the Soviet Union during the Cold War. However, volatile domestic politics made it an unreliable ally.

The British received a mandate over Iraq following World War I, working through King Faisal ibn Husayn, one of the key leaders of the Arab revolt against the Ottomans during the war. Faisal established a Westward-focused Iraqi government that dominated Iraqi politics until 1958. This orientation to the West was in conflict with strong Iraqi nationalism beneath the surface, generating constant friction between the government and its opposition.

Iraq achieved independence from Britain in 1932. Faisal's Sunni Muslim–dominated government, backed by the British-trained and -equipped Sunni-dominated military, maintained order. The large Kurdish minority and Shia Muslim majority were, however, sufficiently powerful to threaten the government. Unfortunately for national stability, Faisal, an adroit politician who understood well the challenges of ruling Iraq, died of a heart attack in September 1933. His twenty-one-year-old son, Ghazi, succeeded him. In the first three years of Ghazi's rule the government changed three times: a powerful civilian prime minister was replaced by a Western-oriented military leadership, which in turn was replaced by an Arab nationalist military leadership. When Ghazi died suddenly in April 1939, there was another power struggle between nationalistic military officers and a civilian faction led by the appointed royal regent, Abd al-Ilah. Efforts by the military to wrest control from the regent resulted in Britain's reoccupation of Iraq in 1940, which lasted until 1945.

Iraq emerged from World War II led by the pro-British al-Ilah and Prime Minister Nuri al-Said. Despite economic strides made in the immediate post–World War II period, the political climate in Iraq remained as unstable as ever. The 1948 defeat of Arab forces by Israel, the overthrow of the pro-Western Egyptian King Fahd in 1952, and the rise of the anti-Western Mohammed Mossadegh government in Iran all encouraged anti-Western factions in Iraq. In 1955, Iraq joined the pro-Western Baghdad Pact, allying itself with Turkey, Iran, and Pakistan in a mutual defense agreement sponsored by the United States.

The Baghdad Pact was one factor setting in motion the forces that drove Cairo and Moscow closer together. More important for Iraqi history, the pact was a direct affront to the long-simmering nationalist sentiments within the Iraqi Army officer corps. It became the catalyst that ignited the 1958 revolution—the first in a string of coups and countercoups that would plague Iraq until the Baathists consolidated power in 1968.

The 1958 coup was led by a secret nationalist organization known as the Free Officers Movement. On 14 July 1958 its members seized control of Baghdad and executed King Faisal II and al-Said. The revolutionaries then abolished the monarchy, proclaimed Iraq a republic, and sought closer ties to the Soviet Union.

Colonel Abd al-Karim Qasim had led the coup, but his policies created a great many internal and external enemies, and in February 1963 a faction of army officers allied with the Baath Party overthrew Qasim. He was replaced Page 1013  |  Top of Articleby his former partner, Abd al-Salam Arif, as president. A Baathist officer, Colonel Ahmad Hassan al-Bakr, became premier. 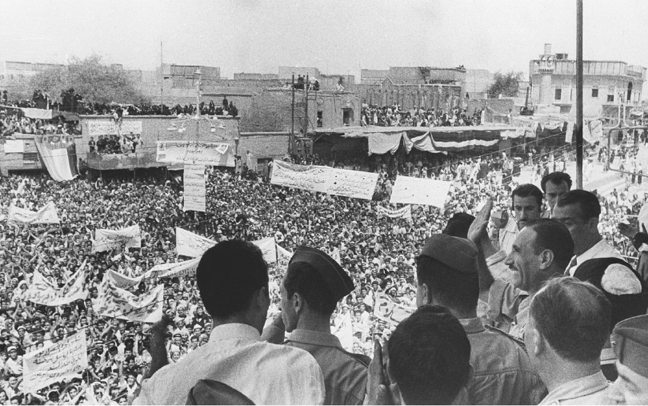 Vice Premier Abd al-Salam Arif addresses a crowd in An Najaf, Iraq, explaining the objectives and reforms of the new government on 9 August 1958. Colonel Arif and General Abd al-Karim Qasim overthrew the ruling monarchy in a coup d'etat and took control of the new Iraqi republic. (Bettmann/Corbis)

Again, internal dissension among the revolutionaries prevailed. By 1964, Arif had removed the Baathists from positions of authority and had many of them arrested. In September 1965 he appointed as premier the distinguished civilian diplomat and lawyer Abd al-Rahman al-Bazzaz, who formed a new government. His reformist policies were short-lived, however. When Arif was killed in a helicopter crash in 1966, army leaders quickly forced the new president, Arif's elder brother Abd al-Rahman Arif, to oust al-Bazzaz.

In July 1968, a final coup occurred in Iraq. The Baath Party, resurgent after being brushed aside by Arif, joined with a small group of key army officers and laid siege to the Arif regime. Arif was allowed to leave the country in exile. The Baath Party then took over, led by al-Bakr, who had briefly been premier in 1963. His ruthless lieutenant, Saddam Hussein, assisted him. After establishing control of the country, the Baathists eliminated their army rivals by posting them outside of Iraq and threatening their lives. Challenges from the Shia and the Kurds precluded the party from aggressively pursuing domestic social reforms, although it did not stop the leaders from continuing the strong friendship with the Soviet Union. In 1972 the relationship with the Soviets culminated in a treaty of friendship.

In 1979, Iraq underwent the first change of leadership in two decades that was not directly associated with a coup or revolution. Al-Bakr retired and was replaced by Hussein. Hussein's assumption of power was accompanied by a purge of dozens of top party officials; twenty-two members of the leadership were summarily executed. Although the structure of the Baath Party did not fundamentally change, after the events of July 1979 the Baathist rule of Iraq became much more the personal rule of Hussein. The party was reduced to being an extension of his personal power.

The first major test of Hussein's leadership was Iraq's relations with Iran. The new Iranian revolutionary government had become a major source of anti-Baathist agitation and propaganda. The propaganda was particularly effective among Iraq's Shia majority. Border clashes between the two countries increased, and on 17 September 1980 Hussein announced that he was reassuming control of the Shatt al-Arab and abrogating the 1975 agreement with Mohammad Reza Pahlavi, the shah of Iran. On 21 September, Iraqi forces invaded Iran. Iran's fundamentalist leader, the Ayatollah Ruhollah Khomeini, viewed the war in theological and personal terms and was therefore unwilling to compromise. This intransigence resulted in a prolonged war with immense costs in terms of capital and casualties on both sides. An Iranian counteroffensive eventually won back most of the invaded territory, and Iranian forces made significant gains into Iraq. The Iraqis, however, were successful on the diplomatic front. In addition to continued and strong support from their Soviet allies, the Iraqis also managed to build support among the other Persian Gulf states as well as in Western Europe and the United States. The United States and other nations contributed intelligence support, weapons, financing, and technology to the Iraqi war effort.

In 1988, allied help, Iraqi battlefield success, and the deepening isolation of Iran forced the Iranians to agree to a cease-fire. The war effectively ended with a return to the borders and conditions of the 1975 treaty with the shah of Iran. With the conclusion of the war, Iraqi prestige was running high. Its military was formidable, but its economy had been severely damaged by the war, and the country was deeply in debt to many of its Arab neighbors.

Hussein's decision in 1990 to invade Kuwait would lead to appalling living conditions in Iraq and ultimately to the destruction of his regime thirteen years later. He used several pretexts for going to war. The return of the Shatt al-Arab to dual ownership after the Iran-Iraq War effectively denied its use by Iraq. This in turn caused Iraq to renew the traditional dispute over borders and access to the Persian Gulf with Kuwait. In addition, Iraq was facing huge financial deficits, as Hussein's economic and military programs plus the war debt cost much more than Iraqi oil revenue brought in. These conditions caused the Hussein regime to develop an elaborate theory that connected Israel, the United States, and Kuwait in a scheme to thwart Iraq's ability to achieve its goal of economic prosperity and regional military dominance. The solution to this conspiracy was to use Iraq's military capabilities to remove the alleged source of its economic woes by invading and occupying Kuwait. Iraq also accused Kuwait of driving down the price of oil by excessive production Page 1015  |  Top of Articleand of slant-drilling into Iraqi fields. In addition, Iraq claimed Kuwait as a runaway province.

Iraqi forces invaded Kuwait on 2 August 1990. The invasion was a demonstration of Hussein's fundamental misunderstanding of the basic changes that had recently occurred internationally. The Cold War was ending and with it the ability of a regional power such as Iraq, with close ties to the Soviet Union, to act with some expectation of protection from its ally. In the face of Iraqi ignorance and intransigence, U.S. President George H. W. Bush obtained United Nations (UN) support, forged an international coalition, and deployed an unprecedented multilateral military force to the region. In January 1991, the U.S.-led force launched a comprehensive military effort with a strategic air campaign that targeted Iraq's command and control, infrastructure, and ground forces. The air campaign was followed by a short and decisive one hundred–hour ground war that not only liberated Kuwait but destroyed the bulk of Hussein's military capability.

Subsequent to the war, Hussein sought to reestablish Iraq as a regional power. This required that he subvert and avoid UN sanctions placed on Iraq as a result of the war. He also ruthlessly suppressed uprisings by both the Kurds and Shiite Muslims. Ultimately, Hussein's miscalculations, disingenuous relations with the United States and the UN, and another change in the international situation caused by the 11 September 2001 terrorist attacks in the United States resulted in a second U.S.-led invasion, the destruction of the Baathist regime in March 2003, and the execution of Hussein in December 2006.