Congolese politician and dictator (1965-1997). Born Joseph Désiré Mobutu on 14 October 1930 in Lisala in the former Belgian colony of the Congo (Zaire), Mobutu Sese Seko was educated in Belgian missionary schools. Expelled from school in 1950, he served in the colonial army during 1950-1956. After he left the service, he became a journalist for the L'Avenir news journal.

Mobutu was appointed army chief of staff by the Congo's first prime minister, Patrice Lumumba, in 1960. On 14 September 1960, after a showdown between Lumumba and President Joseph Kasavubu, Mobutu announced that he was neutralizing both leaders by launching a coup. Not yet strong enough to form his own government, he grudgingly accepted Kasavubu as president. Relations between Mobutu and Lumumba steadily worsened, however, and Mobutu was among those who plotted the assassination of Lumumba in January 1961.

Following Lumumba's murder, Mobutu remained out of the political limelight for several years while consolidating his power base behind the scenes. On 25 November 1965, he staged a second coup, bringing him to sole power. He formed his own political party, the Mouvement Populaire de la Révolution (MPR, Popular Movement of the Revolution); outlawed all other political parties; and dealt harshly with opponents. 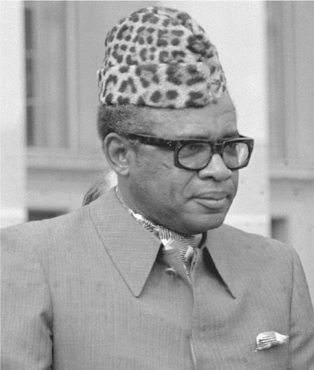 President Mobutu Sese Seko of Zaire. During the Cold War, the United States feared communist expansion into Africa by the Soviet Union and therefore supported the junta led by Mobutu in 1965. Mobutu consolidated his power, created a single-party state, and ruled Zaire until he was overthrown in 1997. (U.S. Department of Defense)

As part of his national authenticity movement, Mobutu changed the name of the Congo to Zaire in 1971 and changed his own name to Mobutu Sese Seko the following year. In a bid to rid Zaire of colonial influences, he mandated that all citizens drop their Christian names in favor of Africanized ones. As head of state Mobutu promised stability and order, and although there was little internal dissent during his repressive reign, rebellions in the Shaba Page 1380  |  Top of ArticleProvince during 1977-1978, which were brutally repressed, demonstrated that serious opposition to his rule existed.

Mobutu ruled for thirty-two years as an iron-fisted autocrat, years that have become known as the kleptocracy based on evidence that he stole billions of dollars from his own people.

Only those loyal to Mobutu served in the civil administration; most were susceptible to bribery, cronyism, and corruption. Nevertheless, Western aid, especially from the United States and Belgium, filled Mobutu's coffers, and he obliged with strong pro-Western, anti-Soviet policies. But he also had an independent streak; he shrewdly catered to the West by taking advantage of Cold War rivalries while maintaining his own cult of personality at home.

Mobutu ruled for thirty-two years as an iron-fisted autocrat, years that have become known as the kleptocracy based on evidence that he stole billions of dollars from his own people. Under the guise of Zairianization, Mobutu nationalized between 1,500 and 2,000 foreign-owned industries and channeled the profits from these to his own personal accounts. Not surprisingly, rural areas and the nation's vast peasantry remained wholly neglected.

After the Cold War wound down in the early 1990s, the United States tried to push Mobutu to accept political and economic reforms. He was reluctant to do so and found himself alone facing the rebel forces of Laurent Kabila. In the meantime, the country's economy was in shambles, and Mobutu was powerless to reverse the economic slide. In May 1997 he was forced to relinquish power and was expelled from the country by Kabila's forces. Mobutu died in Rabat, Morocco, on 7 September 1997.