Egyptian nationalist politician, vice president (1953-1954), premier (1954-1956), and president (1956-1970). Born in Beni Mor, Egypt, on 16 January 1918, the son of a civil servant, Gamal Abdel Nasser at an early age developed great antipathy toward Britain's rule over Egypt, setting the stage for his later championing of Egyptian nationalism and Pan-Arabism. Settling on a military career, he graduated from the Egyptian Royal Military Academy in 1936 and was commissioned as a second lieutenant. While stationed at a post in the Sudan, he met and became friends with future Egyptian president Anwar Sadat. Based on their mutual dislike of the British, they eventually laid the groundwork for a secret anti-British organization that came to be called the Free Officers.

The Free Officers recruited Egyptian military officers who wished to bring about an end to British colonial rule and to oust King Farouk I. After Page 1443  |  Top of Articlemonths of painstaking planning, the organization fomented a revolt against Farouk's government on 23 July 1952. Three days later, the king abdicated and fled Egypt. Upon Farouk's abdication, a Revolutionary Command Council was established under the leadership of Major General Mohammad Naguib, with Nasser working behind the scenes. When the council declared Egypt a republic in June 1953, Naguib became its first president, with Nasser as vice president. Beginning in the winter of 1954, a political power struggle ensued between Nasser and Naguib. Within months, Nasser took de facto control as president of the Revolutionary Command Council. Naguib was allowed to continue as president of Egypt, although this was in reality little more than a figurehead position. 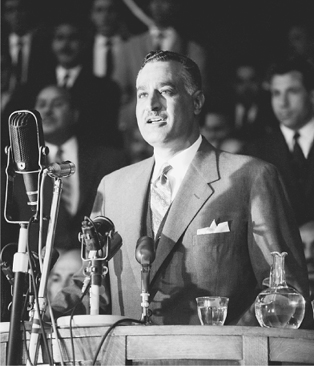 Egyptian President Gamal Abdel Nasser addressing a crowd during a visit to Algiers, 7 May 1963. (Bettmann/Corbis)

Nasser and his faction consolidated their hold on power, and after the October 1954 attempt on his life, which he blamed on Naguib, Nasser ordered Naguib arrested. Using the assassination attempt to solidify his power base, Nasser became premier of Egypt on 25 February 1955. Seven months later he also took the title of provisional president.

Nasser quickly moved to centralize his authority, creating a tightly controlled police state in which political opponents were imprisoned, intellectuals and elites disenfranchised, and industries nationalized. In June 1956 a national election occurred in which Nasser was the sole candidate for the presidency, and thus he officially became Egypt's second president.

In addition to seeking land reform and following quasi-socialist economic policies, Nasser sought to modernize Egyptian infrastructure. His public works projects included the building of a massive dam at Aswan, for which he received promises of financial support from the United States and Great Britain. He also approached the United States about purchasing arms. When the United States refused this request, fearful that the arms would be used against Israel, Nasser turned to the Soviet Union.

The Soviets saw a chance to increase their influence in the region and began negotiating an arms deal with Nasser, whereupon the United States and Britain withdrew their support for the Aswan Dam project in early July 1956. Seeing an additional opportunity to gain more influence with the Egyptians and to establish a foothold in the Middle East, the Soviet Union quickly offered to help Nasser with the dam.

Nasser used the loss of Western financial support as a pretext to nationalize the Suez Canal on 26 July 1956. This action provoked joint French, British, and Israeli military action against Egypt, beginning the Suez Crisis. On 29 October 1956 Israeli forces attacked Egypt, and two days later French and British forces attacked by air. On 5 November, French and British forces landed at Port Said, further escalating the conflict. The United States, not privy to the attack, applied great pressure on the Israelis as well as on the French and British to withdraw, which they did on 7 November. Far from Page 1444  |  Top of Articlebeing defeated, Nasser was vindicated by the Suez Crisis, and he shrewdly used this victory to further consolidate his rule at home and to promote Pan-Arabism throughout the Middle East. The Suez Crisis turned him into a hero of Middle East nationalism.

The United States applied great pressure on the Israelis as well as on the French and British to withdraw, which they did on 7 November.

In pursuit of his Pan-Arab vision, Nasser established the United Arab Republic (UAR) on 22 February 1958. Consisting of only Egypt and Syria, however, the UAR fell apart when Syria withdrew on 28 September 1961. Nevertheless, Nasser continued to promote Arab nationalism and his vision of a Pan-Arab union.

Nasser's strong-arm rule began to work against him as the years progressed. Losing some of his popular appeal at home, he attempted to reform the government, which was corrupt and riddled with cronyism. Instead, he was forced to crack down on his opponents who tried to expand their power during the attempted reorganization. In foreign affairs, in an effort to play up Arab resentment toward Israel, he signed a defense pact with Syria in November 1966. In early 1967, he began provoking the Israelis through a number of different actions, including insisting on the departure of United Nations (UN) peacekeepers from the Egyptian-Israeli border, blockading the Gulf of Aqaba, and moving troops into the Sinai.

In retaliation, on 5 June 1967 the Israelis attacked Egypt, Syria, and Jordan. The war lasted only until 9 June and proved to be a humiliating defeat for Nasser. His miscalculation further eroded his support in Egypt and blemished his reputation throughout the Middle East. In March 1969 he launched the War of Attrition against Israel, which resulted in many more Egyptian than Israeli casualties. In July 1970, he agreed to a cease-fire arrangement put forward by U.S. Secretary of State William Rogers, ending the war. By then in deteriorating health, Nasser died on 28 September 1970 in Cairo.