Central American nation encompassing 49,998 square miles, slightly bigger than the U.S. state of New York. With a 1945 population of just 1 million people, Nicaragua borders Honduras to the north, Costa Rica to the south, the Pacific Ocean to the west, and the Caribbean Sea to the east.

Nicaragua gained its independence from Spain in 1821. In 1823, Agustin Iturbide, the Mexican emperor in charge of the region, was overthrown. The United Provinces of Central America, led by Guatemala, rebelled and created a federation. Soon, each Central American entity became a republic, and the federation dissolved in 1838.

Considerable political turmoil characterized Nicaragua during the nineteenth and the twentieth centuries. The strategic position of the country attracted the attention of the larger powers, first Great Britain and then the United States. In 1850, the United States and Britain signed the Clayton-Bulwer Treaty, thereby agreeing to joint control of a canal across Nicaragua. The treaty is emblematic of American will to dominate the area, as Nicaragua's government was not even consulted before the treaty was signed.

In addition to U.S. governmental involvement in Nicaragua, there were also American adventurers, known as filibusters, always eager to be part of the Nicaraguan predicament, sometimes even in opposition to U.S. official policy. The most prominent of these filibusters was William Walker, who invaded Nicaragua in 1851. Walker's invasion was defeated by a coalition of Nicaraguan political parties in 1858, with the support of Great Britain and the economic aid of Cornelius Vanderbilt, the American financier and railroad magnate.

U.S. troops intervened repeatedly to protect the economic interests of the United States. A major intervention occurred in 1927 to stop a civil war. Some Nicaraguans resented such frequent intrusions in their national affairs and organized a guerrilla campaign led by Liberal Party General Augusto César Sandino. Although Washington considered Sandino an outlaw, many Latin Americans supported him as a resistance hero.

In 1932 Liberal leader Juan Sacasa won the presidential elections, and the United States withdrew its troops. President Sacasa appointed Anastasio Somoza as director general of the Nicaraguan Army (National Guard). In June 1936, the ambitious Somoza overthrew Sacasa and took control of the presidency and the Liberal Party. From 1936 to 1979, a Somoza dynasty ruled Nicaragua through its control of the National Guard. Before his death in 1956, Somoza had transformed the country into a family estate. His two sons, Luis and Anastasio “Tachito” Somoza Debayle, subsequently controlled Nicaragua's politics and economy.

The Somoza brothers continued their father's personal dictatorship. Congress chose Luis Somoza to complete his father's term. In 1966, Tachito became president and commander of the National Guard. Ruthless dictators who played on Cold War sensibilities, the Somozas presented themselves as the last anticommunist bulwark in Latin America. They ruled Nicaragua with fierce anticommunist rhetoric and by torturing and killing their political opponents. The Somozas controlled not only Nicaragua's politics and the army Page 1483  |  Top of Articlebut also the entire economy. In 1979, the Somoza family's personal wealth was estimated at $900 million. 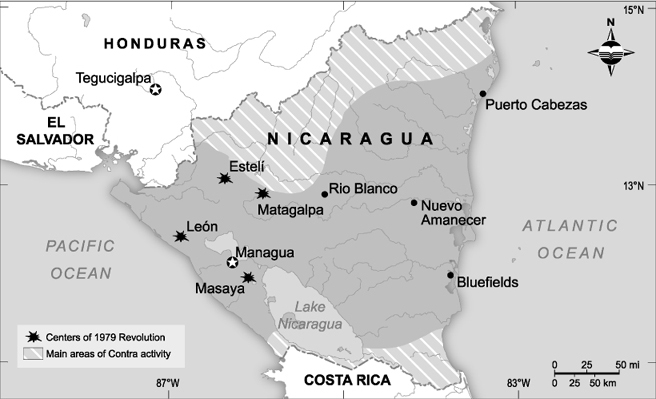 By the mid-1970s, Somoza's control began to erode. An earthquake destroyed Managua in 1972, killing more than 10,000 people and leaving many more homeless. With complete disregard of the tragedy, Somoza profited from the international aid and the control of government contracts for reconstruction. Such corruption strengthened the armed opposition known as the Sandinista Front, a radical leftist organization inspired by the 1959 Cuban Revolution. In 1974, Somoza ran for president in fraudulent elections in which the leader of the legal opposition refused to participate and which Archbishop Miguel Obando refused to recognize. Needless to say, Nicaragua remained desperately poor as the Somoza dynasty siphoned off any money earmarked for poverty mitigation and economic development. While the Somozas weaned the country from its reliance on banana imports, they did nothing to build or modernize the economy.

When Jimmy Carter became president of the United States, human rights became a central focus of U.S. policy toward Latin America. Somoza felt betrayed by an American president who placed human rights above anti-communist loyalties. The Carter administration viewed Somoza as a liability rather than an asset to the United States and began to pressure him to implement reforms.

On 10 January 1978, a plot organized by Pedro Ramos, a right-wing Cuban American exile, killed the leader of Nicaragua's moderate opposition, Pedro Page 1484  |  Top of ArticleJoaquín Chamorro. Somoza was blamed for the murder, catalyzing a united front against the dictatorship. Afraid that a reformist solution might neutralize their insurrection, the radical Sandinistas had accelerated their armed struggle in 1977 and created a national front. The Sandinista opposition found receptive friends not only in Cuba but also in Costa Rica, Venezuela, and Panama, which recognized a state of belligerency in Nicaragua. Indeed, the Organization of American States (OAS) passed a resolution declaring Somoza “the fundamental cause” of the Nicaraguan crisis. 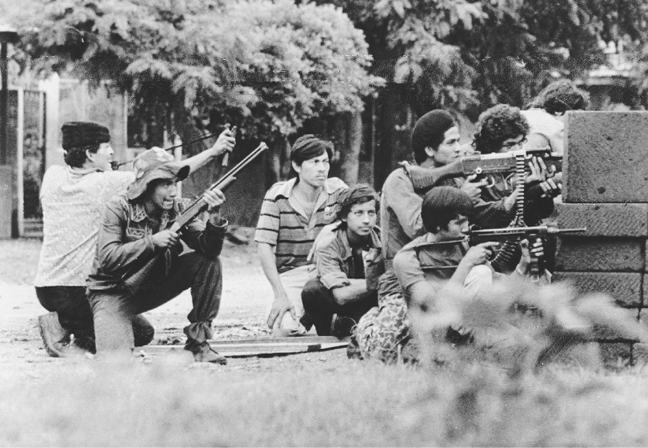 Young Sandinista guerrillas man a position in Masaya, Nicaragua, on 25 July 1979. The boy at left is armed with a slingshot. (Bettmann/Corbis)

On 28 May 1979 the opposition proclaimed a provisional government in San José, centered on a democratic program of political pluralism and a mixed economy. During the first half of 1979, the Sandinista leftists undertook a formidable guerrilla offensive with massive military aid from Cuba, Venezuela, Panama, and Costa Rica. The different Sandinista factions also reconciled among themselves, focusing on the overthrow of Somoza and suspending ideological differences. Some were social democrats, others were Marxists, and a significant group was Fidel Castro's sympathizers. On 19 July 1979, the insurrection triumphed. A Nicaraguan provisional government was inaugurated with massive popular support and international approval. According to the Inter-American Human Rights Commission, more than 45,000 Page 1485  |  Top of ArticleNicaraguans had died during the war against Somoza, and the country had suffered more than $2 billion in economic losses.

More than 45,000 Nicaraguans had died during the war against Somoza, and the country had suffered more than $2 billion in economic losses.

Carter's policy toward the Sandinistas tried to avoid a confrontation of the kind that pushed Castro into the Soviet bloc. In September 1979, Carter met with Daniel Ortega, Sergio Ramírez, and Alfonso Robelo, leaders of the new government. In the meeting, Carter and Ortega agreed not to let the past interfere with relations between the two governments. The Carter administration then announced that it would not support the ex-Somoza guardsmen who were organizing subversive activities. At the same time, Carter pointed out that human rights were a major concern of the United States. The Nicaraguan officials expressed support for the policy and committed to not aiding civil conflicts in Guatemala and El Salvador.

The end of détente by 1980 influenced the mood in both Washington and Managua. In Nicaragua, the moderate members of the junta—Robelo and Violeta Barrios de Chamorro—resigned when the Sandinistas packed the Council of State with their own supporters. In the United States, new U.S. President Ronald Reagan defined Nicaragua as a test case to stop Marxist subversion. His presidential campaign platform had called for terminating all economic aid to Nicaragua and for supporting anti-Sandinista forces.

Whereas Carter had tried to keep Nicaragua out of the East-West conflict, the Reagan administration transformed Central America into a Cold War battleground. On 9 March 1981, Reagan instructed the Central Intelligence Agency (CIA) to organize covert antigovernment actions and to support the group of Somoza loyalists led by Colonel Enrique Bermúdez who were already battling against the Sandinista government. Yet the Reagan administration faced two main obstacles in its unilateralist policy toward Nicaragua. Domestically, the U.S. Congress was reluctant to engage in a war, and it reduced and then banned aid to the anti-Sandinista forces (Contras). In Nicaragua, a significant sector of the opposition did not support the radicalization of the revolution but instead sought a third negotiated option to the Contra program. Indeed, this internal moderate opposition was critical of Reagan's support of the Contras and finally articulated an alternative to both the Sandinistas and Contras.

The civil war in Nicaragua cost more than 30,000 lives and close to $2.5 billion, without increasing the likelihood of a stable democracy or dislodging the Sandinistas from power. The ideologues behind the war in Washington and Managua provided each other with enough provocation and cannon fodder to last for more than a decade of war in Nicaragua, with important ramifications for El Salvador and Guatemala. In addition, between 1986 and 1988, congressional reports confirmed that Reagan administration officials diverted profits from arm sales to Iran to provide illegal support to the Contras in what became the Iran-Contra Affair.

Alarmed by Reagan's interventionist policy and the deterioration of Nicaraguan democracy under the Sandinistas, Mexico, Venezuela, Colombia, and Panama created the Contadora Group in January to search for a Latin American solution to the Nicaraguan problem. After democratization processes Page 1486  |  Top of Articlein South America, the Contadora Group included a support group (consisting of Argentina, Brazil, Uruguay, and Peru) that provided a unified appeal for regional agreements of peace and reconciliation among and within Central American countries and that received significant support from the democratic majority in the U.S. Congress.

In February 1989 another summit of Central American presidents held in El Salvador led the Sandinista government to agree to hold elections in early 1990. The internationally supervised elections of 25 February 1990 brought an opposition victory and a democratic transition process under the moderate leadership of Violeta Barrios de Chamorro.