African nationalist, prime minister (1957-1960), and president (1960-1966) of Ghana. Born in Nkroful on 21 September 1909, a date debated by scholars but accepted by him as accurate, Kwame Nkrumah was educated in mission schools, where he later taught. He pursued higher education at Lincoln University in Pennsylvania, and in 1943 he earned a master's degree in philosophy at the University of Pennsylvania.

Nkrumah then traveled to London in 1945 and studied at the London School of Economics. Influenced by his earlier experiences with racism in the United States and his studies of American independence and revolution, Nkrumah's politicization and nationalist views were furthered in London, where he founded the West African National Secretariat and served as joint secretary for the Fifth Pan-African Congress in 1945.

In 1947 Nkrumah returned to the African Gold Coast to lead the movement for independence. His position as general secretary of the United Gold Coast Convention (UGCC) and founder of the Convention People's Party (CPP) led to his 1950 imprisonment by British colonial authorities. In 1951 Nkrumah, still incarcerated, won the Gold Coast colony's first general election with a huge majority. Released in January 1951 as leader of the colonial parliament, he became prime minister of the Gold Coast in March 1952. He won reelection in 1954 and 1956 and became prime minister of an independent Ghana on 6 March 1957. When Ghana declared itself a republic on 1 July 1960, he became president.

Only months after independence, however, Nkrumah's regime moved toward dictatorship. As president, he championed a nonaligned foreign policy and pursued relations with both the United States and the Soviet Union. An advocate of economic growth through industrialization, he negotiated the U.S. financing of a hydroelectric dam on the Volta River, despite his vocal commitment to socialism. 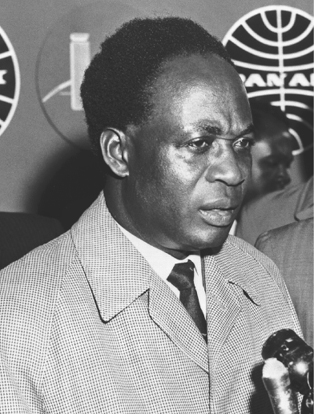 Kwame Nkrumah of Ghana led the drive for independence and became his nation's first premier in 1957 and president in 1960. (Library of Congress)

Nkrumah's popularity declined steadily, along with the Ghanaian economy. On 24 February 1966, while he traveled abroad, political opponents staged a coup in Accra. Six Page 1497  |  Top of Articledays later Nkrumah flew to Guinea, where he spent the next six years in exile. Suffering from cancer, he arranged for secret transport to Bucharest in August 1971. Nkrumah died there on 27 April 1972.