A loose association of nations opposed to Cold War entanglements that sought to create a third force between the communist bloc and the Western Bloc. The Non-Aligned Movement (NAM) was originally comprised of twenty-four Afro-Asian countries plus Yugoslavia. It held its first summit in Belgrade in September 1961. From the outset, NAM embraced issues theoretically unrelated to the Cold War, including anticolonialism, antiracism, economic development, and, under the Arab states’ influence, anti-Zionism. To date there have been thirteen summits at approximately three-year intervals. After Belgrade, NAM met in Cairo (1964); Lusaka, Zambia (1970); Algiers (1973); Colombo, Sri Lanka (1976); Havana (1979); New Delhi (1983); Harare, Zimbabwe (1986); Belgrade (1989); Jakarta, Indonesia (1992); Cartagena de Indios, Colombia (1995); Durban, South Africa (1998); and Kuala Lumpur, Malaysia (2003). In 2003, the movement had 116 members. Mutual interests in protecting state sovereignty and promoting development account for its expanding membership and durability. 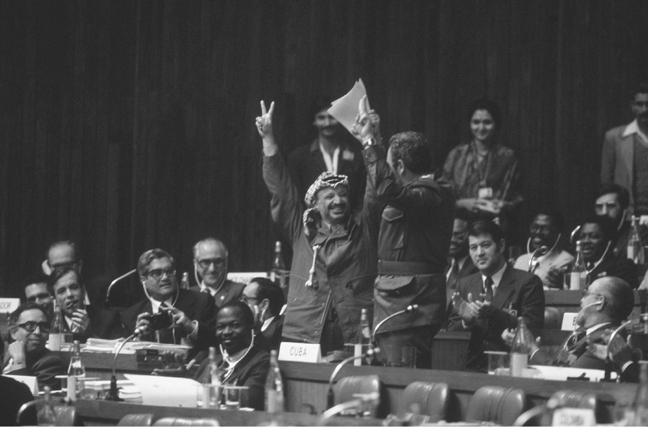 Cuban President Fidel Castro and Palestine Liberation Organization leader Yasir Arafat raise their hands together during a session at the Seventh Summit of the Non-Aligned Movement in New Delhi in March 1983. (Alain Nogues/Corbis Sygma)

Before NAM's foundation, Indonesian leader Sukarno's Asian-African Conference at Bandung in April 1955 demonstrated the value of small-state collaboration. Indian Prime Minister Jawaharlal Nehru's vaguely worded Panch Sheel (five principles of peace), which formed the basis for Sino-Indian relations and was popularized at Bandung, anticipated NAM principles by stressing mutual respect, preservation of state sovereignty, and peaceful coexistence. In the five years before the Belgrade conference, the founding countries—India, Yugoslavia, and Egypt—took exception to Great Power interference in weaker countries’ affairs and to the superpowers’ unwillingness to reduce nuclear tensions.

The simultaneous Suez Crisis and Hungarian Revolution of 1956 drew together Nehru, Yugoslavian Marshal Josip Broz Tito, and Egyptian President Gamal Abdel Nasser. Although their politics were dissimilar, they shared concerns about the Cold War, decolonization, and national independence. The emergence of sixteen African states in 1960, the intensification of South African apartheid, the worsening U.S.-Soviet relations, the Congo Intervention, the U.S.-sponsored Bay of Pigs incursion (1961), and the Second Berlin Crisis furnished the first summit's historical context.

The Belgrade meeting established enduring precedents for NAM. First, the organizational meeting, which took place in Cairo in June 1961, confined Page 1502  |  Top of Articlemembership to countries that rejected participation in what were termed “Great Power conflicts” or signaled their intention of eventually departing from them. Countries that did not fully meet these criteria could nevertheless be invited as observers. Second, the Algerian provisional government's invitation as a full member, one year before that country's independence, underscored NAM's commitment to anticolonialism. Subsequent summits conferred diplomatic recognition upon the Angolan provisional government, the Palestine Liberation Organization (PLO), the Zimbabwe African National Union/Zimbabwe African People's Union, the African National Congress (ANC) in South Africa, and the Southwest African People's Organization (SAPO) in Namibia. Third, the members reached agreement by consensus rather than by ballot, a procedure that led to criticism from the United States at later summits. Finally, Belgrade concluded with a communiqué outlining joint concerns. Although Nehru wished to make the first meeting a forum on global peace, the foremost issues were decolonization, noninterference in sovereign countries’ internal affairs, and combating racism. While the People's Republic of China (PRC) was not invited to Belgrade, NAM—as China's exclusive representative—called for its admission to the United Nations (UN).

In 2003, the movement had 116 members. Mutual interests in protecting state sovereignty and promoting development account for its expanding membership and durability.

Cairo illustrated the host country's influence over the NAM agenda. Forty-seven countries attended the 1964 summit. NAM invited all members of the new Organization of African Unity (OAU) because its 1963 charter adopted nonalignment. Under Nasser, NAM called for a Palestinian homeland three years before the PLO's foundation. Cairo was also significant for what was ignored: in October and November 1962, the PRC invaded India. At Cairo, the Chinese invasion was not mentioned because many members wished to cultivate good relations with the PRC. The selective treatment of security issues where members’ national interests were at stake typified this and subsequent meetings. The departure of many NAM founders partially accounted for the six-year hiatus between Cairo and Lusaka. Nehru died just before the Cairo summit. In the intervening years, Sukarno, Kwame Nkrumah, and Burma's U Nu were deposed.

The conference at Lusaka established the movement's minimal institutional base. The host country's leader served as NAM spokesperson between triennial meetings, and its foreign ministry and permanent UN delegation dedicated offices to NAM affairs. At Lusaka, members agreed to hold annual foreign ministers’ conferences and to work as a caucus in the UN. Occasionally, NAM has established emergency funds to support anticolonialist causes such as the Africa Fund, which assisted the antiapartheid frontline states of Mozambique, Angola, and Zimbabwe in the 1980s.

Unlike the Afro-Asian People's Solidarity Organization (AAPSO), NAM was not an adjunct of Soviet foreign policy. Certain members, such as Saudi Arabia, had close U.S. ties, while others, such as Yugoslavia, feared Soviet interference. The movement nevertheless supported certain Soviet initiatives, such as the call for two special UN disarmament sessions and the establishment of nuclear-free zones. Quick to condemn by name Western countries deemed responsible for violating developing-world countries’ sovereignty, Page 1503  |  Top of Articlesuch as the continuing U.S. naval presence at Guantánamo Bay, Cuba, NAM did not apply this standard to Soviet interventions in Czechoslovakia and Afghanistan.

Although U.S. policymakers in the 1950s decried neutralism as aiding the Soviets, successive U.S. administrations, even President Dwight Eisenhower's, retained strong relations with many uncommitted countries. Presidents Lyndon Johnson and Ronald Reagan issued reminders to the Cairo and New Delhi summits that Soviet expansion constituted another form of imperialism. The Soviets anticipated that NAM would facilitate their goal of frustrating Western–developing world alliances and of becoming eventual adherents to the Soviet bloc. A split over North-South issues in the 1970s demonstrated that Soviet and NAM interests were not identical, however.

The Non-Aligned Movement has repeatedly lobbied for economic aid to the developing world. A special NAM meeting in Cairo in 1962 called upon the UN to facilitate development, which led in early 1964 to the first UN Conference on Trade and Development (UNCTAD) in Geneva, at which the Group of 77, then the world's poorest countries and including many NAM members, was formed. At the Algiers conference and afterward, NAM called for a special UN General Assembly session on development. In 1974, the UN passed the New International Economic Order (NIEO), an agenda that sought increased technical, financial, and agricultural aid for nations in the developing world, to which the Soviets, partly for ideological reasons, showed little sympathy.

Allison, Roy. The Soviet Union and the Strategy of Non-Alignment in the Third World. Cambridge: Cambridge University Press, 1988.

Brands, H. W. The Specter of Neutralism: The United States and the Emergence of the Third World, 1947–1960. New York: Columbia University Press, 1989.

Singham, A. W., and Shirley Hune. Non-Alignment in an Age of Alignments. Westport, CT: Lawrence Hill, 1986.