Chilean general and dictator (1973 to 1990). Born in Valparaiso on 15 November 1915, Augusto Pinochet graduated in 1937 from the Chilean Escuela Militar (Military School) and was commissioned a second lieutenant in the infantry. He spent his entire adult life in military service, during which time he served as a military attaché in Washington and as a faculty member at the Military School and the Chilean War College. In 1968 he attained the rank of brigadier general and in 1971 assumed the rank of division general. In 1972 Page 1639  |  Top of Articlehe became chief of staff of the army. Then in August 1973, amid growing civil unrest, President Salvador Allende Gossens named Pinochet army commander in chief.

Along with most of Chile's high command, Pinochet was known for his conservative, anticommunist views. On 11 September 1973, he led the coup that brought down Allende's socialist government. Allende was killed during the struggle. In the wake of the coup, Pinochet directed a merciless military-style campaign against enemies of the new regime. Security and military officials arrested, detained, tortured, and executed thousands of Chileans.

The coup represented the final step in a carefully planned campaign that had received significant support from the U.S. government against the Allende government. Intelligence and monetary support funneled through the U.S. embassy, the Central Intelligence Agency (CIA), military contacts, and cooperative private organizations had helped Chilean opposition groups challenge the Allende government during 1970–1973.

Under Pinochet's authoritarian rule, the Chilean government promptly reversed its social and economic policies and promoted neoliberal, export-oriented reforms aimed at modernizing the country. Mixed results and mounting social problems generated a strong but cautious opposition movement in Chile during the 1980s. Despite public revelations of gross human rights violations during the 1970s that culminated in international trials against various officers who had served the dictatorship, Pinochet clung to power.

Confident that he would prevail, Pinochet held a plebiscite in 1988 in which Chileans were given a choice between a return to civilian rule or the continuation of the Pinochet presidency until 1997. Chileans voted against the dictator, and he was ultimately forced to relinquish the presidency on 11 March 1990, although he retained his position as army commander in chief until 1998. 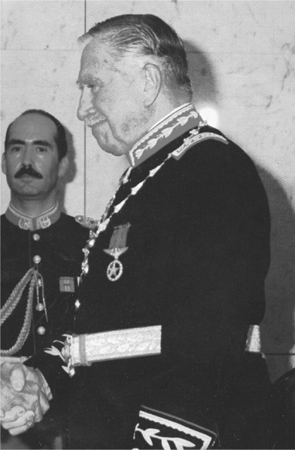 Augusto Pinochet came to power in Chile in a 1973 coup and remained the nation's military dictator until his defeat in a free election in 1990. He would spend much of his remaining years evading prosecution for human rights crimes. (Embassy of Chile)

Pinochet was arrested in London in October 1998 via an international warrant issued by a Spanish judge. International courts hounded Pinochet, intent on bringing him to trial for his various and sundry crimes as Chile's dictator. He avoided trial in Spain because of alleged ill health, was forced to return to Chile in March 2000, and was tried and convicted there. His convictions were overturned in late 2000 because his mental state was in question during the trial. In 2004, investigators discovered efforts by Pinochet to transfer financial assets out of the country illegally. This move undermined his credibility, and the government stripped him of legal immunity. In November 2005, he was charged with tax evasion for having concealed some $27 million in secret bank accounts and was ordered placed under house arrest. Never forced to stand trial and unrepentant to the end, Pinochet died in Santiago on 10 December Page 1640  |  Top of Article2006. He was accorded a military but not a state funeral. Many Chileans chose to remember him not for the abuses and atrocities of his regime but as a staunch anticommunist whose free-market policies made rapid Chilean economic growth possible.