Head of the Cambodian communist Khmer Rouge and prime minister of the Democratic Republic of Kampuchea (Cambodia) from 1976 to 1978. Born Saloth Sar in the village of Prek Sbau near the provincial capital of Kompong Thom Saloth Sar, Cambodia, on 19 May 1928, Pol Pot adopted his revolutionary name only in 1976. His parents were landowners with royal connections. He was sent to Phnom Penh at the age of six to join his brother Loth Suong, who worked in the palace as an administrator. Saloth Sar was briefly a novice in a monastery and studied radio engineering in France during 1949–1953. While there, he joined the French Communist Party.

Saloth Sar returned to Cambodia in January 1953 and began to rise within the Cambodian communist movement, becoming party leader in 1963. Rejecting an offer from Prince Sihanouk to form a coalition government, Saloth Sar fled into the jungle and organized the Khmer Rouge, a communist guerrilla army. On 13 May 1976, after defeating Lon Nol, the U.S.-backed general who had overthrown Sihanouk in a 1970 coup, Pol Pot became Cambodian prime minister and declared “Year Zero.” He and the Khmer Rouge leadership renamed the country Kampuchea and immediately set out to transform Cambodia into a rural collectivist society. He emptied the city of Phnom Penh, ordered millions of Cambodians into forced labor, and imposed other brutal policies that resulted in a holocaust against his own countrymen. It is estimated that some 1.5 million Cambodians died during Pol Pot's bloodthirsty reign.

To return Kampuchea to its “rightful” position in Indochina, Pol Pot saw the need to regain “lost” territories, launching raids on Laos, Thailand, and Vietnam beginning in 1977. In retaliation, in late 1978 forces of the Socialist Republic of Vietnam invaded Kampuchea and ousted Pol Pot from power, although he continued to wage guerrilla warfare from bases in Thailand and western Cambodia, launching raids against the Vietnamese-installed Phnom Penh government and later sabotaging the peace plan and elections sponsored by the United Nations (UN). In 1985, it was announced that Pol Pot was relinquishing command of the Khmer Rouge. He then disappeared from public view but resurfaced in 1997 when Khmer Rouge leaders in western Cambodia conducted a trial and convicted him of murdering other Khmer Rouge. Pol Pot was sentenced to house arrest but died on 15 April 1998 in Anlong Ven while being held prisoner, supposedly from a heart attack, although there is some speculation that he may have been murdered by one of his former subordinates. 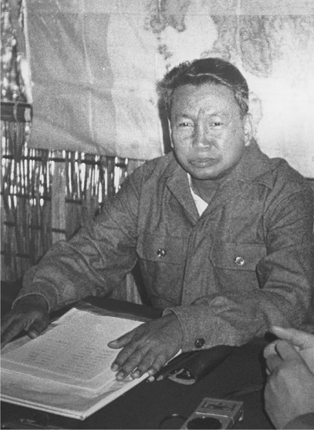 Deposed Cambodian Khmer Rouge leader Pol Pot, shown here during a clandestine meeting with Japanese journalists in his guerrilla base near the Thai-Cambodia border, 12 December 1979. (Bettmann/Corbis)

Becker, Elizabeth. When the War Was Over: Cambodia Revolution and the Voice of Its People. New York: Simon and Schuster, 1986.