Workers at the Lenin Shipyards in Gda?sk went on strike at the beginning o? August. The local strike committee, led by electrician Lech Waesa, was soon transformed into the Inter-Factory Strike Committee. It was unprecedented in both size and form, as it claimed to represent not just the shipyard workers but all Polish workers. The Strike Committee put forth a list of twenty-one demands to be met by the Polish Communist Party. These demands included the right to form independent labor unions, the right to strike, freedom of speech and press, the release of political prisoners, and other social and economic demands. On 31 August 1980, Wa?esa's committee signed an agreement in Gda?sk with Deputy Prime Minister Mieczys?aw Jagielski by which the government agreed to the workers’ demands, including the formation of independent trade unions. Similar agreements were signed in Szczecin and Jastrz”bie. Several days later, Gierek resigned his post.

As soon as the agreements were signed, workers began to organize themselves into union groups. Inter-Factory Strike Committees became Inter-Factory Founding Committees. Until this point, Polish labor unions had been an extension of the Communist Party and had no true independence.

On 17 September 1980, the Founding Committees decided to organize one umbrella labor union known as Solidarno?? (Solidarity). By this time, union membership was close to 4 million people, and the decision to form one central union was deeply troubling to Polish authorities. On 10 November 1980, following a series of difficult negotiations, Solidarity was officially registered as a union.

These demands included the right to form independent labor unions, the right to strike, freedom of speech and press, the release of political prisoners, and other social and economic demands.

Moscow and Warsaw eyed Solidarity with great trepidation. The movement was large, and Soviet leaders especially viewed its antisocialist elements Page 1845  |  Top of Articleas particularly troubling. They also feared that it would set a precedent that might be followed in other communist bloc nations. Over the next thirteen months, an uneasy relationship existed between the Communist Party and Solidarity. Solidarity was gradually realizing its demands through strikes or the threat of strikes. These demands were in most cases limited to working conditions, wages, and workers’ rights. By the end of 1981, nearly 10 million members, some 80 percent of the national workforce, had joined the movement. 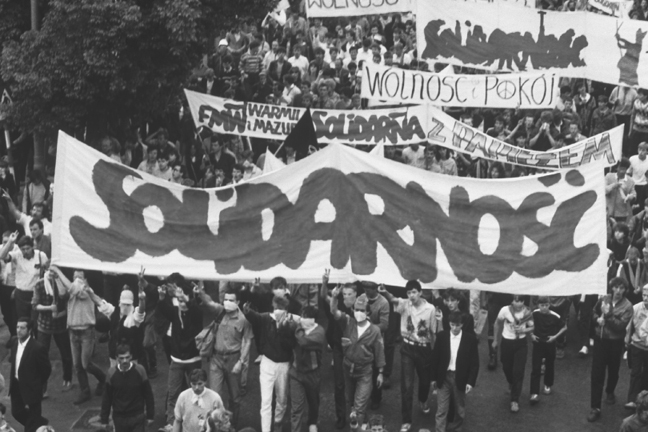 Polish authorities never fully accepted the legitimacy of Solidarity. In fact, they had resorted to stalling tactics and harassment of union activists in the hope of weakening the movement. Meanwhile, the authorities were preparing plans to crush Solidarity, by military means if necessary. Tensions between Solidarity and the government peaked during the Solidarity Congress in September-October 1981. Solidarity's 8 September 1981 “Message to the Working People of Eastern Europe,” which urged workers in other communist bloc nations to unite, brought applause among union members and near panic on the part of Polish and Soviet authorities. By then, it was clear that Solidarity had become a grave threat to communist rule. Moscow threatened Polish leaders with armed intervention unless Solidarity was shut down. For a time, the real threat of a Soviet military invasion loomed.

Then, on 13 December 1981, the Polish government, now headed by General Wojciech Jaruzelski, imposed martial law and declared Solidarity illegal. Almost 10,000 Solidarity members were detained. Wałesa was among those arrested.

Pope John Paul II and the Catholic Church publicly supported the struggles of Solidarity and its imprisoned principals while clandestinely sending messages of encouragement to Wałesa and others. Wałesa credited the eventual triumph of Solidarity to the pope's intercession.

In April 1982, Solidarity activists who had avoided arrest formed the Solidarity Temporary Coordinating Committee to stage underground union activity. Four years later, in September 1986, Wałesa initiated an open, albeit illegal, Solidarity Committee. The government refused to recognize this committee, and its members were closely watched by the secret police. Nevertheless, Wałesa, who had won the 1983 Nobel Peace Prize, was now a prominent international figure. Silencing him was therefore exceedingly difficult for Polish authorities.

In August 1988, Polish authorities, together with the Catholic Church and the still-illegal Solidarity movement, commenced negotiations concerning the future of Poland. During February-April 1989, a roundtable brought together communists, opposition leaders, Solidarity members, and Catholic Church representatives. The talks brought an end to the government prohibition of Solidarity. In the elections that followed in June 1989, in which 35 percent of the seats were to be decided by election, Solidarity candidates won 161 of 161 seats in the Sejm and 99 of 100 in the Senate. In August 1989, Tadeusz Mazowiecki, one of Solidarity's founders, formed the first noncommunist post-World War II Polish government. After 1989, Solidarity became a traditional political labor party.

Ost, David. Solidarity and the Process of Anti-Politics: Opposition and Reform in Poland since 1968. Philadelphia: Temple University Press, 1990.