Arab nation in the Middle East covering 71,498 square miles, just slightly larger than the U.S. state of North Dakota. The Syrian Arab Republic, with a 1945 population of approximately 3.2 million people, borders on Jordan and Israel to the south, Lebanon and the Mediterranean Sea to the west, Turkey to the north, and Iraq to the east. For much of its history, Syria was dominated by larger powers. It was part of the Ottoman Empire until 1920, and its economy and educational system had left its populace in relative destitution. In 1920, France received a League of Nations mandate over both Syria and neighboring Lebanon. However, French rule there resulted in repeated uprisings—particularly among the Druze. After a tortuous series of negotiations that began in the late 1920s, Syria was granted considerable autonomy in 1936. To fulfill previous agreements, France announced the formation of an independent Syrian republic in September 1941 with Shukri al-Kuwatl as its president. Syria became fully independent on 1 January 1944. Syria took part in the failed Arab war against Israel during 1948-1949. A member of the Arab League, Syria was a vociferous opponent of Israeli statehood. The defeat in the war and disagreement over Syria's potential union with Iraq torpedoed al-Kuwatl's government. There were three coups in 1949, the last one headed by Lieutenant Colonel Adib al-Shishakli, who governed with a heavy hand until 1954. Al-Shishakli was ousted in 1954, and late that year elections were held to determine the makeup of the new government. In the end, a three-party coalition (People's, National, and Baath Parties) emerged with National Party chief Sabri al-Asali as head of the government. In the succeeding years, the Baathists, who combined Arab nationalism with socialist policies, became the most powerful political force in Syria. As such, Syria entered into economic and military agreements with the Soviet Union.

There were three coups in 1949, the last one headed by Lieutenant Colonel Adib al-Shishakli, who governed with a heavy hand until 1954.

In February 1958, Syria and Egypt joined to form the United Arab Republic (UAR). Within a year Egypt's intention to dominate the UAR became obvious, which forced yet another coup against the Syrian government in September 1961. Carried out by a group of military officers, the coup plotters pulled Syria out of the UAR and established the Syrian Arab Republic. In December 1961 elections for a national assembly occurred, and the body chose two conservative People's Party members to lead the new regime. Another coup in late 1962 again toppled the government.

In 1963, a joint Baath-military government came to power. The new government nationalized most industrial and large commercial concerns and engaged in land reforms that redistributed land to the peasants. Meanwhile, Syria continued to cultivate relations with the Soviet bloc. A schism in the Baath Party resulted in more instability, and in 1966 the radical wing of the party staged a coup and installed Yusseff Zayen as prime minister. Nureddin al-Attassi became president. This new regime tightened Syria's ties with the Soviets and Egyptians.

Syria fought yet another war with Israel in June 1967. This time, its defeat included the loss of the Golan Heights to the Israelis. The outcome of the war ultimately brought General Hafez al-Assad to power in 1970. An ardent Baath nationalist, Assad sought to increase ties to other Arab states, de-emphasize Syrian reliance on the Soviet Union, and defeat Israel.

In early 1971, Assad was elected president. He would rule the country until his death in 2000. Over the next several years following his election, he modernized the Syrian Army and engaged in modest economic reforms, while the Baath Party gained even more strength. Befitting his Baathist philosophy, the state played a central role in economic planning and implementation. It must be noted, however, that Assad's tactics could be brutal and that there was little room for dissent or democracy in Syria. Syria was involved in a fourth Arab-Israeli war in October 1973. After initial successes, and although Syrian forces this time fought well, they were nonetheless driven back beyond their original positions. 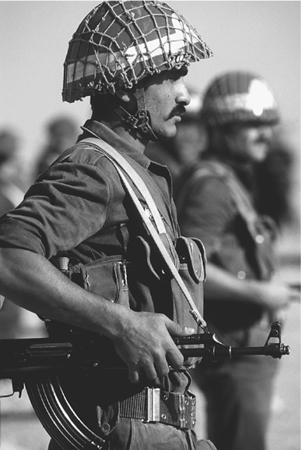 A member of a Syrian honor guard stands at attention during Operation DESERT SHIELD. Despite Syrian animosity toward U.S. ally Israel, Syria joined the United States in the coalition against Iraq during the Persian Gulf War of 1991. (U.S. Department of Defense)

Assad also sent his army into Lebanon in 1976, ostensibly as a peacekeeping force during the civil war there. The troops stayed on, however, Assad siding with the Muslims who were fighting Christian militias. By the mid-1980s, Assad's forces had become the preponderant political and Page 1993  |  Top of Articlemilitary force in Lebanon. Syrian troops were not withdrawn from Lebanon until 2005.

At the same time, the 1980s saw the Assad regime taking harder-line Arab positions and moving closer to the Soviets. Assad's get-tough approach in regional politics included his funding and encouragement of terrorism. Assad, who was always in the end a pragmatist, sought to ameliorate relations with the West as the Soviet Union began to implode in 1990. When Iraq invaded Kuwait in August 1990, Assad was the first Arab leader to denounce the attack. His government also provided 20,000 troops to the international coalition that defeated Iraqi forces in the 1991 Persian Gulf War.

In 1991, Assad's government entered into peace negotiations with Israel, although the process broke down with no firm agreement in January 2000. In June 2000, Assad died unexpectedly after thirty years in office. He was succeeded by his son, Bashar al-Assad, who was carefully groomed as the heir apparent. Allegedly a free-market proponent, the younger Assad attempted some economic and political reforms, but the process has been fraught with setbacks and obstacles. In 1998, 65 percent of all Syrian revenues came from petroleum products.

Seale, Patrick. Assad of Syria: The Struggle for the Middle East. Berkeley: University of California Press, 1988.