Austen is best known as a consummate novelist of manners. The author of six novels, Austen depicted a small slice of English life during the Regency period, a time marked by the Napoleonic Wars, the early growth of the English Empire, and an economic and industrial revolution that was countered by a cultural emphasis on all things proper, elegant, genteel, and truly "English." Austen captured this moment in great detail, focusing narrowly on the lives of the landed gentry in rural England and—more particularly—the little triumphs and defeats faced by the young women attempting to secure their future survival through respectable marriage. In such works as Pride and Prejudice (1813), Emma (1816), and Mansfield Park (1814), Austen employed wit, irony, and shrewd observation to advance the literary status of the women's novel and to address the social and political concerns of nineteenth-century men and women.

The daughter of the Reverend George Austen and Cassandra Leigh Austen, Jane Austen was born December 16, 1775. She was the seventh of eight children and the youngest of two daughters 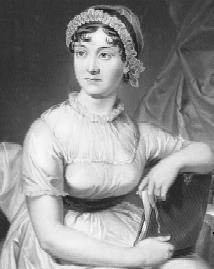 Jane Austen
in the middle-class family, then living at Steventon Rectory in Hampshire, England. As the parson's daughter, Austen mixed frequently and easily with the landed gentry of rural England. Among the Austens's neighbors was Madam Lefroy, wife to a parson and sister to an aristocratic squire fond of books. Lefroy, who wrote and published poetry, took a special interest in Austen's education, and encouraged her intellectual development. At home, Reverend Austen entertained the family by reading literature aloud and guided Austen in choosing books from his large library and local circulating libraries, while James Austen, Austen's eldest brother, directed the family in amateur theatricals. Between 1783 and 1786, Austen received formal schooling, first at a boarding school at Oxford, then at the Abbey School in Reading. Around the age of twelve, Austen began writing children's stories. She stayed at Steventon until 1801, reading, writing, and participating in the Hampshire social rounds of balls, visits, and trips to Bath. Austen never married, but in 1795 fell in love with Thomas Langlois Lefroy, the nephew of her mentor Madam Lefroy. Madam Lefroy, however, disapproved of the match, thinking Thomas would lose his inheritance if he married the penniless daughter of a clergyman, and sent her nephew away. During these last years at Steventon, Austen began several early drafts of her mature works. She wrote her first novel in 1796 and 1797; "First Impressions" was sufficiently Page 334  |  Top of Article polished that her father attempted to publish it, but it was turned down. She would eventually revise it as Pride and Prejudice. Her next attempt was a novel she titled "Susan," and though she was able to sell it to a publisher in 1803, it was never published in its initial form. She eventually revised it further, and the book was published posthumously as Northanger Abbey (1818). Austen's authorial efforts were interrupted by a series of tragedies: in 1804 Madam Lefroy, who had remained her close friend, died in a riding accident, and in 1805 her father died, leaving Austen, her sister, and her mother with no means of support. They became dependent on her brothers, who jointly maintained the women in Bath until 1806, when Frank, a naval officer, invited them to live at his home in Southampton. In 1809, they moved to Chawton Cottage, on her brother Edward's estate in Kent. There, Austen worked on Sense and Sensibility, finally succeeding in getting her first novel published in 1811. As with all her works, Sense and Sensibility was published anonymously, "By a Lady." That year, she also worked on the final version of Pride and Prejudice and began Mansfield Park. She was unusually secretive about her writing for some time, even insisting that the door to the chamber she used for writing not be repaired, so that the squeak of the hinges would alert her to intruders. Sense and Sensibility and Pride and Prejudice both sold out their first printings and went into second editions and Mansfield Park sold out its first printing as well. Now a literary success, Austen began work on Emma in 1814. The Prince Regent (later George IV) invited Austen to meet with him in November 1815, expressing his admiration for her work and asking her to dedicate her next novel to him. She reluctantly agreed, and Emma was released with a dedication to the prince just over a month later. During that year, Austen also began work on Persuasion (1818), the last novel she would complete. She began the novel Sanditon in 1817 but was forced to leave it unfinished due to illness. In May of that year, she moved with her sister Cassandra to Winchester to obtain medical care but died on July 18. The obituary in the Hampshire newspaper contained one of the first public acknowledgements of her authorship.

Austen's novels are peopled with characters drawn from her sphere of life: ladies and gentlemen of the landed gentry. The plots of her novels revolve around the intricacies of courtship and marriage between members of the upper class. Austen's novels consider a narrow scope, using wit and irony to develop and further her plots. In many of her novels, women suffer, at least temporarily, for the joint distinctions of sex and class. Jane and Elizabeth Bennett, in Pride and Prejudice, are nearly prevented from marrying their wealthy suitors because of social codes forbidding it. Elinor and Marianne Dashwood, in Sense and Sensibility, similarly find themselves prohibited from marrying men for lack of adequate resources and social standing to make the connections respectable. As Austen's heroines painfully recognize, being female puts them in a precarious position: the Bennett family's estate will pass into the possession of a male cousin, and the Dashwood sisters and their mother are at the mercy of a half-brother's beneficence after the death of Mr. Dashwood. Mansfield Park and Persuasion are more complex works and have been considered less accessible to readers. The satirical aspect of Mansfield Park is less clear than in other novels; in particular, critics have found the heroine Fanny difficult to sympathize with, and it is not clear if her unusually moralistic thought and behavior is meant as a model to be emulated or one to be avoided. The heroine of Persuasion, Anne Elliot, has been characterized as a departure from Austen's usual characters. Persuasion's tone is more subdued and poetic than Austen's earlier work, possibly a reflection of the author's increasing interest in Romanticism and an indication of her greater attention to the pain inflicted by the social mores she examined in her earlier works.

During the first several decades after Austen published her novels, her work received little commentary. After the 1870 publication of her nephew's Memoir of Jane Austen, however, interest in her works increased. James Austen-Leigh's Memoir inaugurated a worshipful, nostalgic brand of Austen criticism. Adoring critics praised Austen's characteristic authorial traits, especially the elegance of her prose, but offered no thorough critical analysis of her works. Subsequent studies of Austen therefore reacted strongly to counter this tendency, emphasizing the technical flaws in the novels and dismissing what scholars considered the narrow, trivial world about which she Page 335  |  Top of Article wrote. A pronounced move toward a more balanced, objective mode of criticism came in 1939 with Mary Lascelles's focused attention on the technical and thematic aspects of Austen's work. With the advent of feminist criticism, critics again reexamined Austen's novels. Margaret Kirkham portrays Austen as a proto-feminist who purposefully argued in her novels against the social, political, and economic limitations placed on women by patriarchal English society. Susan Fraiman differs in her assessment of Austen's treatment of women's issues. She notes that although Austen's heroines are often witty and independent, offering an observer's perspective on women's inferior position in society, by the end of the works the heroines are reincorporated back into patriarchal society, no longer free agents and independent thinkers but wives subsumed by their husbands' households. Political and feminist scholarship on Austen's novels was further invigorated by the rise of postcolonial criticism. Moira Ferguson contends that Austen's novels offer a reformist critique of imperialism and finds a close link between the reformist impulse and women's status in English society.