In the last twenty-five years of artist Romare Bearden's life, collage was his principle medium. Through that medium, relying on memory, he recorded the rites of African-American life in all their historical and ceremonial complexity. In so doing he joined the ranks of Picasso, Matisse, and Miró, artists who transformed collage into a quintessentially twentieth-century language. Working with a medium that by its very nature is fragmented and heterogeneous, where reality and illusion hang in a precarious balance, Bearden, as his friend the writer Ralph Ellison once noted in Romare Bearden: Paintings and Projections (1968), captures the sharp breaks, leaps in consciousness, distortions, paradoxes, reversals, telescoping of time and surreal blending of styles, values, hopes, and dreams that characterize much of African American history.

Fred Howard Romare Bearden was a child of privilege. He was born in Charlotte, North Carolina, in the home of his great-grandparents, Rosa and Henry Kennedy. Former slaves, the Kennedys had become prosperous landowners, and Bearden spent the early years of his life in a spacious Victorian-style frame house surrounded by doting great-grandparents and grandparents. In spite of their comfortable life, however, Bearden's college-educated parents, Bessye and Howard, were dissatisfied with the limitations of the Jim Crow South. On the eve of World War I, like hundreds of thousands of black Americans throughout the South, they migrated north.

After traveling to Canada, Bessye and Howard finally settled in Harlem. Harlem, in the years following World 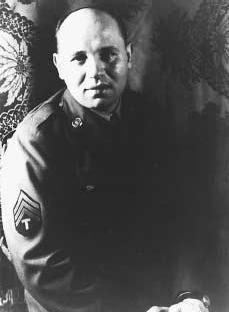 Romare Bearden (1912–1988). The artist Bearden expressed in his celebrated collage and photomontage compositions the fullness of his own experience of black America, from boyhood summers spent in rural North Carolina, to memories of his grandmother's boardinghouse near the steel mills of Pittsburgh, to the spirited Harlem of his adolescence and early adulthood, then in its heyday as a black cultural and intellectual mecca. THE ESTATE OF CARL VAN VECHTEN. REPRODUCED BY PERMISSION.

War I, was the black cultural capital of the world, the home of the New Negro movement, the site of the Harlem Renaissance. A flowering of poetry, painting, and music that marked the African American's first efforts to define himself as a distinctive cultural entity within the larger American culture, the Harlem Renaissance proved to be a rich crucible for Bearden.

Bessye, Bearden's beautiful and dynamic mother who was a New York editor for the Chicago Defender and a political organizer, was at the center of this cultural activity. Her Harlem apartments were always filled with writers and intellectuals such as W. E. B. Du Bois, Paul Robeson, Langston Hughes, and Zora Neale Hurston, as well as painters Aaron Douglas and Charles Alston. Musicians, too, were part of Bearden's circle, and young Romy, as he was called, was surrounded by such exciting jazz musicians and composers as Fats Waller, Andy Razaf, and Duke Ellington. Together, Bessye and Howard, who worked for the Department of Health, provided their only child with a remarkable upbringing.

During the summers Bearden often visited his great-grandparents and grandparents in Mecklenberg, New York, a place that became a veritable paradise in his mind. During his high school years he lived in Pittsburgh with his maternal grandmother, Carrie Banks, who ran a boardinghouse for steelworkers. Like Charlotte and Harlem, Pittsburgh became part of a rich inventory of images for Bearden's mature art.

Bearden came of age as an artist during the depression. While in high school, he met the successful black cartoonist E. Simms Campbell. Campbell's success inspired Bearden to try his hand at cartooning. From 1931 to 1935 he did editorial cartoons for the Baltimore Afro-American and drawings for Collier's and The Saturday Evening Post. After short stays at Lincoln University and Boston University, he enrolled at New York University, where in 1935 he received a B.S. in education. He continued cartooning at NYU, contributing to the university's humor magazine, The Medley.

After he graduated, Bearden became interested in inserting a social message into his cartoons, which led him, as he said, "to the works of Daumier, Forain, and Käthe Kollwitz, to the Art Students League and to George Grosz." Grosz, a German satirist whose visual commentary on post–World War I society was unforgiving, instilled in Bearden the lifelong habit of studying the artists of the past even as he was trying to make contemporary social commentary. Bearden's stay at the Art Students League was his only formal art school training.

Formal training, however, was amply augmented for Bearden by the Harlem art scene of the 1930s and 1940s. In spite of the depression, Harlem boasted a thriving community of visual artists. Many, supported by the New Deal's federally funded Works Project Administration (WPA), worked on public art projects, taught, or worked on WPA easel projects. They were supported by a network of exhibition spaces and art centers: the federally supported art center at West 125th Street, sculptor Augusta Savage's art garage, Ad Bates's exhibiting space at 306 West 141st Street, local libraries, the YMCA, and upscale living rooms and salons. Although Bearden did not qualify for the WPA because his well-to-do parents supported him, he was active nonetheless in artistic activities uptown. He was one of the artists who organized uptown artists into the Harlem Artists Guild, and he wrote articles for Opportunity, the magazine of the Urban League, on black American art and social issues.

More important, Bearden and his artist friends—Norman Lewis, Roy DeCarava, and Ernest Crichlow—Page 228  |  Top of Article were devotees of jazz. They regularly made the rounds of nightclubs and cabarets where they heard firsthand the compositionally complex, innovative music. Though it was many years before Bearden was able to recognize the aesthetic importance of jazz to his painting—inspired by his mentor, Stuart Davis—the music became as important to him as the painting of the masters he studied with George Grosz.

During this time, 1937 to 1940, Bearden produced his first paintings, gouaches on brown paper, eighteen of which were exhibited along with some drawings at his first solo show held at Ad Bates's place on West 141st Street. Scenes of black life in Charlotte and on the streets of Pittsburgh and Harlem, these early paintings, with their terracotta colors, bulky figures, and narrative, almost illustrational quality, were painted in the then fashionable social realist style.

Bearden's uptown art community disintegrated with the coming of World War II and the dismantling of the WPA. Bearden enlisted in the army, continued to exhibit, and came to the attention of Caresse Crosby, the flamboyant founder and publisher with her husband of Black Sun Press. Crosby exhibited Bearden's works at the G Place Gallery in Washington and introduced him to gallery dealer Samuel M. Kootz. Kootz invited Bearden to exhibit, and from 1945 until 1948 Bearden showed there along with such other leading avant-garde painters as Robert Motherwell, Adolph Gottlieb, William Baziotes, Carl Holty, and Byron Browne. During this period Bearden painted oils filled with abstract figures. His works were largely derived from epic literary sources—the Bible, Rabelais, Homer, García Lorca. The style, boldly drawn contours filled with vibrant stained-glass color, was derivative as well, reminiscent of analytical cubism.

During his time at the Kootz gallery, Bearden grew intellectually restless. He found the direction of his colleagues—who came to be known as abstract expressionists—unsatisfying, and he left the country in 1950 to study in Paris on the GI bill. Though he enrolled at the Sorbonne, Bearden spent most of his time enjoying the city. When he returned in 1951, he found that he had lost interest in painting and took up songwriting. Without painting, however, he was disconnected. He had a nervous breakdown and recovered with the help of Nanette Rohan, whom he married in 1954.

With Bearden's recovery came a return to painting. To spur his return, he systematically copied the old masters, actually making large photostatic copies and tracing them. Starting with Duccio and Masaccio, he worked his way into the present, tracing Vermeer, Rembrandt, Delacroix, Matisse, and Picasso. Bearden's copying taught him 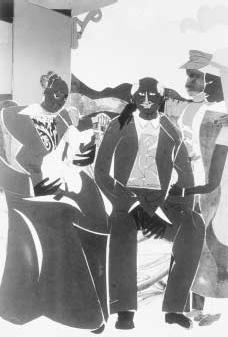 The Family (1988) by Romare Bearden. Family life was a favorite theme of Bearden's, and a number of his works bear the title The Family. The work pictured here was completed in the last year of the artist's life. THE ESTATE OF ROMARE BEARDEN. REPRODUCED BY PERMISSION.

well, and with Carl Holty he wrote a book on space, color, and composition entitled The Painter's Mind: A Study of the Relations of Structure and Space in Painting (1969). Once he had relearned painting, Bearden began to paint large abstract expressionist oils with mythopoeic titles such as Blue Is the Smoke of War, White the Bones of Men (1960).

Bearden's most noteworthy work did not come until he was over fifty years old. Galvanized by the civil rights movement, Bearden, as he had done in the 1930s, organized a group of black artists that took the name Spiral. The group wanted to do something to celebrate the movement, and Bearden thought that perhaps a group work, a collage, might be a vehicle. The group, however, was not interested, but he found himself engaged by the medium. As Bearden worked on these collages, allowing images of Charlotte, Pittsburgh, and Harlem to flood his memory,Page 229  |  Top of Article he captured the turbulence of the time with spatial distortions, abrupt juxtapositions, and vivid imagery.

Bearden's collages made use of a visual language seldom seen in American painting. His collages were populated by conjure women, trains, guitar players, birds, masked figures, winged creatures, and intense ritualistic activities: baptism, women bathing, families eating together at their dinner tables, funerals, parades, nightclub scenes. His representative works contain scenes of enduring ceremonies underscoring the beauty and densely complex cultural lineage of African-American life. Notable works include Watching the Good Trains Go By (1964); At Connie's Inn (1974), one of his many collages on the theme of jazz; Maudell Sleet's Magic Garden (1978) from his autobiographical series; Calypso's Sacred Grove (1977) from his series based on Homer's Odyssey; and lushly colored, late works such as In a Green Shade (1984). Ralph Ellison (1968) referred to Bearden's images as "abiding rituals and ceremonies of affirmation." Bearden invented his own phrase—the "Prevalence of Ritual"—to underscore the continuity of a culture's ceremonies, marking the traditions and values that connect one generation to another.

In his earliest works Bearden painted genre scenes, but in his mature work he pierced the skin of those scenes to explore the interior lives of black people. His first collages were photomontages, that is, photographic blow-ups of collages. After a year he abandoned that technique and, as his collages matured, began to use color more sensuously, creating lush landscapes with layers upon layers of cut paper, photographs, and paint. By the time of his death in 1988, Bearden had won virtually every prize and accolade imaginable, including the Medal of Honor, countless honorary doctorates, cover stories in the leading art magazines, and several retrospectives of his work, including one at the Museum of Modern Art in 1971.

Bearden, Romare. The Painter's Mind: A Study of the Relations of Structure and Space in Painting. New York: Crown, 1969.