Nationalist leader Malcolm X, born Malcolm Little and also known by his religious name, El-Hajj Malik El-Shabbazz, was the national representative of Elijah Muhammad's Nation of Islam, a prominent black nationalist, and the founder of the Organization of Afro-American Unity. He was born in Omaha, Nebraska. His father, J. Early Little, was a Georgia-born Baptist preacher and an organizer for Marcus Garvey's Universal Negro Improvement Association. His mother, M. Louise Norton, also a Garveyite, was from Grenada. After J. Early Little was murdered, Malcolm's mother broke under the emotional and economic strain, and the children became wards of the state. Malcolm's delinquent behavior landed him in a detention home in Mason, Michigan.

Malcolm journeyed to Boston and then to New York, where, as "Detroit Red," he became involved in a life of crime—numbers, peddling dope, con games of many kinds, and thievery of all sorts, including armed robbery. A few months before his twenty-first birthday, Malcolm was sentenced to a Massachusetts prison for burglary. While he was in prison, his life was transformed when he discovered, through the influence of an inmate, the liberating value of education and, through his family, the empowering religious/cultural message of Elijah Muhammad's Nation of Islam. Both gave him what he did not have: self-respect as a black person. 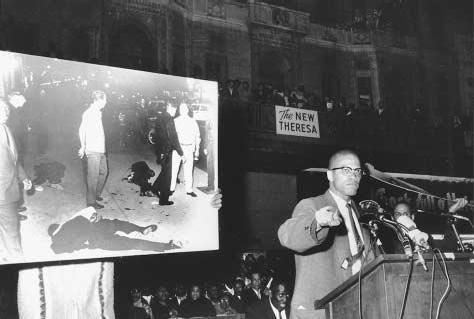 Malcolm X addressing the crowd at a rally, 1963. A fiery orator and controversial black nationalist, Malcolm X was assassinated in 1965. In the decades since, many commentators have begun to reevaluate the extent of his vast influence on the political and social thinking of African Americans. UPI/CORBIS-BETTMANN. REPRODUCED BY PERMISSION.

Malcolm was released from prison in 1952, but not before he had honed his reading and debating skills. He soon became a minister in the Nation of Islam and its most effective recruiter and apologist, speaking against black self-hate and on behalf of black self-esteem. In June 1954 Elijah Muhammad appointed him minister of Temple Number 7 in Harlem. In the temple and from the platform on street corner rallies, Malcolm told Harlemites, "We are black first and everything else second." Initially his black nationalist message was unpopular in the African-American community. The media, both white and black, portrayed him as a teacher of hate and a promoter of violence. It was an age of integration, and love and nonviolence were advocated as the only way to achieve it.

Malcolm did not share the optimism of the civil rights movement and found himself speaking to unsympathetic audiences. "If you are afraid to tell truth," he told his audience, "why, you don't deserve freedom." Malcolm relished the odds against him; he saw his task as waking up "dead Negroes" by revealing the truth about America and about themselves.

The enormity of this challenge motivated Malcolm to attack the philosophy of the Rev. Dr. Martin Luther King Jr. and the civil rights movement head-on. He rejected integration: "An integrated cup of coffee is insufficient pay for 400 years of slave labor." He denounced nonviolence as "the philosophy of a fool": "There is no philosophy more befitting to the white man's tactics for keeping his foot on the black man's neck." He ridiculed King's 1963 "I Have a Dream" speech: "While King was having a dream, the rest of us Negroes are having a nightmare." He also rejected King's command to love the enemy: "It is not possible to love a man whose chief purpose in life is to humiliate you and still be considered a normal human being." To blacks who accused Malcolm of teaching hate, he retorted: "It is the man who has made a slave out of you who is teaching hate."

As long as Malcolm stayed in the Black Muslim movement, he was not free to speak his own mind. He had to represent the "Messenger," Elijah Muhammad, who was the sole and absolute authority in the Nation of Islam. When Malcolm disobeyed Muhammad in December 1963Page 1365  |  Top of Article and described President John F. Kennedy's assassination as an instance of "chickens coming home to roost," Muhammad rebuked him and used the incident as an opportunity to silence his star pupil. Malcolm realized that more was involved in his silence than what he had said about the assassination. Jealousy and envy in Muhammad's family circle were the primary reasons for his silence and why it would never be lifted.

Malcolm reluctantly declared his independence in March 1964. His break with the Black Muslims represented another important turning point in his life. No longer bound by Muhammad's religious strictures, he was free to develop his own philosophy of the black freedom struggle.

Malcolm had already begun to show independent thinking in his "Message to the Grass Roots" speech, given in Detroit three weeks before his silence. In that speech he endorsed black nationalism as his political philosophy, thereby separating himself not only from the civil rights movement but, more importantly, from Muhammad, who had defined the Nation as strictly religious and apolitical. Malcolm contrasted "the black revolution" with "the Negro revolution." The black revolution, he said, is international in scope, and it is "bloody" and "hostile" and "knows no compromise." But the so-called "Negro revolution," the civil rights movement, was not even a revolution, according to Malcolm, who mocked it: "The only revolution in which the goal is loving your enemy is the Negro revolution. It's the only revolution in which the goal is a desegregated lunch counter, a desegregated theater, a desegregated public park, a desegregated public toilet; you can sit down next to white folks on the toilet."

After his break Malcolm developed his cultural and political philosophy of black nationalism in "The Ballot or the Bullet." Before audiences in New York, Cleveland, and Detroit, he urged blacks to acquire their constitutional right to vote and move toward King and the civil rights movement. Later he became more explicit: "Dr. King wants the same thing I want—freedom." Malcolm went to Selma, Alabama, while King was in jail in support of King's efforts to secure voting rights. Malcolm wanted to join the civil rights movement in order to expand it into a human rights movement, thereby internationalizing the black freedom struggle, making it more radical and more militant.

During his period of independence, which lasted for approximately one year before he was assassinated, nothing influenced Malcolm more than his travel abroad. His pilgrimage to Mecca transformed his theology. Malcolm became a Sunni Muslim, acquired the religious name El-Hajj Malik El-Shabbazz, and concluded that "Orthodox Islam" was incompatible with the racist teachings of Elijah 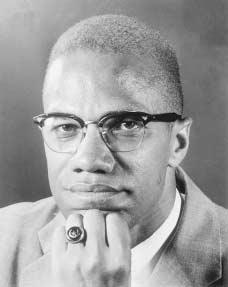 Muhammad. The sight of "people of all races, colors, from all over the world coming together as one" had a profound effect upon him. "Brotherhood," and not racism, was seen as the essence of Islam.

Malcolm's experiences in Africa also transformed his political philosophy. He discovered the limitations of skin-nationalism, since he met whites who were creative participants in liberation struggles in African countries. In his travels abroad he focused on explaining the black struggle for justice in the United States and linking it with other liberation struggles throughout the world. "Our problem is your problem," he told African heads of state: "It is notPage 1366  |  Top of Article a Negro problem, nor an American problem. This is a world problem; a problem of humanity. It is not a problem of civil rights but a problem of human rights."

When Malcolm returned to the United States, he told blacks: "You can't understand what is going on in Mississippi, if you don't know what is going on in the Congo. They are both the same. The same interests are at stake." He founded the Organization of Afro-American Unity, patterned after the Organization of African Unity, to implement his ideas. He was hopeful of influencing African leaders "to recommend an immediate investigation into our problem by the United Nations Commission on Human Rights."

Malcolm X was not successful. On February 21, 1965, he was shot down by assassins as he spoke at the Audubon Ballroom in Harlem. He was thirty-nine years old.

No one made a greater impact upon the cultural consciousness of the African-American community during the second half of the twentieth century than Malcolm X. More than anyone else, he revolutionized the black mind, transforming some self-effacing colored people into proud blacks and self-confident African Americans. In the wake of the civil rights movement, and to some extent as a consequence of Malcolm X's appeal, some preachers and religious scholars created a black theology and proclaimed God as liberator and Jesus Christ as black. College students demanded and got courses and departments in black studies. Artists created a new black aesthetic and proclaimed, "Black is beautiful."

No area of the African-American community escaped Malcolm's influence. Some mainstream black leaders who first dismissed him as a rabble-rouser embraced his cultural philosophy following his death. Malcolm's most far-reaching influence, however, was among the masses of African Americans in the ghettos of American cities. Malcolm loved black people deeply and taught them much about themselves. Before Malcolm, many blacks did not want to have anything to do with Africa. But he reminded them that "you can't hate the roots of the tree and not hate the tree; you can't hate your origin and not end up hating yourself; you can't hate Africa and not hate yourself."

Malcolm X was a cultural revolutionary. Poet Maya Angelou called him a "charismatic speaker who could play an audience as great musicians play instruments." Disciple Peter Bailey said he was a "master teacher." Writer Alfred Duckett called him "our sage and our saint." In his eulogy, actor Ossie Davis bestowed upon Malcolm the title "our shining black prince." Malcolm can be best understood as a cultural prophet of blackness. African Americans who are proud to be black should thank Malcolm X. Few have played as central a role as he in making it possible for African Americans to claim their African heritage.

The meaning of Malcolm X grows deeper as people of color continue to study his life and thought. The recent "gift" of a trove of his speeches, photographs, letters, and journals to the New York Public Library's Schomburg Center for Research in Black Culture in Harlem (2002) promises to yield new insights into his growth and development as a thinker and leader. These important documents will eventually be made available for scholarly assessment.

Earlier in 1999, a previously unknown collection of Malcolm X's letters, school notebooks, and photographs was deposited at Emory University's Woodruff Library in Atlanta, Georgia. They date from 1941 to 1955. They show Malcolm as an articulate and eloquent writer, even as a teenager, and seriously interested in writing a book. This contrasts sharply with his portrayal of himself as ignorant in his Autobiography.

With the passage of time, Malcolm's image has soared. In 1965 he was widely rejected as a fiery demagogue, but today his image adorns a U.S. postage stamp. Indeed, he is regarded by many as an important African-American leader alongside of Martin Luther King Jr.