Henry Tanner was a painter and illustrator. His father, Benjamin Tucker Tanner (1835–1923) and his mother, Sarah Elizabeth Miller (1840–1914), lived in Pittsburgh at the time of Henry's birth. They gave their son the middle name Ossawa, after the Kansas town of Osawatomie, where white abolitionist John Brown had started an antislavery campaign in 1856. After entering the ministry in 1863, Tanner's father rose to the rank of bishop in the African Methodist Episcopal Church in 1888. The Reverend Tanner relocated the family to Philadelphia in 1868 so that he could serve as editor of the Christian Recorder. Tanner attended Lombard Street School for Colored Students in 1868. The next year he enrolled at the Robert Vaux Consolidated School for Colored Students, then the only secondary school for black students in Philadelphia, which was renamed Robert Vaux Grammar School the year before Tanner graduated as valedictorian in 1877.

Tanner began painting when he was thirteen years old, and although his parents supported his early efforts, he did not receive formal training until 1880, studying with Thomas Eakins at the Pennsylvania Academy of the Fine Arts until 1885. During his academy years and through 1890, Tanner was primarily a painter of seascapes, landscapes, and animal life. Many of his paintings engaged a particular technical challenge in representing natural phenomena such as waves breaking on rocks in stormy seas (Seascape-Jetty, 1876–1879), rippling autumn foliage (Fauna, 1878–1879), or the light in a lion's mane at the Philadelphia Zoo (Lion Licking Its Paw, 1886). While his work in each genre was influenced by numerous lesser-known local artists, Tanner was developing his own style and becoming skilled at controlling effects of light, giving objects form through a subdued color scheme and a subtle sense of tonality, and creating decorative effects with tiny flecks of color. Tanner strategically organized space by surrounding central figures with vast areas of opaque color—representing grass or sky, for example—and using the emptiness to draw the viewer's attention to the locus of dramatic activity.

Although Tanner met with some critical success as a landscape painter during his academy years, he was unable to support himself by painting and worked for a flour business owned by friends of his family. In 1889 he relocated to Atlanta, where he taught at Clark University and worked for a year as a photographer. There was a lull in Tanner's painting from 1889 to 1890, but he used some photographs from this year, taken on a trip to North Carolina, as studies for paintings such as his well-known work The Banjo Lesson (1893).

In Atlanta, Tanner met Joseph Crane Hartzell, a white Methodist Episcopal bishop, and his wife. They became his patrons, sponsoring the first exhibition of his work in Cincinnati in 1890. They supported Tanner when he traveled to Europe in 1891 and set up a studio in Paris, where he began studying with Jean-Joseph Benjamin Constant and Jean-Paul Laurens. Tanner returned to Philadelphia in 1893, although he found the racial restrictions onerous and soon returned to Paris. In 1899 he married Jessie Macauley Olssen (1873–1925), a white American of Swedish descent who was living abroad in Paris. The two remained happily married and lived in France for most of their lives, 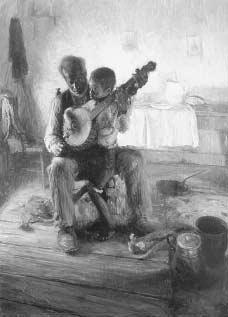 The Banjo Lesson (Henry Ossawa Tanner, 1893). The first African-American artist to receive national and international recognition for his work, Tanner turned to depictions of African-American life in his paintings of the 1890s. © HAMPTON UNIVERSITY MUSEUM, VIRGINIA. REPRODUCED BY PERMISSION.

except for the years Tanner spent at an artists' colony in Mount Kisco, New York, from 1901 to 1904. Tanner's Paris studio became a hub of activity for visiting African-American artists and other visitors from abroad in the early part of twentieth century.

During the 1890s Tanner's work shifted from landscape painting to genre scenes depicting black life in America. The change has been attributed to Tanner's 1893 participation as a speaker in the Columbian Exposition's Congress on Africa, where he asserted the achievements of African-American artists and listened to speakers give an overview of post-Emancipation black leadership across the nation. With his thoughts focused on issues of black identity and productivity, Tanner began depicting genre scenes of African-American life. Though he painted relatively few genre scenes, some of them, such as The Banjo Lesson and The Thankful Poor (1894), are among his best-known paintings. The Banjo Lesson depicts one of the acclaimed themes in American genre painting, an older musician teaching his art to a young boy. The Thankful Poor also features an old man and a boy to show how the black family passed on moral and spiritual lessons to its children.

Tanner's style during his genre period had several influences. In 1889 Tanner spent time in the Brittany region of France, involved in the impressionist and postimpressionist movements, particularly those in the circle of Gauguin. Whereas some critics have noted that Tanner borrowed the impressionists' techniques and was influenced by their use of color and spatial organization to communicate mood, the overall character of his work was shaped by academic romantic realism.

Tanner's illustrations appeared in American journals such as Harper's Young People and Our Continent, as well as in exhibition catalogs at the Pennsylvania Academy of the Fine Arts. His work was seen in exhibitions at the academy in 1888, 1889, 1898, and 1906 and was frequently shown at the prestigious Salon de la Société des Artistes Français in Paris during the period 1894 to 1914.

In the later stages of his career, Tanner was most active as a religious painter, and though these works were based on biblical stories and did not directly address issues of black life, they were continually concerned with broad themes of social justice in the earthly world, using the stories as metaphors for more contemporary issues such as slavery and emancipation in America. An early representation of Daniel in the Lions' Den (1896), one of his two known paintings of this well-known religious theme, was exhibited at the salon, where it received honorable mention. In 1897, shortly after he painted Daniel in the Lions' Den, Tanner traveled to the Middle East to observe the people and geography of the ancient lands and to enhance the historical accuracy of his paintings with biblical themes. Among the most celebrated religious compositions was The Raising of Lazarus (1896), now located at the Musée d'Orsay in Paris. Other paintings on sacred subjects included Nicodemus Visiting Jesus (1899), Flight into Egypt (1899), Mary (1900), Return of the Holy Women (1904), Christ at the Home of Mary and Martha (1905), Two Disciples at the Tomb (1906), The Holy Family (1909–1910), Christ Learning to Read (1910), The Disciples on the Sea of Galilee (1910), and The Good Shepherd (1922).

Tanner's religious work went through multiple stylistic phases and had diverse influences, including Velázquez's portraiture, El Greco's elongated figures, David's scale of historical paintings, and Georges Rouault's use of color in contemporary religious paintings. The style of his paintings after 1920 was marked by an overall conservatism. He remained uninfluenced by contemporary developments. Despite some brilliant coloristic effects, the overall impact of his religious compositions, with theirPage 2163  |  Top of Article limited range of tonality and virtually absent source of light, is a brooding, somber, and contemplative mood.

Tanner exhibited widely in the United States after 1900, with paintings appearing at the Pan-American Exposition (Buffalo, New York) in 1901, the Louisiana Purchase Exposition in 1904, the St. Louis Exposition in 1904, the Carnegie Institute Annual Exhibition in Pittsburgh in 1906, the Anglo-American Art Exhibition (London) in 1914, the Panama-Pacific Exposition (San Francisco) in 1915, the Los Angeles County Museum in 1920, and the Grand Central Art Galleries in New York in 1920. Since 1968 Tanner's works have been shown in major United States exhibitions celebrating the accomplishments of American artists of African descent.

Tanner served his country during World War I as a lieutenant in the American Red Cross in the Farm Service Bureau. In 1918 he worked in the Bureau of Publicity as resident artist. Although his academic style was increasingly out of fashion, in his later years he was given many honors. He received the coveted Légion d'Honneur (Legion of Honor) from the French government in 1923. Tanner's son Jesse graduated from Cambridge University in 1924 and became an engineer upon his return to France. In 1927 Tanner became the first African American elected to full membership in the National Academy of Design. He continued to work as a painter until his death in Paris.