A wayang kulit performance features puppets made from parchment-like buffalo skin and horn. Such performances belong to the cultural tradition of various ethnic groups in the Indonesian archipelago. The puppeteer sits behind the cotton cloth screen, which is fixed in a wooden frame with a banana-trunk base; he or she manipulates the skillfully painted puppets that cast their shadows onto the screen in the light of an oil lamp. Most famous and sophisticated are those of the Central-Javanese courts and those on Bali, dating back to the period of the ancient Hindu-Javanese kingdoms (tenth– sixteenth centuries). They dramatize stories from the Old Javanese adaptations of the ancient Indian epics Ramayana and Mahabharata and are staged mostly in a ceremonial context (especially during life-cycle rituals). In Bali, the audience sits in front of the screen; in Java, only the women watch from the front, while the men enjoy the colorful puppets and the large gamelan (Indonesian percussion instruments) orchestra directed by the puppeteer from behind. The vast aesthetic and spiritual knowledge, obtained in years of study, makes the puppeteer a highly revered member of traditional society. His advice and comments on local affairs, which are put into the mouths of the clown-servant puppets, are enjoyed as well as feared. 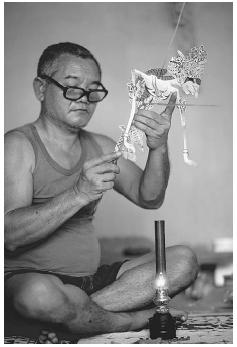