Kathakali is a dance-drama form from the state of Kerala. It is the culmination of a long process of evolution and assimilation of different theatrical forms and of both the highly stylized form of theater called Koodiyattam and the martial art form called Kalaripayattu. The most supernatural and mythological aspects concerning the lives and affairs of celestial beings, deities, demons, and sages form the content of Kathakali. Though Koodiyattam can be traced back to the ninth and tenth centuries, contemporary Kathakali emerged as an independent, highly formalistic and elaborate dance-drama form only in the seventeenth century. In Kathakali the actors do not speak. The libretto is sung in Manipravalam, a type of Malayalam enriched with a large number of Sanskrit words. 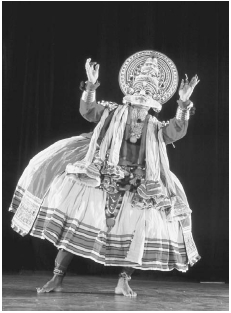 Kathakali Performance, Kerala Dance Form. Contemporary Kathakali dancer, Kerala. Besides Bharata Natyam (the oldest form of classical dance in India), seven regional forms exist, including Kathakali on the southwest coast. Each has its own technique, style of music and costume. ADITYA ARYA

Kathakali has an elaborately defined code of body kinetics, combined with eloquent but amazingly elaborate hand gestures, popularly called mudrās. During the monsoon months, the actors are massaged with oil to make their bodies more pliable. Kathakali training is strenuous and lasts for nearly ten years, after which time an actor is given a small role to play. It is further enhanced by stylized makeup and costumes to provide the appropriate symbolic nuances that typify Kathakali performance.

A striking feature of Kathakali is its body kinetics accompanied by movements of the facial muscles. No other dance form uses the movements of the eyebrows, the eyeballs and the lower eyelids, as described in the Nātya Shāstra, as does Kathakali. The face becomes a playground of various conflicting bhavas, or emotions.

The principal characters are well-known types, and the elaborate makeup used to identify them is Kathakali's most famous feature. For the sattvika (noble) characters, the make up is paccha, a green color. The jaw-bone is exaggerated by white paste. Along the arc of this white paste, paper cut-outs of a false chin and jaw are adhered, enlarging the dimensions of the face. Such dramatic makeup and costuming transform the actor from human proportions to superhuman stature.

For rajasik (violent) characters, like the epic Ramayana's demon-villain Ravana, the green makeup is broken by red patches. An oval red-and-white design is added to the nose and the upper cheek. His upturned moustache is called katti. Three types of red, black, and white thadis (beards) typify antiheroes, villains, and demons: red for characters like Dussashana; black for the tamasik (dark) characters like aborigines and forest dwellers; and white for divine allies like Hanuman. Mudis, the headgear for the sattvika characters, are large, but the demons wear even larger crowns. Women, Brahmans, and sages fall into minukku types, whose makeup is only one basic pink color. Except for those of the minukku types, all the costumes are elaborate.

In nritta, the pure dance, kalasams (dance units) alternate with the nritya, the expressional aspect, enhancing the natya, or drama. Characters appear from behind a curtain held by two stagehands. The music that accompanies Kathakali is known as the Sopanam style of music. There are four musicians; two vocalists, who also play cymbals; and two drummers, one playing a maddalam, held horizontally, and the other playing a chenda, a conical instrument held vertically. They stand behind the actors. Acting follows the sung libretto, elaborated upon and often improvised; the singing then stops, and only cymbals and drums are played.

The repertoire consists of purappadu, a pure dance piece that introduces the characters without mime. Then the play begins. The female roles are traditionally played by men. Women have, however, begun to study Kathakali and to play female roles. Kalyan Sougandhikam, Bali Vijayam, Lavanasuravadham, Nala Charitam, and Sita Swayamvaram are among the well-known plays.