Thumbnail description
Cryptobranchids are large aquatic salamanders with dorsoventrally flattened bodies, short limbs, and laterally compressed tails; metamorphosis is incomplete; lateral folds present on the body and limbs are highly vascularized; eyelids are absent, and the eyes are small; larvae may maintain gills from 18 months to more than three years 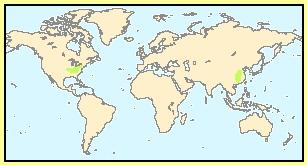 Cryptobranchids are believed to be derived from hynobiid-like amphibians by the retention of larval characters into adulthood. Morphologic features (fusion of the tibialis muscles, which move the lower leg, as well as the first hypobranchials with the first ceratobranchials, both found in the hyoid apparatus) and molecular studies (analysis of ribosomal RNA sequences) support a group with a single line of phylogeny (lineage) comprising the families Hynobiidae and Cryptobranchidae within the suborder Cryptobranchoidea. The fossil record of cryptobranchid salamanders begins with Cryptobranchus saskatchewanensis from the Upper Paleocene to the Lower Eocene, C. matthewi from the middle Miocene to the Miocene-Pliocene boundary, and C. alleganiensis from the Pleistocene and recent sites in North America. It includes C. scheuchzeri from the Middle Oligocene to the Upper Pliocene in Europe and Andrias japonicus from Pleistocene sites in Asia. C. guiday from the Pleistocene of Kansas probably is referable to C. alleganiensis.

It is impossible to compare many parameters between fossil and extant forms. For example, adult C. alleganiensis have a single hemoglobin (iron-containing pigment of red blood cells), and adult Andrias davidianus possess two different types of hemoglobin, yet nothing is known about the hemoglobin of fossil cryptobranchids. There are three extant species: the Chinese giant salamander, Andrias davidianus Blanchard, 1871, "Tchong Pa from the Fowho River" (Jiangyou County, Sichuan Province, China); the Japanese giant salamander, Andrias japonicus Temminck, 1837, mountains of Suzuka, Omi Province, en route from Tsuchiyama to Sukanoshita, Japan (lectotype, Hoogmoed, 1978); and the hellbender, Cryptobranchus alleganiensis Daudin, 1803, Allegheny Mountains, Virginia, United States. Two subspecies of hellbenders are recognized. No subfamilies are recognized. Cryptobranchids have a very low level of genetic variation, but hellbenders may have substantial variation of mitochondrial DNA.

Hellbenders usually maintain a single pair of gill openings, whereas the Asiatic giant salamanders lose these openings during metamorphosis. The Japanese giant salamanders are distinguished from the Chinese giant salamander by having large tubercles on the head and throat that are singular and scattered irregularly. The tubercles of the Chinese relative are smaller and typically paired. Cryptobranchids vary widely in color and pattern. The dorsum is slate, brown, greenish brown, yellowish brown, orange-red, or, rarely, albino. During the breeding season some mature hellbenders from Ozark streams change from greenish brown or yellowish brown during the day to orange at night. 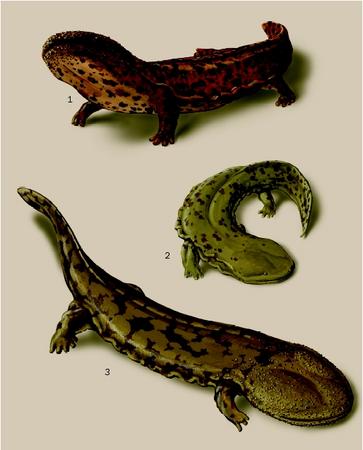 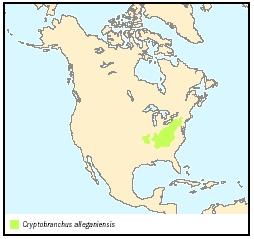 The Chinese giant salamander ranges from Jiangsu to Quinghai south to Guanxi, Guangdong, and Sichuan. They are found in montane streams, usually below 4,888 ft (1,490m), including the middle and lower tributaries of the Huang He, Yangtze, and Zhu Jiang rivers. Giant salamanders from Taiwan may be introduced. The Japanese giant salamander is found in the prefecture of Oita on Kyushu Island and from the southwestern region of Honshu Island northeast to the prefecture of Gifu, Shikoku, typically below 2,264 ft (690 m). Hellbenders occur in streams, usually below 2,641 ft (750 m), from the Susquehanna and Allegheny rivers of southern New York south to the Tennessee river drainage of northeastern Mississippi and west to the Springfield and Salem plateau streams of the Missouri and Arkansas Ozark highlands.

All species are typically nocturnal and exhibit positive correlations with stream flow (rheotaxis) and touch (thigmotaxis). They become less photophobic during the breeding season, and their positive thigmotaxis may be related to the amount of light present. Daily activity patterns of hellbenders are similar before and during the breeding season, but individual activity may vary with gender, season, and water temperature. When hellbenders are stressed by high temperatures or low oxygen concentrations, they rock their bodies laterally, presumably to expose the well-vascularized lateral folds to more oxygenated water. This behavior also has been observed in males that are brooding eggs. All are permanently aquatic, and although they readily leave aquatic holding tanks, especially at night and during the breeding season, they rarely are seen out of water under noncaptive conditions. Adult hellbenders use cutaneous respiration for about 95% of oxygen uptake at temperatures up to 77°F (25°C) and rarely surface in their natural habitat. In one Missouri stream hellbenders moved from still to moving water when temperatures reached 69–71°F (21–22.5°C), even though water temperature, oxygen concentrations, and pH levels were not significantly different between the sites. During the breeding season there is increased antagonistic activity, especially between mature males, which may result in serious injuries from bites.

Cryptobranchids feed on a wide variety of prey, including worms, mollusks, insect larvae, crustaceans, lamprey, fish and their eggs, anurans and their tadpoles, aquatic reptiles, and small mammals. They also feed on carrion and their own shed skin and eggs, and they are cannibalistic. Usually, most of the adults' diet consists of crustaceans and fish. The symphysis (fuse) of the two mandibles is flexible, with large bundles of elastic cartilage that allow one side of the mandible to be depressed as much as 40°. Asymmetrical suction feeding is accomplished when the mandible is quickly depressed and nearby prey are sucked into the mouth.

Asiatic giant salamanders and hellbenders breed from August through January, as day length decreases or is near minimal annual day length. During much of the breeding season, the water temperature also decreases. Fertilization is external. 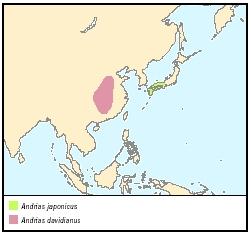 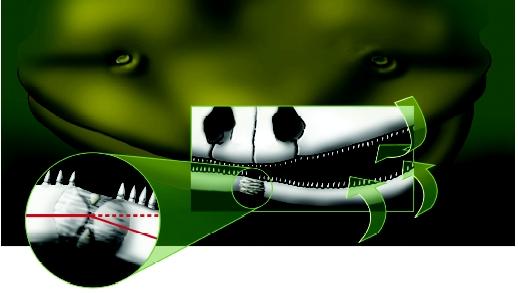 Symphyseal cartilage allows the jaw to move in a unique way during asymmetrical suction feeding. (Illustration by Brian Cressman)

As the breeding season approaches, mature cryptobranchids, especially males, become more diurnally active, searching for and obtaining brooding sites. These sites are typically under rocks or logs, with the opening facing downstream. Brooding sites also may be tunnels in banks or crevices in bedrock. Typically, a dominant male establishes a position at the entrance to the nest and either allows a gravid female into the nest cavity or drives her in; he may aggressively resist the female's efforts to leave before egg laying. As two strands of eggs begin to protrude from the female's cloaca (the cavity that serves as terminal depository for excretory, reproductive, and digestive material), males are attracted, perhaps chemically, and position themselves alongside

the female. The male rocks the lower portion of his body, dispensing sperm over the egg masses. The male then guards the eggs and the nest against intruders, including other members of the same species.

Nesting sites may be limited to one male and the eggs of a single female. However, communal nesting is well documented, and some nest sites may have numerous males and females. The social structure of many conspecifics of both genders within some nesting sites is not well understood. An Asiatic giant salamander may lay 400–600 eggs, which hatch in 50–60 days. A hellbender may have 150–750 enlarged ovarian eggs and communal nests with up to 1,946 eggs. Increased numbers of eggs deposited usually correlates with larger salamander size. Asiatic giant salamanders may live more than 60 years, and hellbenders are known to live 29 years in captivity and probably more than 30 years in the wild. Sexual dimorphism is evident just before and during the breeding season. During this period the cloacal glands of adult males exhibit enlarged swelling around the margins of the vent.

All extant cryptobranchid species have shown drastic population declines and fragmentation. The largest individuals within populations are much smaller and presumably younger than those cited in earlier studies. The IUCN categorizes the Japanese giant salamander (Andrias japonicus) as Vulnerable, and lists the Chinese giant salamander (Andrias davidianus) as Data Deficient.

Both the Chinese and Japanese giant salamanders are listed as CITIES I species and also receive other national and regional protection in their respective countries. Hellbenders (Cryptobranchus) are listed as species of special concern, threatened, or rare and endangered by state regulations in the United States. During the past century much of the giant salamander and hellbender habitat has been destroyed or degraded by channeling, damming, increased siltation, and pollution. There is evidence that overcollecting is decimating populations. The Japanese giant salamander was bred at the Amsterdam Zoo at the beginning of the twentieth century. Propagation efforts at the Asa Zoo in Japan began in the 1970s. The Asa Zoo teams have produced substantial husbandry information and were successful in breeding these salamanders during the 1980s. There are several propagation programs in Japan and China that harvest eggs from streams and hatch and raise these salamanders. In the United States substantial numbers of population and reproduction studies have been completed in Missouri's Ozark streams.

Extant cryptobranchids have been used as a human food source for centuries. In parts of Asia they were used in some medical and religious practices and were considered culinary delicacies until they gained protected status. In North America they were used for food, fish bait, and witchcraft (perhaps medicinal purposes). Large adult cryptobranchids are capable of delivering a severe bite to a finger or hand.

Nickerson, M. A. "Maintaining Hellbenders in Captivity: The Evolution of Our Knowledge." Proceedings of the American Association of Zoological Parks and Aquaria, Little Rock, Ark. 1977–1978: 396–399.

Nickerson, M. A., K. L. Krysko, and R. D. Owen. "Ecological Status of the Hellbender (Cryptobranchus alleganiensis) and the Mudpuppy (Necturus maculosus) Salamanders in the Great Smoky Mountains National Park." Journal of the North Carolina Academy of Sciences 118, no. 1 (2002): 27–34.