The Cosby Show, a situation comedy that ran for eight seasons on NBC Television, was one of the most intensely and immediately popular shows ever broadcast in America. The show, which went on the air in the fall of 1984, featured comedian Bill Cosby in the role of obstetrician-father Cliff Huxtable, and his family: attorney-wife Clair; daughters Sondra (eighteen), Denise (fifteen), Vanessa (eleven), and Rudy (five); and son Theo (thirteen). According to the December 5, 1985, issue of USA Today, the program premiered at the number one spot on the Nielson ratings, reached that spot ten times during the first season, and was number one in every age group. An estimated thirty million people tuned in every Thursday night during the peak of the show's run in the late 1980s. More significantly, The Cosby Show was the first American television show to feature the daily adventures of a prosperous, intact upper-middle-class family of African descent.

The source of the show's popularity and significance in television history stemmed not from Cosby's own intentional presentation of the ideology of African American upward mobility and the restoration of traditional family values to popular culture but from the sheer pleasure of the nearly plotless structure of the show. On The Cosby Show, the focus on the seemingly “insignificant” bits of business of everyday life became the show's main attraction. It was truly the first “show about nothing,” which Seinfeld later claimed to be. The first several episodes were drawn almost without alteration from Cosby's early 1980s stand-up routines, and it is primarily from his comic vision that the show emerged whole. The show created a safe, crisis-free world that viewers had a chance to enter for half an hour every week. Regardless of their ethnicity, gender, or age, many viewers immediately recognized themselves in the show: the Huxtable characters enacted the strikingly real ordinary domestic activities of the viewing audience. In its heyday, Thursday night became “Cosby night,” a time anticipated by viewers with relish. 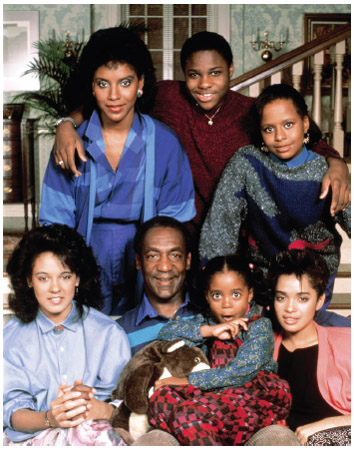 Only one family comedy show that aired before The Cosby Show got its start came close to this structural breakthrough. The Adventures of Ozzie and Harriet (1952–1966) portrayed a “real” family who “played themselves,” as it were. These shows were relaxed in the extreme, and the Nelsons themselves seemed to exist in a state of grace. Ozzie, the “head of the household,” never seemed to have an occupation and simply sauntered around the house all day. He lived the domestic life of a retired man with a servant (Harriet). There was, more importantly, some slight shift of focus to the everyday “doings” of life rather than on a very tight plotline. Ozzie and Harriet displayed only a glimmer of what The Cosby Show would bring to fruition and Seinfeld would later be so widely noted for.

One early episode of The Cosby Show, which concerned Cliff's looking after a slumber party of five-year-olds, disposed of some five to ten minutes of Cliff playing “bucking bronco” with the children: that is, bouncing some ten of them, one at a time, upon his knee. The episode was perhaps the most loosely scripted sitcom episode ever produced: the audience simply delighted in watching Cosby make real children laugh. At this point it was clear that the show's meandering tone was no mistake, no bug that needed to be worked out (as one might have originally suspected), but in fact it was the very secret of the show's success. The Cosby Show, as it appeared to viewers, seemed to be filmed as if the cameras were simply stuck in a window and left on, with the finished product being assembled at random. Viewers of the show luxuriated in a sort of celebration of banal, ordinary existence and thus participated in a validation of their own, often-overlooked daily life.

The most fascinating aspect of this is that the show's creators seemed utterly unaware of the reasons why people were glued to their show. Cosby, for his part, told Larry King in 1989 that the show was successful because now the parents always get to “win.” He reported his distress at programs such as Silver Spoons that depicted weak, incompetent parents led around by clever children. Cosby saw himself as the avenging parental Rambo of domestic comedy. The world the show created stands, however, quite apart from (and, indeed, opposed to) the ideological message Cosby sought to deliver.

What distinguished The Cosby Show from virtually all others in the family comedy genre was the almost total absence of struggle or conflict. There is a sense that some measure of real suffering and discord occurred in the past, in previous generations, but not anymore. The grandparents' function in the show is to give some hint of this, as is the display of various icons scattered about the Huxtable home. A picture of Martin Luther King Jr. reposed on the wall of eldest daughter Sondra's room. In one episode all of the trivial action stopped dead in its tracks when King's 1963 “I Have a Dream” speech appeared unexpectedly on the living room TV screen. It was as if the savior himself had appeared in an apparition. The message was clear: without that struggle, the Huxtables' idyllic existence would not be. Now, of course, all struggle is ended. If ever there were an ideal representation of Reagan-era complacency, this was it.

Observers eventually tried explaining the unprecedented success of the show by suggesting that it reflected “the love in the house.” In fact, a record album titled A House Full of Love, consisting of theme music connected with the show, was released during its heyday. The reason for this is not the adequacy of the explanation but Cliff's use of the language of “love” to diffuse any potential conflict. We love each other; therefore we cannot have a problem.

It is clear that, in the alternative universe of the Huxtables, problems are only apparent—they can't really exist. In one episode, Clair knocks fourteen-year-old son Theo's notebook off the kitchen table. A marijuana joint falls out of the book. The parents look at each other as if the sky had fallen. This cannot be happening in our house! Our house full of love! Theo is summoned to make some explanation of the event. He tells them it is not his and they believe him. (Huxtables, like George Washington, cannot tell lies.) This does not thoroughly satisfy Theo, who fears the loss of his parents' trust, so he drags the culprit who hid the joint in his book home with him to explain the situation to his parents. Cliff tells the boy from the errant outside world to see some adult about his problem—perhaps even the good doctor himself. It was not possible for Theo to have been the affected youth. Things like that did not happen to Huxtables.

In an episode from the 1985–1986 season, one of the girls tells Cliff that a friend needs a medical appointment with him and that he is not to contact the girl's parents. Cliff sees her and although it turns out to be a simple problem of no moral consequence, he becomes troubled (an uncommon state for Cliff). He is worried that his own children will not come to him if they have a problem. He gathers the children around to tell them that they must talk to him if they're ever in trouble; the kids let slip that they may already have gotten in trouble. When the tension increases, they indicate that they were, of course, only kidding. The episode ends on this note with nary a suspicion that they may have been telling the truth. Cliff had no reason to worry in the first place.

What the audience sees on The Cosby Show is what happens in that part of a fairy tale after it ends. The Huxtables are an upwardly mobile black American family living happily ever after. It is a life devoid of crisis and conflict, a fantasy of upward mobility with no costs—a real American dream. What viewers wanted from the show was a chance to sink into this vision of utopia, this perfect world in which to spend their half hour. Viewers responded to a utopian vision rooted in real aspects of the lives they actually lived, not Cosby's own ideological utopia of restored traditional family values. Cosby said he wanted his show to serve as both a teaching tool and a means to counter the prevailing trend of “weak parents” in both television and popular culture in general; he made the perhaps incorrect assumption that this message was what viewers most appreciated.

Near the end of the show's run, Cosby's own overt ideological intentions came to overcome the structure of the show. Cliff's funny faces that repress all tension were now backed up by overtly intimidating displays of parental might and even instances of outright emotional cruelty directed toward even the youngest Huxtable. At that point ratings began to dip, and other shows with characteristics similar to the earlier episodes of The Cosby Show soon appeared.

There was a time when Cosby himself saw the response to his show perhaps clearer than most observers. “I hardly ever watch my work, but with this show it's different,” he says. “I watch every week. And at the end of every segment, I find myself with a smile on my face, because I really like that family and the feeling they give me.”