For ten years, from 1974 to 1984, a fictional image of suburban Milwaukee, Wisconsin, brought the 1950s back to America through ABC's Happy Days. The picture of the world that was painted by this television comedy shaped a whole generation's image of the 1950s. It was a world of drive-ins and leather jackets, of cars and girls, but mostly of hanging out and solving day-to-day problems. It was noticeably not the 1950s of Joseph McCarthy and Korea. In the first seasons of the show, a number of episodes focused on specific 1950s topics, such as electioneering for Adlai Stevenson, beatniks, rock-and-roll shows, and gangs. After that, Happy Days settled into its stride to present a more general backdrop of the period, against which the Cunninghams and Fonzie developed as characters.

In addition to Laverne and Shirley and Joanie Loves Chachi, Happy Days spawned a Saturday-morning cartoon show, The Fonz and the Happy Days Gang. Also, the much-loved 1978–1982 sitcom Mork & Mindy was based on an episode of Happy Days. Indeed, the series was influential in setting the standard for popular comedies during the later 1970s and through the 1980s.

Happy Days was created by Garry Marshall, a veteran comedy writer who had worked on The Dick Van Dyke Show and produced The Odd Couple. Marshall produced a pilot for ABC in 1971 titled New Family in Town. The network was not interested, and the pilot later surfaced as a segment of Love, American Style. Aired on February 25, 1972, it was titled “Love and the Happy Day” and featured Ron Howard, Marion Ross, Harold Gould, and Susan Neher as a 1950s family acquiring their first TV set. In the meantime, however, film director George Lucas had seen the pilot and used it as the inspiration for his tremendously popular movie American Graffiti (1973), with Howard as a 1950s “Everyteen.” The success of the movie rekindled ABC's interest in Marshall's original pilot.

Over its lifetime, Happy Days was really at least three shows. This early incarnation was much like the 1950s comedies it emulated, offering a basic and likable story. The first two seasons focused on the life of Richie Cunningham (Howard) and his family, which consisted of his dad, Howard Cunningham (Tom Bosley), owner of a hardware store; his mom, Marion (Ross); and his little sister, Joanie (Erin Moran). Early on there was also 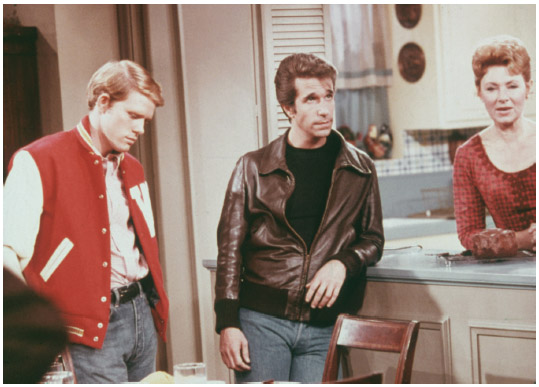 a basketball-wielding, monosyllabic older brother, Chuck (Gavan O'Herlihy), but he left the collective memory when cast changes were made after the second season. Outside of the family home, Richie's social life was lived primarily at Arnold's Drive-in, where he hung out with his friends Potsie Weber (Anson Williams) and Ralph Malph (Donny Most) and consulted with his leather-jacketed mentor, Fonzie (Henry Winkler). The Fonz soon became an audience favorite.

By the third season, things on Happy Days had changed. The show went to the top of the ratings and became the foundation for ABC's rise as the powerhouse of television in the 1970s. No longer just a show about the antics of high school kids, the series began to focus on the relationship of Fonzie and Richie, their mutual admiration and dependency, and the growth and development of Fonzie.

Eventually both the fictional Richie Cunningham and the actor Howard grew up and left the show, leaving it to feature a younger generation of characters and an adult Fonzie in its final years. While attention was transferred to Joanie and her friends in high school, still within the basic format, the dynamic of the show changed as Fonzie's transformation from rebellious youth to mentor and folk hero became complete.

Two things were true at the outset of this show. Before Howard would accept a role as another television youth (after practically growing up on the Andy Griffith Show), he made Marshall promise that his character would be allowed to age each year through high school into college. Fonzie had originally been envisioned by Marshall—and portrayed by Winkler—as a brooding, rebellious dropout. In one of those great bits of television folklore, the ABC network had decreed that Fonzie should wear a cloth jacket rather than the “threatening” leather one. Marshall suggested a compromise, permitting Fonzie to wear the leather jacket when he rode or worked on his motorcycle. So in the beginning, Fonzie was not seen without his motorcycle. Eventually, however, Fonzie rode his motorcycle less and less but continued to wear his leather jacket.

Fonzie was originally intended as a minor character. Because he proved to be extremely popular with the audience, the decision was made to emphasize the role. He moved into an apartment above the Cunninghams' garage in 1975. The move enabled Fonzie to maintain his independence but allowed the scriptwriters to involve him in the Cunninghams' domestic life. The Chuck character was no longer necessary, because Fonzie would fill the role as big brother to Richie.

As Happy Days moved into its second and third years, Fonzie received ever more attention. He made Happy Days unique and distanced the show from the middle-class family. In many ways the middle years of this show seemed simultaneously antiauthority yet accepting of it. Fonzie epitomized all that the middle-class 1950s were supposed to fear. He was cool, he was a dropout, and he got all the women. Fonzie was the working-class character and the leader of the youth pack around Arnold's Drive-in, the youth Mecca in Happy Days' Milwaukee. When Fonzie first came to the forefront, he was the prototypical “hood,” whose menace served as a counterpoint to the goodness of Richie and his friends.

This new Fonzie was a more human Fonzie, one who could show his feelings and vulnerability without sacrificing the essential toughness of his character. In this permutation, he became a combination of father confessor and guru to Richie's pals. Fonzie was the epitome of cool (almost to the point of caricature), the one who can dispense advice, settle disputes, and serve as role model. This was all a far cry from the standard 1950s sitcom, where only parents could dispense wisdom to Page 611  |  Top of Articlechildren and working-class, noneducated teens were perceived as a threat rather than a role model.

This new dynamic powered the show to its huge success. The rest of the characters, too, were pulled up with Fonzie. Over time, however, it got to be too much. It had too much formula and not enough pizzazz—so much so that several years of episodes would feature a trip (e.g., to a dude ranch, to Hollywood) where Fonzie can save the day by riding a bull or water skiing over a shark. He became one of the family and was thus diluted into a stereotype, a “good” role model, as the character was gradually stripped of most of his threatening qualities.

This was not all bad, and the interaction between Richie and Fonzie provided the opportunity to broaden the show's topics, while Ralph and Potsie were relegated to comic relief. In the fall of 1977, Richie, Potsie, and Ralph began college at the University of Wisconsin in Milwaukee. Joining the cast that season were Scott Baio as Fonzie's enterprising young cousin, Charles “Chachi” Arcola, who became Joanie's boyfriend, and Lynda Goodfriend as Richie's girlfriend, Lori Beth Allen.

Howard and Most left the series in 1980, written out by having Richie and Ralph leave to join the army. In May 1981 Richie married Lori Beth by proxy, and their baby, Richie Jr., was born in the fall of 1981. Meanwhile Fonzie had become a teacher of auto shop at good old Jefferson High. Joining the cast were Ted McGinley as Marion's nephew Roger, who became Jefferson's new basketball coach and English teacher, and Cathy Silvers (1980–1983) as Joanie's boy-crazy girlfriend, Jenny Piccalo. In the fall of 1982 Fonzie found himself falling in love with a divorcée named Ashley (played by Linda Purl). Ashley's daughter was played by Heather O'Rourke.

In addition, Crystal Bernard joined the show as Howard Cunningham's niece, K. C., who lived with the Cunninghams. One reason for this addition was that Joanie was not at home, having moved to her own (short-lived and unsuccessful) spin-off, Joanie Loves Chachi. By the fall of 1983, in what would be the final season of Happy Days, Fonzie had become the dean of boys at George S. Patton Vocational High. Joanie and Chachi, whose spin-off had flopped, came back to Milwaukee, and plans were made for their wedding. Also returning were Richie and Ralph, who showed up in a special two-part episode.

Increasingly, over its ten-year run, the life of the show took on a more 1970s feel in clothes, in language, and occasionally in story line. It retained the music and basic settings but seemed to stop caring about the period that was its inspiration. Although Fonzie rose to prominence, it was always Richie who provided the focus and balance for the show. When he left, the show was never the same again, and many would say it never recovered, despite staying on the air for four more seasons.

Although it appeared at the same time as such reality-based comedies as All in the Family and M*A*S*H, Happy Days opted for lighter humor and interaction. Due primarily to Fonzie, who became such a cultural icon that his leather jacket is part of the Smithsonian Institution collections, this show became a part of social consciousness. For the generation of Vietnam and Watergate, it represented a perfect combination: a nostalgic reflection on an earlier time when life seemed less difficult, with a strong character who can solve the problems and who, while allowing us to see his failings, can retain that strength. Last but not least, Happy Days reflected the problems of everyday life, placed at a safe remove and tempered by humor.