Created by the visionary writer Rod Serling, The Twilight Zone proved both a landmark of televised science fiction and a powerful touchstone in the pop cultural consciousness of the United States. The black-and-white anthology series, which ran on CBS from 1959 to 1964, generated lukewarm ratings when it was originally broadcast but has grown in public estimation over time. Over the course of its five-year network run, The Twilight Zone explored themes never before examined on television. It exposed the talents of a generation of character players, such as Jack Klugman, William Shatner, and Robert Duvall, who would go on to become household names for subsequent portrayals. It also cemented the legacy of its creator, who at the time was known principally as the author of socially concerned live dramas.

Serling created The Twilight Zone to serve as a forum for his commentary about technology, conformity, discrimination, and a whole host of other issues. Frustrated by his inability to explore these topics in mainstream dramas in the face of censorship by network executives and skittish advertisers, he hoped that the show's science fiction anthology format might allow him to introduce a little liberal orthodoxy to viewers without alarming the executives in control. But if Serling was in it for the advocacy, the show's other creative collaborators consistently pulled it back into the realm of traditional fantasy. This dialectic proved good for all parties concerned.

The Twilight Zone premiered on October 2, 1959. Its introductory episode, “Where Is Everybody?,” established the tone and creative parameters of the series. In it, a young man in air force garb finds himself in a seemingly deserted town. After increasingly frantic attempts to locate its inhabitants, he breaks down in despair. Only at the end is it revealed that the man is an astronaut being subjected to an experiment in an isolation booth and that the proceedings have been a hallucination.

In countless subsequent installments, The Twilight Zone would rely on this same formula of an ordinary human being suddenly beset by extraordinary circumstances. Quite frequently there was an unexpected twist at the denouement that cast the strange events in a new or supernatural light. To provide context and codify the cosmic significance of the events, Serling himself provided opening and closing narration, usually on camera in an immaculate Kuppenheimer suit.

To supply these dark melodramas from week to week, The Twilight Zone relied upon a stable of writers seasoned in the macabre arts of science fiction and fantasy. Along with Serling, short-story veterans Richard Matheson and Charles Beaumont formed a creative troika that was responsible for much of the series' high-quality teleplays. Matheson's scripts tended toward more hard-science content, such as the classic “Little Girl Lost,” about a child who vanishes through her bedroom wall into another dimension. Beaumont crafted some of the show's more horrific installments, such as the gothic gem “The Howling Man,” in which a traveler in Europe happens upon the devil being kept locked up in a cell in a monastery. Other important contributors to the series included George Clayton Johnson, Montgomery Pittman, Earl Hamner Jr., Reginald Rose, and Ray Bradbury.

It was the workaholic Serling, however, who took on the bulk of the creative burden. All told, Serling would write 92 of the 156 broadcast episodes. His influence over the show was especially keen during the first three seasons, 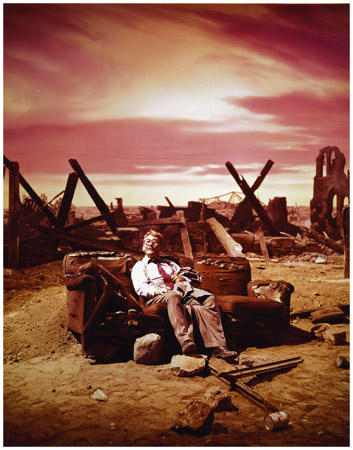 when he personally penned some of the program's signature installments. “Eye of the Beholder” addresses people's perceptions of beauty through the eyes of a bandaged and disfigured young woman whom viewers see revealed in a shocking climax. “Mirror Image” explores the nature of identity when a woman waiting in a bus station is suddenly confronted by her exact double. And the chilling “The Obsolete Man” touches on Cold War themes in relating the last days of a librarian of the future condemned to death for defending the utility of books.

Episodes like these allowed Serling to fulfill his vision of commenting on existential and political themes without incurring the wrath of advertisers and network executives. But the show's social concern also emboldened him to write all too pontifically at times, a problem that was exacerbated by his heavy workload. Too many of his episodes were written in a rush of sanctimony, with long, windy speechifying from the central characters on the major issues of the day. Even the many gems could not spare the program from lukewarm public interest.

The Twilight Zone was never a hit in the ratings and was in danger of cancellation by CBS almost from the start. At the end Page 190  |  Top of Articleof the third season, the network elected to expand the show to an hour in hopes that that might change its fortunes. The quality of the scripts suffered, however, with many seeming interminably padded at the new running time. After a desultory fifth season, during which most of the series best creative talent left, the show was finally canceled.

The Twilight Zone may have ended in 1964, but its influence continued to grow. Many of the show's writers, such as Matheson, took their talents to the big screen. Others remained to work in television. Hamner, who wrote several episodes for The Twilight Zone set in the rural backwoods, went on to create The Waltons, the long-running cornpone drama on CBS.

Fittingly, Serling remained the busiest of all. He cowrote the screenplay for Planet of the Apes in 1968, among other theatrical ventures. He also released a series of short-story adaptations of his classic Twilight Zone teleplays. Serling's talents, however, remained best suited for the small screen. He hosted a very Twilight Zone-like anthology series, Night Gallery, from 1970 to 1973, but network interference eventually drove him out of the medium altogether. He died following complications from open heart surgery on June 28, 1975.

Long after its network run had ended, The Twilight Zone remained a staple of syndicated reruns nationwide. Often aired late at night, it gave the creeps to a whole new generation of insomniacs who had not been around for the initial airings. The show's appeal was so broad that in 1977 Saturday Night Live could do a parody of it (with Dan Aykroyd doing a dead-on Serling) that had the audience howling with recognition. Serling's widow even launched a Twilight Zone magazine featuring new fiction in the tradition of the series. The time seemed ripe for a major revival of the franchise.

All did not work out as planned, however. In 1983 a Twilight Zone movie was released to much anticipation. In keeping with the spirit of the series, producer Steven Spielberg had opted for an anthology format, composed of three remakes of classic Twilight Zone installments and a fourth, all-new story. Up-and-coming directors Joe Dante (The Howling, 1981), John Landis (An American Werewolf in London, 1981), and George Miller (Mad Max 2: The Road Warrior, 1981) were brought in to helm three of the segments, with Spielberg handling the fourth.

Despite all that talent, however, and the best efforts of screenwriter Matheson, the result was a tepid mishmash that bombed at the box office. Each of the three remakes was markedly inferior to the original, while Landis's segment, the lone original story, was a sanctimonious misfire, dismissed by the show's aficionados as an unintentional parody of Serling. The fact that actor Vic Morrow was beheaded during filming did little to enhance the picture's public relations cachet and embroiled Landis in a career-threatening lawsuit.

Somewhat more successful—artistically, if not commercially—was a new Twilight Zone television series, launched in 1985 on CBS. The new show boasted a stellar lineup of creative talent, from Bradbury, Stephen King, and Harlan Ellison on the writers' side to directors such as William Friedkin, Dante, and John Milius. Actor Charles Aidman, who had appeared in two original Twilight Zone episodes, assumed Serling's post as narrator/moral contextualizer. A number of topflight episodes were produced, such as Ellison's brilliant “Paladin of the Lost Hour,” that recaptured the spirit of the old series. Budget cuts, network interference, and low ratings, however, eventually took their toll, and the series was mothballed for good in 1989.

The UPN network launched yet another version in 2002 with actor Forest Whitaker as host. The show not only dealt with current events but also featured remakes of classic episodes, such as “Monsters Are Due on Maple Street.” The show lasted one season but, like the original, was seen in reruns and on DVD.

In 2003 The Twilight Zone was ranked number twenty-six in TV Guide's list of the fifty “most entertaining or influential television series in American pop culture.” A year later TV Guide named the show the eighth most important cult TV show as “a series so unusual that they inspire what can be only called worship.” The show's fiftieth anniversary in 2009 brought more acclaim and attention, including a collection of short stories titled Twilight Zone: 19 Original Stories on the 50th Anniversary (2009) and a collection of graphic novels from Walker Books for Young Readers.

Four decades after its network debut, The Twilight Zone continued to intrigue both the general public and fans of the science fiction/fantasy genre. The phrase “Twilight Zone kind of feeling” entered the popular lexicon as a term for the series' quintessentially eerie sensation of otherworldly alienation. Marathon airings of the episodes generated powerhouse ratings for local syndicated stations, making the syndication package a prized possession within the broadcast industry. Its viability into a second millennium ensured that Serling and his unique vision would remain a permanent marker on the U.S. pop cultural landscape.