One of the most interesting and potentially exciting trends in space exploration in the late twentieth and early twenty-first centuries has been the move towards the privatization and commercial exploitation of space. Privatization refers to the transfer of operations from the government or public agencies to private sector management. Several organizations have

suggested that many aspects of the U.S. space program's involvement in the International Space Station (ISS) and all Space Transportation System (STS, or space shuttle) operations should be privatized. Such suggestions will likely be continued with the next manned U.S. space program. The commercial exploitation of space has been a key topic of interest since the space program began. Commercialization and privatization of space go hand-in-hand, but the words have somewhat different meanings.

“Commercialization of space” is the term used by the National Aeronautics and Space Administration (NASA) and the U.S. Department of Commerce to describe the technology transfer program, where technologies developed by NASA are transferred to the private sector. The term is also used to describe purely private ventures that seek to use space as a resource for making a profit. This includes satellite delivery systems, asteroid mining, space-waste disposal, space tourism, and medical or commercial uses of the ISS. One of the earliest satellites launched was a giant balloon named Echo, which was used as a test of satellite communications. Now, in the early twenty-first century, the space around Earth is filled with orbiting communications satellites, mostly owned and operated by private industry.

The commercialization of space offers new opportunities for private enterprise. While large aerospace corporations continue to dominate the industry, several small companies have been formed in recent years with the intention and stated goal of commercially exploiting space. Many former astronauts, and former NASA scientists and engineers, have moved on to these companies, suggesting that people with knowledge of space exploration consider privatization and commercial development of space enterprise the way of the future.

Individuals well suited for a career in aerospace tend to enjoy figuring out how things work; mathematics and science; solving puzzles, especially mechanical puzzles; building flying model rockets, model airplanes, or trains; learning new things; and working with computers. There are several different ways to prepare for a career in aerospace, including taking plenty of math and science courses in high school. For those interested in design, research, or development of new aerospace systems, a college degree is generally required, preferably in engineering or science, but not necessarily aerospace engineering. After completing a degree, many seek a job in the aerospace industry or a related field and immediately apply for on-the-job training for specialized aerospace fields. Because jobs in the aerospace industries are very competitive, enlisting in one of the armed forces and applying for specialized training or even flight school are also recommended.

For the most part, everything that flies in the air or orbits Earth is made by a company within the aerospace industry. As of July 1, 2011, the industry employed 479,900 workers in the United States. Almost

60 percent of that number (277,800) were production workers, accounting for about 2.8 percent of all manufacturing jobs in the United States (2008 data). The number of employees in the aerospace industry declined substantially from its peak of 578,600 in 1998 to its current level. The U.S. Bureau of Labor Statistics (BLS) has predicted that employment levels in the industry have leveled off and will remain close to their current levels until at least 2018. BLS predicts a total decrease in employment in the industry of 1.5 percent between 2008 and 2018 levels.

The economic downturn in the United States and Europe beginning in 2008 had a dramatic effect on midterm forecasts for the future of the aerospace industry around the world. Optimism about significant long-term growth has been replaced by caution resulting from the decrease in investment in aerospace projects in these parts of the world. Analysts now suggest that the next spurt in aerospace growth is likely to occur in China, India, and South American countries such as Brazil and Argentina.

Perhaps the most significant change in the aerospace industry in the United States in the foreseeable future is the reduced commitment to some important space programs, including the end of the space shuttle program in 2011 and President Barack Obama's (1961–) 2010 decision to cancel the U.S. Constellation project, designed to return a human to the Moon in the 2010s. As of 2011, the new vision for NASA includes an emphasis on basic research not directly tied to specific engineering projects and increased support for the privatization of space and aerospace projects, a change in course for which the economic and employment consequences are not yet clear. 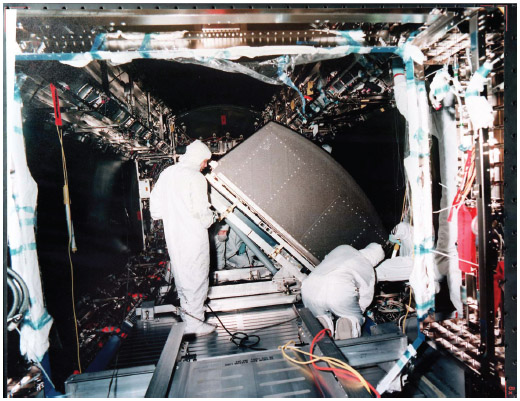 The aerospace industry is one of the largest employers in the United States. Here, Boeing technicians install the first of 24 system racks into the U.S. laboratory module for the International Space Station at the NASA Marshall Space Flight Center in Huntsville, Alabama. NASA.
Page 66  |  Top of Article

It is almost impossible to get a job in the aerospace industry without a high school diploma; a bachelor's degree is desired, at a minimum. However, there are many different opportunities for employment in the aerospace industry, at many different levels from high school graduates to persons with advanced degrees in science, mathematics, and engineering. At whatever level a person is employed, special training or skill preparation is required. Administrative assistants working in the aerospace industry must be able to handle the complex technical language used by the industry. Union workers must be trained in the special manufacturing techniques used in aircraft and spacecraft, including ceramics, fiber composites, and exotic metals. Many workers must obtain a security clearance, which includes extensive background checks.

A technical degree or advanced degree is not essential to work in the aerospace industry. Some jobs do not require a degree at all; however, they are becoming fewer in number each year. Engineers and scientists represent less than one-third of the workforce. The remaining two-thirds are nontechnical support personnel. In production companies that primarily manufacture hardware, the proportion of engineers and technicians may be as low as 10 to 15%.

The large portion of employees at a typical aerospace company includes 10 to 20% professional employees, such as managers, salespeople, and contract administrators. Mechanics, electricians, and drafters are another 5 to 10% of the employees. The remainder include human resource specialists, engineering records employees, secretaries, and assembly line workers.

The aerospace industry has managed some of the largest, most expensive, and complex projects ever undertaken by humans. Projects such as the Apollo missions, with the goal of landing humans on the Moon within a decade, and the ISS involved thousands of people, working all over the globe on different aspects of the project, who had to all come together at the right time and place. Learning to manage such huge projects requires excellent technical comprehension and outstanding management abilities.

Some critics have blamed NASA's “faster, better, cheaper” management approach, which was used on the series of “Discovery” class missions, for the spectacular failures of the Mars Climate Orbiter and Mars Polar Lander, in the 1998–1999 timeframe. Former NASA administrator Daniel Goldin has commented that in the 1990s NASA dramatically

increased its number of missions and decreased the time for each, while at the same time reducing the size of its staff. This resulted in less experienced program managers who received insufficient training and mentoring.

The lack of qualified managers has led to the development of specialized training in program management. Scientists or engineers who have traditionally managed programs in space-related industries learned to manage programs while on the job. Former astronauts or others working in the aerospace industry have also managed such programs.

Some missions within the Discovery program, such as NEAR Shoemaker, Mars Pathfinder, Lunar Prospector, Deep Impact, and Stardust, have been much more successful. Teams from industry, government laboratories, universities, and elsewhere are selected by NASA to develop and implement their own proposals, with a principal investigator as its lead. Although this new approach has led to some spectacular successes in the space program, it has also led to some notable failures.

In response to criticism and failures of NASA, in particular, and the aerospace industry, in general, the National Academy of Sciences completed a study and published a white paper with a suggested new design for program management in the late 1990s. While the report specifically addresses human exploration of space and a potential Mars mission, its principles are applicable to any large-scale endeavor. The report grouped its recommendations into three broad areas.

The last recommendation made by the study group was that human spaceflight programs and scientific programs should work with a joint program office that would allow collaboration between the human exploration and scientific components. As a model, the study group suggested the successful Apollo, Skylab, and Apollo-Soyuz missions.

The National Academy of Sciences, through its Space Studies Board, continues to conduct reports annually on the aerospace industry. In addition, in 2009, NASA initiated an independent committee to study and analyze its planned human spaceflight activities. That committee issued its report in October 2009, outlining a number of options available for continued manned flights into space. It enunciated a number of general principles for future manned spaceflight programs, including the need

to design programs that were consistent with economic reality, taking advantage of opportunities to use an international approach to programs and exploring a variety of space challenges ranging from low-Earth-orbit flights to the colonization of Mars and the Moon.