Three important developments during the first half of the twentieth century laid the foundation for both modern rocketry and careers within the field. The first was the inspired scientific and engineering work performed by Robert H. Goddard on solid propellant rockets, and subsequently on liquid propellant rockets, during the years 1915 through 1942. Remembered as the “Father of Modern Rocketry,” Goddard was a physics professor at Clark University in Massachusetts. Working mostly alone, with limited funds, he built and launched experimental solid and liquid propellant rockets and established the physical principles that enabled future rocket development to proceed.

The second event took place in Germany in the early 1930s. Goddard's work generated little interest in the United States, but it excited a small 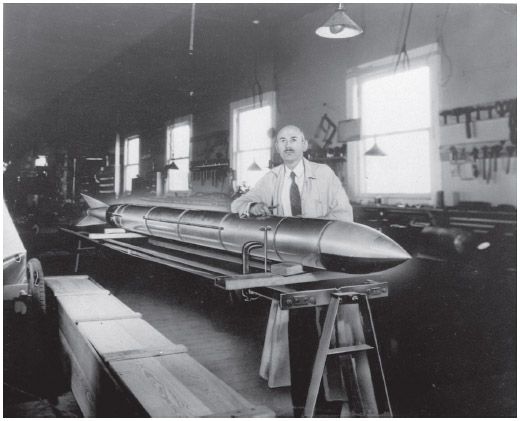 Robert Goddard, one of America's first rocket scientists, poses with one of his rockets at Roswell, New Mexico in 1938. © AP Images.
Page 70  |  Top of Article

organization of young German rocket enthusiasts called Verein Zur Forderung Der Raumfahrt (VFR). One of the leaders of that group was Wernher von Braun, who ultimately helped the United States in the space race against the Soviet Union to place men on the Moon. The VFR built successful experimental liquid propellant rockets and captured the interest of the German army. VFR members were then assigned to develop a long-range ballistic* missile that could deliver bombs to London, England. This huge effort ultimately resulted in the development of the V-2 rocket, which caused great devastation when it was used during World War II (1939–1945). In the space of a few months, over 1,300 V-2s were launched toward England. Technologically, the V-2 was an impressive development. It formed the prototype for most of the liquid-fueled rockets that were built over the next fifty years.

* ballistic the path of an object in unpowered flight; the path of a spacecraft after the engines have shut down

The third important development was the atomic bomb and the onset of the Cold War between the Soviet Union and the United States. This occurred immediately after the conclusion of World War II in 1945. Using V-2 technology, both nations embarked on enormous efforts to develop ballistic missiles that could deliver atomic bombs to any target. Coincidentally, that effort helped develop rockets capable of carrying payloads* into space.

* payload any cargo launched aboard a rocket that is destined for space, including communications satellites or modules, supplies, equipment, and astronauts; does not include the vehicle used to move the cargo or the propellant that powers the vehicle

Professionals in the field of rocketry work on two general types of rockets: liquid propellant and solid propellant. Each type has applications where it is best suited. A third type, called a hybrid, combines a solid fuel with a liquid oxidizer* . At the beginning of the twenty-first century, hybrids were in early development by the National Aeronautics and Space Administration (NASA).

The design and development of a rocket always begins with a requirement. That is, what is the nature of the mission that it is going to perform? The requirement could be established by the military, by NASA, or by a commercial enterprise concerned with exploiting opportunities in space. For the military, such a requirement might be putting a communications or spy satellite in Earth orbit. For NASA it might be launching a

spacecraft to Jupiter or sending a lander to Mars. For commercial enterprises, the requirement usually centers on communications satellites or Earth-observation spacecraft.

As an example of the work involved in the field of rocketry, consider what happens when NASA comes up with a new requirement, and no existing rocket is capable of handling the mission. An entirely new rocket design is needed. Working to the requirements, a team of designers and systems engineers synthesizes several different concepts for the new rocket. Like all rockets, it basically consists of a propulsion system, propellant tanks to hold the propellant, guidance and electronics equipment to control and monitor the rocket in flight, structure to hold the parts together, and miscellaneous components, valves, and wiring needed to make the rocket function. An advanced rocket that could complete the mission in a single stage might be included in the investigations, as well as various arrangements of two or more stages. In this phase of work, coordination with rocket engine and electronics systems manufacturers begins. Working together, the designers, engineers, and manufacturing professionals determine what is available, or what would need to be developed to make a particular concept work. Then the various concepts are compared in what are called trade studies, to determine which one can be built with the least cost, with the least risk, and on time, with the additional consideration of operational costs. Eventually each team will submit its best technical proposal and business plan, and subsequent evaluations and negotiations with NASA will culminate in placing a development contract with the winner.

Looking back to the beginnings of rocketry, Goddard served the functions of inventor, scientist, engineer, machinist, and test engineer, all combined into one. Modern design, development, manufacture, and operation of rockets require a broad array of professionals, including: mechanical, chemical, electronics, and aerospace engineers; thermodynamicists; aerodynamics and structural designers and analysts; manufacturing and tooling engineers; systems engineers; project engineers; and test engineers. For instance, mechanical engineers can be further divided into more specialized areas such as structural mechanics, fluid mechanics, orbital mechanics, and flight dynamics. In addition, rocket scientists also include physicists and mathematicians, along with professionals involved with materials science, reliability and safety, noise control, and flight test and reliability. Rocketry is now heavily computer oriented, so persons preparing for a career in this field should become proficient in computer-aided analysis, design, and manufacturing.

Preparing for careers in rocketry is much more interesting than it used to be in the past. Today, rocket contests for students are carried out around the United States. In fact, the world largest rocket contest is called the Team America Rocketry Challenge (TARC). The Aerospace Industries

The design and development of a rocket is always guided by the nature of the mission that it is supposed to perform, and it is carefully tested to ensure its suitability. NASA.

Association (AIA) and the National Association of Rocketry (NAR) sponsor the contest, which has been held annually since 2003. In this event, teams of students from 7th through 12th grade compete to design, build, and fly model rockets for a specified altitude and duration. The best teams from around the country receive scholarships and other prizes.

The Future of Rocketry

As the twenty-first century unfolds, rocketry is still in its infancy, and there are many important areas in which rocketry professionals will be needed in the future. It is too expensive to travel to space as an everyday occurrence, so technology must be directed toward reducing space launch costs. One way this could occur is with the development of intercontinental ballistic travel. The development of a rocket engine that can operate on air and fuel would make this possible. With this innovation, hundreds of daily suborbital flights across continents can be envisioned. Travel to space in similar vehicles will be much more economical, too. For instance, Virgin Galactic is one such private enterprise developing rides into space, through its SpaceShipTwo (built by Scaled Composites), that will someday be affordable for the general public. In space travel, scientists can forecast nuclear propulsion as a way to travel past the Moon, particularly if it turns out that water under the lunar surface can be readily mined. Nuclear steam rockets will then become common. Pulse plasma rockets, huge butterfly-shaped rockets that collect solar energy from the Sun, may also be used. Ultimately, for travel to distant star systems, the tremendous energy available in particle annihilation systems

(matter-antimatter rockets) could be applied in propulsion. Practical containers for antimatter* may be impossible to achieve. However, the secret may be to use antimatter as fast as it is generated—a challenge for rocketeers of the twenty-first century.