Outer space has a very different environment from that of Earth. The atmosphere, radiation, and gravity levels are so drastically varied that several major adjustments are made to protect astronauts from the deadly effects of the space environment on the human body. Thus, space medicine involves the practice of medicine on humans living and working in outer space. In particular, gravitational effects are not well controlled and the effects of long-term exposure to microgravity* are unknown.

* microgravity the condition experienced in freefall as a spacecraft orbits Earth or another body; commonly called weightlessness; only very small forces are perceived in freefall, on the order of one-millionth the force of gravity on Earth's surface 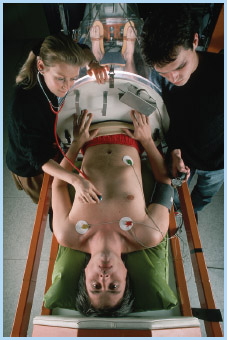 When in space, humans experience decreased aerobic capacity, endurance, strength, and muscle mass. Physicians in space medicine conduct tests to determine what types of exercise will most benefit astronauts who spend extended periods of time in space. © Roger Ressmeyer/Corbis.

Several experiments have already indicated that major biological changes begin in the human body within minutes of spaceflight. For example, when a person is exposed to microgravity, there is less blood volume in the legs and more in the upper body. This change makes the brain sense that there is too much fluid in the body and triggers an adaptive response such as increased urine production. This is similar to the sensation experienced by many people upon entering a swimming pool. Even the chemical composition of blood and urine is altered, which perhaps reflects that other body tissue and organ changes are taking place in response to the loss of gravity. Given all of the effects of spaceflight upon the human body, several career opportunities exist to study and treat future space travelers.

Several questions remain about the scope of space medicine because scientists do not understand all of the changes that take place in the human body either on Earth or in space. Can all of the problems be treated? Is a treatment really needed? Is the prevention of adaptive changes that occur when humans go to space better than treatment after a change has already taken place? How can medical problems in space be prevented? Will the body's cells, tissues, and organs return to normal at different rates upon landing back on Earth or on another planet with similar gravity?

Because scientists understand so little about how the human body works in normal gravity on Earth, few specific cures have been found for medical conditions. Doctors often can only treat symptoms and not the causes of diseases. For instance, allergy medication eliminates the symptoms of the malady* , but when a patient stops taking the medicine, the symptoms may return. A heart may no longer be able to beat properly, but a device such as a pacemaker can assist in doing the job. In neither

* malady a disorder or disease of the body

of these cases has the underlying disease been either treated or cured. If the main objective is to find a cure for a problem, how can this be done if what needs to be fixed is unknown? And how does one know what to fix if it is not known how the body normally works?

Scientists must therefore conduct experiments on Earth and in space to: (1) understand how the body normally functions in these two environments, (2) determine how diseases and other medical conditions develop, and (3) either find a specific cure or prevent the disease. Perhaps scientists will also discover that, in some instances, the adaptations the human body makes in space are not all necessarily bad or in need of medical attention.

During the late 1950s to early 1960s, in the early years of spaceflight exploration, it was impossible to anticipate every change in bodily function that would occur to those venturing into space. It was unclear if even simple tasks such as swallowing would become a health hazard for the astronauts (i.e., is gravity needed to “pull down” food and water into the stomach?). The answers to this and other questions were found by successfully sending animals and then Russian cosmonauts and U.S. astronauts into short spaceflights.

By the early twenty-first century, scientists had gained a better understanding about how day-to-day, bodily activities are affected by micro-gravity. Though some negative side effects are indeed experienced (e.g., difficulty with eyesight focus, loss of balance, nausea), astronauts have by and large returned to live healthy lives on Earth.

Longer flights and numerous experiments later, scientists have a better idea of what may pose as a medical threat during long-term exposure to microgravity. These issues must be resolved to enable extended stays on the International Space Station (ISS) and flights to land humans on other planets such as Mars. The problems include a loss and reorganization of bone mass as well as loss of muscle strength and mass. If muscles are heavily used on Earth (such as with weight lifters), they become stronger and larger. Under the weightless conditions of space, the muscles no longer work as hard and become smaller (a condition known as atrophy). In space, the blood itself becomes weightless, and the heart will eventually atrophy because it has to work less to pump blood through the body. After a long trip in space, a sudden return to Earth might make an astronaut appear to have heart failure. Similarly, if bone does not sense the need to support the body against the effects of gravity, then spaceflight-induced bone loss might lead to osteoporosis-like problems upon a return to Earth.

To prevent microgravity-associated health problems and to ensure a safe return to normal bodily function, more studies are needed. Among the key areas for current and future research are diet, exercise, genetics, and whether or not hormones can produce their normal effects, both during and after spaceflight. Scientists and physicians trained to deal with these

issues are needed both on the ground (e.g., in preparation for spaceflight) and as part of the flight team. Furthermore, understanding how the body changes in space will aid in the development of cures here on Earth, in addition to helping maintain the medical health of space travelers. For example, once it is known how bone is altered in space, would the discovery of a treatment also be useful to prevent or reverse osteoporosis?

The collective efforts of many biomedical-related fields are needed to fully understand and develop ways of coping with the effects of micro-gravity on the human body. The body is an integrated system in which different cells, tissues, and organs affect or interact with one another. When one system is altered, there are usually consequences to another system. Simply getting out of bed in the morning leads to many integrated changes—blood flows and pools in the legs, the blood vessels counteract this by contracting to “push” the blood upward, heart rate increases, and various hormones are released to prepare for the day's activities.

In 2008, a group of medical organizations signed a memorandum of understanding to work together for the betterment of the civilian space-flight industry. With the intent to provide better space medicine resources, Wyle Laboratories, the University of Texas Medical Branch at Galveston, and Mayo Clinic (Arizona) joined forces for the research and development of a comprehensive space medicine resource. As humans venture more out into space, such agreements, from the private and public sectors, will help to assure safe journeys for these astronauts to distant worlds and around Earth.

Because of the integrative nature of human bodily functions, there are many career opportunities for basic research in such disciplines as pharmacology, biochemistry, biology, chemistry, physiology, and genetics. Physicians and other health-care professionals can then apply newly discovered biomedical information to ensure the continued improvement of human health on Earth and in space. When scientists work to make space a better place to work and live, they are also helping to make medical treatment on Earth better, especially in isolated rural areas, on the battle grounds of wars and conflicts, and at the scenes of natural and human-made disasters.