The ability to communicate with others is necessary in all avenues of life. However, in space science and technology it is critical to the successful furtherance of spaceflight objectives. One reason is the lesser importance that most individuals assign to the endeavor. Indeed, a central feature of communication efforts throughout the space age has been the coupling of the reality of spaceflight with the American imagination for exploring the region beyond Earth. Without it, humans might never have slipped the bonds of Earth, ventured to the Moon, and sent robots to the planets. In the process, the dreams of science fiction aficionados have been combined with developments in technology to create the reality of a spacefaring people.

An especially significant spaceflight “imagination” came to the fore after World War II (1939–1945) and urged the implementation of an aggressive spaceflight program. It was seen in science fiction books and film, but more important, serious scientists, engineers, and public intellectuals fostered it. The popular culture became imbued with the romance of spaceflight, and the practical developments in technology reinforced these perceptions that for the first time in human history space travel might actually be possible.

There are many ways in which the American public may have become aware that flight into space was both real and should be developed.

The communication of space exploration possibilities through the written, photographic, and electronic media began very early in the history of the space age. Since the 1940s, science writers such as Arthur C. Clarke and Willy Ley had been seeking to bring the possibilities of spaceflight to a larger audience. They had some success, but it was not until the early 1950s that spaceflight really burst into the public consciousness.

In the early 1950s, the German émigré scientist Wernher von Braun, working for the army at Huntsville, Alabama, was a superbly effective promoter of spaceflight to the public. Through articles in a major weekly magazine, Collier's, von Braun urged support for an aggressive space program. The Collier's series, written in 1952, catapulted von Braun into the public spotlight as none of his previous activities had done. The magazine was one of the four highest-circulation periodicals in the United States during the early 1950s, with over three million copies produced each week. If the readership extended to four or five people per copy, as the magazine claimed, something on the order of 15 million people were exposed to these spaceflight ideas.

Von Braun next appeared on a variety of television programs, including a set of three highly rated Disney television specials between 1955 and 1957. These reached an estimated audience of 42 million each and immeasurably added to the public awareness of spaceflight as a possibility. As a result, von Braun became the public intellectual advocating space exploration, an individual recognized by all as an expert in the field and called upon to explain the significance of the effort to the general population.

The coming together of public perceptions of spaceflight as a near-term reality with rapidly developing technologies resulted in an environment more conducive to the establishment of an aggressive space program. Convincing the American public that spaceflight was possible was one of the most critical components of the space policy debate of the 1950s and 1960s. For realizable public policy to emerge in a democracy, people must both recognize the issue in real terms and develop confidence in the attainability of the goal. Without this, the creation of the National Aeronautics and Space Administration (NASA) and the aggressive piloted programs of the 1960s could never have taken place.

The powerful spaceflight concepts championed by von Braun found visual expression in a wide-screen Technicolor feature film released in 1968, 2001: A Space Odyssey. Director Stanley Kubrick brought to millions a stunning science fiction story by Arthur C. Clarke about an artificially made monolith found on the Moon and a strange set of happenings at Jupiter. With exceptional attention to science fact, this film drew the contours of a future in which spaceflight was assisted by a wheel-like space station in orbit, a winged launch vehicle that traveled between Earth and 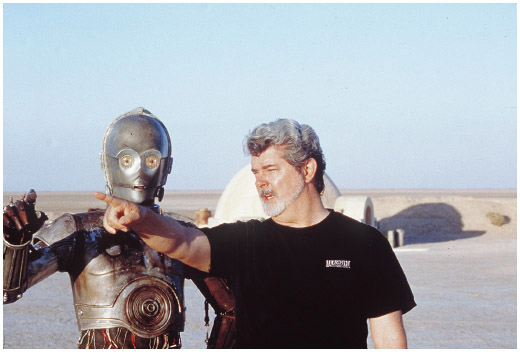 George Lucas, the creator of Star Wars saga, on the set of the second episode: Attack of the Clones. © LucasFilm/20th Century Fox/The Kobal Collection/Tomasetti, Lisa.

the station, a Moon base, and aggressive exploration to the other planets. All of this was predicted to be accomplished by 2001, and the director and the technical advisors were concerned that their vision might be outdated within a few years by the reality of space exploration. It was not, and their vision still is far from becoming reality.

The Impact of Photography

The photographic record of spaceflight has also served to sustain interest in the endeavor. For example, the photographs taken of Earth from space sparked a powerful reaction among those who viewed them for the first time. Project Apollo forced the people of the world to view planet Earth in a new way. In December 1968, Apollo 8 became critical to this change, for the image taken by the NASA crew, “Earthrise,” showed a tiny, lovely, and fragile “blue marble” hanging in the blackness of space with the gray and desolate lunar surface in the foreground as a stark contrast to a world teeming with life. Poet Archibald MacLeish summed up the feelings of many people when he wrote, “To see the Earth as it truly is, small and blue and beautiful in that eternal silence where it floats, is to see ourselves as riders on the Earth together, brothers on that bright loveliness in the eternal cold—brothers who know now that they are truly brothers.” (MacLeish, December 25, 1968) The modern environmental movement was galvanized in part by this new perception of the planet and the need to protect it and the life that it supports.

Astronomer Carl Sagan emerged as a public intellectual on behalf of space exploration in the 1970s in much the same way that von Braun had in the 1950s. An academic on the faculty at Cornell University (Ithaca,

New York), Sagan eschewed the scholarly trappings of the “ivory tower” to engage the broadest possible audience directly through writing, speaking, and television appearances. His brilliant thirteen-part Cosmos series on public television in 1980, like the Collier's series of von Braun, captured the imagination of a generation of Americans about the wonders of the universe and energized the public debate concerning space exploration in the 1980s. In part, the increases in federal budgets for space activities could be related to the excitement generated by Sagan's compelling arguments.

Sagan went on to fill von Braun's shoes as a public intellectual with verve until his death in 1996. He wrote best-selling nonfiction, such as Cosmos (1980) and Pale Blue Dot: A Vision of the Human Future in Space (1994), and a novel, Contact (1985). Always he drew a tight relationship among technical capabilities, philosophical questions, and human excitement and destiny. He rarely wrote for academic audiences, as was normal for other scholars, and published more articles in Parade magazine, reaching millions of readers, than in professional journals. He also took on the proponents of pseudoscience* , especially efforts to convince individuals of extraterrestrial visitations to Earth, publishing a major work on the subject, The Demon-Haunted World (1995), near the end of his life. Sagan appeared on popular talk shows such as The Tonight Show with Johnny Carson and, later, with Jay Leno to espouse his vision of a hopeful future in space. His belief in a universe filled with life, and humanity's place in that universe, came to the big screen in 1997 with the making of Contact into a feature film starring Academy Award winner Jodie Foster.

Opportunities in the Field

Opportunities to expound a compelling vision of a future in space exist in all arenas available for communication. Using written, photographic, and multimedia forms of communication, future writers and visual artists have the opportunity to become public intellectuals whose ideas expressed in these forms will shape the future of spacefaring in the United States. Indeed, it is largely up to such individuals to frame the debate on the future of spaceflight. Will the astronauts and their voyages to the Moon be remembered as being akin to Italian explorer Christopher Columbus and his voyages to the Americas—as vanguards of sustained human exploration and settlement? Or, will their endeavors prove to be more like Leif Eriksson's voyages from Scandinavia several hundred years earlier, stillborn in the European process of exploration to new lands? No one knows yet, but the public intellectuals of the future using all of the tools of communication available to them will be the ones to prompt both the policymakers and the public to make decisions about sustained exploration.