During just the last few years of the twentieth century, astronomers began to find planets orbiting other stars. They also made detailed measurements of the remnant radiation left over from the Big Bang* and identified the first appearance of structure in the universe, the structure that eventually led to the formation of stars and galaxies. Some astronomers even found tantalizing evidence that suggests that the expansion of the universe may be speeding up, perhaps because of previously unrecognized properties of space itself. These important findings and many others lead to a particularly exciting time to consider a career in astronomy or space science.

When considering such a career it is important to realize that nowadays most astronomy is not classical astronomy—observing or photographing astronomical objects. Instead it involves the use of physics, mathematics, or geology to understand these objects. Many “astronomy” departments at colleges and universities are, in fact, called departments of astrophysics or planetary science. A significant number of Ph.D. candidates in astrophysics hold an undergraduate degree in physics or mathematics. Many Ph.D. candidates in physics departments choose thesis topics that involve astrophysics, because some of the most interesting topics in modern physics are topics in this field. In this article, “astronomy” should be understood to encompass astrophysics and the other fields mentioned above.

Students interested in a career in astronomy must be prepared to work hard during their training. A Ph.D. is required for those interested in doing research; the average Ph.D. takes approximately seven years to earn. During their education, students pursuing doctoral degrees in astronomy take approximately twenty physics courses and a similar number of courses in mathematics. Those who enjoy science and problem solving will enjoy much of this, although it is challenging work. As early as possible, it is important for students to gain research experience. Most scientists find research much more interesting than class work. Nowadays many national observatories and universities offer research experience for undergraduates, an opportunity that should be taken advantage of when one is still in college. This kind of “internship” 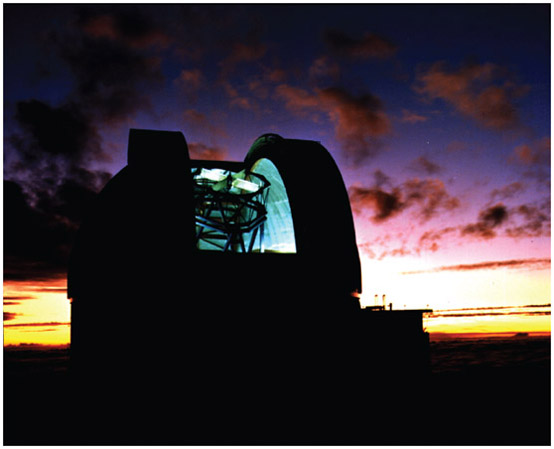 is the best way for students to determine whether they will really enjoy a career in astronomy.

Those aiming to become faculty members will probably hold one or more two-to three-year postdoctoral positions before they can hope to earn a tenure-track appointment. Be forewarned that less than half of those who seek a tenured faculty position actually earn one. Nevertheless, the problem-solving and analytical skills learned during training for an astronomy Ph.D. are good preparation for a number of possible jobs, not just as a professor of astronomy. Indeed, people with doctorates in astronomy have applied their problem-solving and computer skills in a variety of jobs, including computer consulting and business. Those who prepare for a career in astronomy with a flexible attitude about the job that they will eventually take are less likely to be disappointed than those who have very fixed career goals.

The largest employers of astronomers are colleges, universities, and the government. Large government employers included the National Aeronautics and Space Administration (NASA) and the national observatories, such as the National Optical Astronomy Observatories (with branches in Arizona, New Mexico, Hawaii, and Chile), the National Radio Astronomy Observatory, and the Space Telescope Science Institute. With the proliferation of national facilities and the communications network provided by the Internet, it is possible to do first-rate astronomy work at many universities and colleges, even some of the smaller ones. Many of these schools emphasize the quality of their teachers, and those interested in being hired by such a school should acquire good communications skills as well as scientific and technical training.

More and more astronomy is being done using observations made from space missions, and NASA is playing an increasingly large role in astronomy. Highlights of current or planned NASA missions include: the exploration of Mars and Saturn—the later planet, along with its moons and rings, is currently being explored by the NASA/European Space Agency Cassini mission; the use of large telescopes to observe infrared* light from space (such as with NASA's Spitzer Space Telescope), as well as from a 747 aircraft, referred to as SOFIA (Stratospheric Observatory for Infrared Astronomy); and the development of a number of interferometers* that will search for planets orbiting other stars and will eventually produce images of those planets. These kinds of missions are always done in large teams, so good teamwork and communications skills as well as good scientific and technical skills are desirable when working for NASA. For those interested in engineering—in building and testing instruments—there are also many interesting opportunities working on space missions. As the equipment used in astronomy becomes more complex, the field will require more and more people skilled in engineering, interferometry, and similar techniques. It is possible that a shortage of people with these skills who want to work in astronomy and space science could develop.

Another aspect of astronomy is closely related to mathematics and computer science. Much of the theoretical work in astronomy now involves sophisticated modeling using powerful computers. Students interested in computer-based analysis might consider applying their skills to astronomy. Theoretical astronomers build computer models of the Sun and stars, of supernovas, of high-temperature explosions that produce x rays* , of interacting galaxies, and even of the formation of the first structure in the entire universe. Many current and planned investigations, such as the Sloan Digital Sky Survey, will observe and record hundreds of millions of objects. Astronomers are just beginning to plan for a National Virtual Observatory, which would develop new ways to analyze the large data sets that will soon be gathered.

Career Options for Those with Bachelor's and Master's Degrees

Career options for those with a bachelor's or a master's degree in astronomy are more limited than for those holding a doctoral degree. All of the NASA missions and some of the observatories described in this entry hire research assistants or data assistants to help with operations and data analysis. People in such positions may work on very interesting science but they do not usually have the opportunity to choose their own projects or areas of investigation.

Because astronomy is such a popular subject, there are a number of opportunities for presenting astronomy to the public. Planetariums hire astronomers to work as educators, and most NASA missions hire people to provide educational services and public outreach. The standards for these positions are highly variable, and often do not require a Ph.D.

One of the most important jobs available to someone with training in astronomy is teaching physics (and sometimes astronomy) at the high school level. Considerably less than half the people who teach physics in high school have been trained in the field, and this is one of the contributing factors to the poor science knowledge of American students. Anyone who pursues the astronomy studies described above, even through the first year or two of graduate school, would have more physics background than the typical high school physics teacher, and this could provide a good background needed for teaching.

Opportunities for Women and Minorities

It is important to note that opportunities for women in astronomy have been increasing and may continue to do so. Approximately 25 percent of the Ph.Ds now granted in astronomy go to women. This is twice the percentage of Ph.Ds granted to women in physics. Studies also show, however, that women continue to drop out at higher rates than men at each career step. One reason for this at the beginning of a career is that it is harder for women to find role models, mentoring, and encouragement in a field where most of the professors are male. It can be very helpful for women interested in a career in astronomy to make contact with women already in the field. Organizations such as the American Astronomical Society can provide further information.

The number of minority students in astronomy is currently very small. Out of the total of 150 astronomy Ph.Ds that are awarded in the United States annually, only a very small percentage of these are received by African-American and Hispanic students. Students with a minority background who are interested in the exciting field of astronomy would also profit by finding a mentor. In fact, most successful scientists, no matter what their background, took advantage of guidance or mentoring from someone in the field during their training.

Committee on Science, Engineering and Public Policy. Careers in Science and Engineering: A Student Planning Guide to Grad School and Beyond. Washington, DC: National Academy Press, 1996.