Considering possible career options in space science can be as full of variety and inviting choices as selecting from an elegant buffet or wandering through the stalls of an exotic overseas bazaar. Space science, the study of everything outside of Earth, now encompasses practically all areas of science, and space research draws on an even broader collection of skills and specialties beyond the pure sciences. Some of the divisions within space science include astronomy, astrophysics/cosmology, astrobiology, galactic science, planetary (non-earth) science, astronautics/spaceflight, space habitat/colonization, and space defense/weapons.

One way to think about careers in space science is to notice that there are two main areas. First, there are specialties in which scientists place their tools in space so that they can see aspects of nature that cannot be examined from the ground. These approaches, which might be called “science from space,” include research in astronomy and research that looks back at Earth from space. In the second category are researchers who take advantage of unique aspects of operating in an orbital laboratory or on another planet to do experiments or exploration that would not be possible otherwise. They conduct “science in space” by making space, itself, their laboratory.

Astronomers build or use telescopes that are launched into space to study the universe by measuring the infrared* , x-ray, and gamma-ray light that cannot be detected below Earth's atmosphere. They also make observations in the visible spectrum* but with much greater clarity than astronomers often can accomplish from the ground. These space astronomy studies examine the Sun, nearby stars, more distant galaxies, and even objects at the very edges of the universe.

Science from space can involve looking in as well as looking out. Information about our own planet, Earth, can often be obtained best by getting a genuinely global view from space. Such research includes studies in climatology, atmospheric science, meteorology* , geology and geophysics, ecology, and oceanography, just to name a few. Looking at Earth from space is a good example of how space science can span a full range of goals. Those goals can include exploring very basic questions about how nature operates, gathering information that has important and immediate value to help society deal with natural hazards, or the management of natural resources, agriculture, forestry, or environmental problems.

* meteorology the study of atmospheric phenomena or weather

Science in space takes advantage of being in the immediate presence of the objects of study, or of some unique properties of spaceflight, such as the existence of very low gravity (so-called microgravity) or a nearly perfect vacuum* . In the former case, space scientists study the properties of the space environment itself, including the hot gas that flows out from the Sun to fill the solar system and the high-energy atomic particles that create radiation belts* around many planets. Those belts can pose a hazard 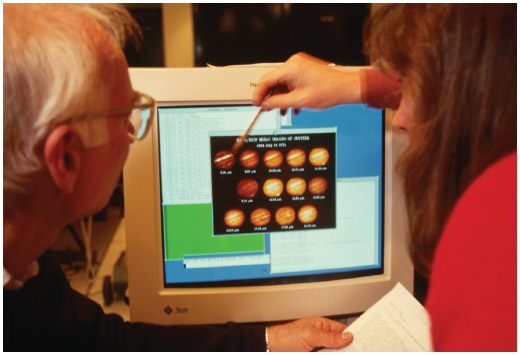 to astronauts or to any robotic spacecraft that fly through them. Planetary scientists explore other objects in their own solar system. They use orbiting telescopes, spacecraft that are sent to orbit other planets, robots that land and move around on the surface of another planet, and spacecraft that retrieve samples of planetary material and bring them back to Earth for analysis. These scientists also study the natural satellites of other planets as well as asteroids and comets.

The microgravity environment of spaceflight creates opportunities for in-space laboratories that span a wide range of scientific topics. These include biomedical studies of how weightlessness affects human performance and how to minimize those effects on astronauts. It also includes more basic studies in biology, which examine the role of gravity (or the effects of a lack of gravity) in the development and functionality of plants and animals. Researchers in the physical sciences find space laboratories to be equally useful because they offer a unique setting for experiments in materials science, studies of combustion and the behavior of fluids, and a number of other areas of both basic and applied physics and chemistry.

Many areas of space science are now reaching across the traditional specialties of science and emerging as new multidisciplinary fields. Two notable examples are studies of global change and the field of astrobiology. In studying global change, scientists combine expertise from many Earth science specialties (e.g., oceanography, hydrology, atmospheric science, ecology) and use the vantage point of space to monitor how Earth is changing and to predict and understand the consequences of those changes. Astrobiology is a relatively new field in which researchers seek to understand how life formed in the universe and how it has evolved. Astrobiologists also want to discover whether there was, or is now, life beyond Earth, and to learn about the possibilities for life beyond Earth in the future. As a result of the breadth of such profound scientific questions, astrobiologists draw heavily on expertise in biology, chemistry, astronomy, and planetary science.

In all fields of space science, those who conduct research may find themselves involved in many phases of the work. That is, they may help design the experiments, the instruments, and even the spacecraft that carry them. They help build and test the instruments to be launched into space and then help operate them, and they are often involved in analyzing and interpreting the measurements that are returned to Earth. In a small number of cases a few lucky researchers get to go with their experiments into space as scientist astronauts.

Space science offers career opportunities that extend beyond pure scientific fields. Space science depends not only on scientists but also equally heavily on engineers, mathematicians, information technology experts, and other technical specialists who help make the research possible. In fact,

Finally, where do people in space science work? That is also a question with many answers. Most space scientists are on university staffs and faculties, but they also reside in industry laboratories, government laboratories such as the National Aeronautics and Space Administration's field centers, and in laboratories of nonprofit organizations. Regardless of where they work, people who earn their living in space science have a common bond. They share in the excitement and fascination that comes from pursuing some of the most challenging questions in contemporary science, and they know that they are helping to open new frontiers in exploration and to bring the benefits of science back to Earth.

Schwartzkroin, Philip A. So You Want to Be a Scientist? New York: Oxford University Press, 2009.