In the twenty-first century, humankind is taking its first tentative steps toward a permanent presence in space after retreating from that goal in the late twentieth century, when the American lunar program ended. The goal then consisted only of a piloted round trip to the Moon's surface, a mission prompted by rivalry between the global superpowers of the United States and the Soviet Union. In the future, the mission will be the inhabitation of space and other worlds, a mission prompted by a variety of goals. Consequently, in the twenty-first century, many opportunities will exist for careers in space-based organizations.

Since the start of the “space race” in the late 1950s, when the Soviet Union launched the first satellite, Sputnik 1, and the United States took up the challenge to go to the Moon with the Apollo program in the 1960s, each generation has found inspiration that has urged it on towards space and motivated it to join the effort. At each step, a new generation of thinkers and pioneers has come forward to meet the challenge.

The initial inspiration was the beeping signal broadcast from Sputnik 1. Then came U.S. President John F. Kennedy's challenge to visit Earth's nearest neighbor: “I believe that this nation should commit itself to achieving the goal, before this decade is out, of landing a man on the Moon and returning him safely to Earth.” It was a momentous achievement when, in 1969, astronaut Neil Armstrong stepped onto the Moon and said: “That's one small step for [a] man, one giant leap for mankind.” However, the piloted effort that culminated with the Apollo Moon landings seemed to flounder and retreat into science fiction, which was where people turned next for inspiration.

That inspiration came from such science fiction stories as Star Trek (“Space … the final frontier.”) and Star Wars (“A long time ago, in a galaxy, far, far away …”), and soon a space industry sprang up. This industry is based primarily on missiles and satellites for military and communications purposes. But the desire to return people to space lived on, in part through the development of the space shuttle program (Space Transportation System) and through the former Soviet Union, which operated the space station* Mir. Mir was allowed to fall back to Earth to make way for the International Space Station. The international collaboration involved in the space station reflects the high costs of the effort. This collaboration extends to unpiloted missions. Recent payloads* to Mars on American, Russian, Japanese, and European missions have also been often times international in nature.

* space station large orbital outpost equipped to support a human crew and designed to remain in orbit for an extended period; to date, only Earth-orbiting space stations have been launched

* payload any cargo launched aboard a rocket that is destined for space, including communications satellites or modules, supplies, equipment, and astronauts; does not include the vehicle used to move the cargo or the propellant that powers the vehicle 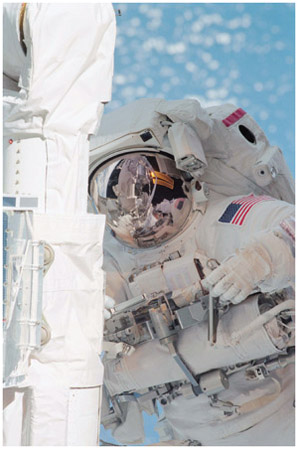 To secure an off-world presence, skilled individuals from a variety of professions will be needed to meet the challenges that arise. The next and future generations will require all of the skills that got humanity into Earth orbit and onto the Moon. People from many different professions, some clearly space-related and others less obviously associated, will be needed. Professions that helped humanity reach the Moon include astronautics, rocketry, space medicine, and space science.

Foremost are the dreamers who fire each generation's imagination, including visionary scientists and science fiction writers. They meld what is and what has been with what could be. Using new scientific knowledge, they imagine concepts such as human settlements on planets in this solar system and distant solar systems, propulsion systems capable of speeds near the speed of light, and years-long missions with crews that are hibernating or even embryonic, to be raised and educated at the destination in order to minimize the consumption of supplies during the long trip.

Scientific research conducted in space will add fuel to these fires of the imagination, and will provide work for astronomers and planetary scientists. The work of these scientists could lead to discoveries that provide further incentive for a human presence in space. Much of this research will use astronomical observations from new generations of telescopes that look not only at visible light but also at non-visible portions of the electromagnetic spectrum* such as infrared* rays, ultraviolet* rays, and x rays* . These space and Moon-based astronomical observatories will be the successors to the Hubble Space Telescope, which has been used to discover planets in distant solar systems. Free of the fog of Earth's atmosphere, the new observatories will be able to peer farther into deep space and allow chemical analysis of the atmospheres of planets in distant solar systems, an important step toward finding remote worlds capable of sustaining life.

The prophecies of dreamers make their way into people's awareness through the mass media. Journalists, authors, screenwriters, and film-makers fall into this category, as do those who work in public relations. Although these are broad fields, they include areas of specialty that are space-related. In addition to this role as messengers of new space developments, the media play a vital role in educating the public about ongoing efforts and gathering support for them.

Following close behind the dreamers are the practitioners, the technical and non-technical workers who turn the dreams into realities. Overseeing the efforts are program managers. These practical thinkers strive to make sensible and affordable compromises and alterations to the dreams. Most of these people work in government and defense jobs because the human presence in space is largely the legacy of competition between the United States and the Soviet Union, and remains a risky and extremely expensive enterprise for many adventuresome nations of the world.

Professions Needed for the Future

Because humans want to establish a long-term future in space rather than continue to make short excursions, the projects that will anchor humankind in space will be more ambitious and costly than any single nation can afford. They will therefore need to span national boundaries and rely on international cooperation and participation by commercial enterprises to provide the necessary funding and talent. Like the extensive dam systems and interstate highway networks in the United States that have been

funded by the government, these international space efforts will probably be large infrastructure* projects, such as launch centers, space stations, and new generations of astronomical observatories.

* infrastructure the physical structures, such as roads and bridges, necessary to the functioning of a complex system

Although early efforts likely will continue to rely on governments and defense departments, in the long run a significant part of this enterprise will probably need to be handled by entrepreneurs who can make the space venture pay its own way and keep it self-sustaining. Such projects will probably depend heavily on the infrastructure built by the international coalition. The mass media will also play a significant role by evaluating the public projects in each country and advertising the products of the private businesses. The teams that will build these projects and populate these companies will include engineers, scientists, medical experts, accountants, lawyers, and astronauts.

Current suggestions for space-based industries include mining the Moon, asteroids, and comets for metal ores, water, and isotopes that are rare on Earth and producing materials at sites where the manufacturing process can benefit from the low-gravity characteristics of space. Each type of industry will call for professionals such as geologists (sometimes referred to as planetary scientists in this setting) and engineers specializing in mining, drilling, and chemistry.

Scientists will continue to research space and near-Earth settings and apply the knowledge gained from those efforts toward making space safer for habitation. Medical experts will determine how to keep bodies and minds healthy during long trips and in the gravitational conditions of space and other worlds. Nutrition scientists will work on making food in space and planetary habitations to avoid having to transport these resources. This will be an important step toward making off-world activities self-sustaining.

Exobiologists—experts on life that could exist beyond Earth—will be needed as people visit planets and moons in the solar system that are capable of supporting some sort of life. The discovery of life in the solar system would be one of the most important events in human history, and this prospect alone is an important incentive to increase the human presence in space.

Business and accounting professions will play a significant role in this effort. These professions include marketing and sales, contract administration, law and licensing, accounting, proposal coordination, and human resources. These professions assure the smooth operation of any endeavor that relies on money and business transactions and will be no less important in space-based efforts. As humankind moves farther from Earth, communications innovators and communications expertise will be at a premium.

There is much work to be done to secure humanity's place in space and on other worlds, and it calls for many types of people. Like the efforts to explore and settle unknown lands, humanity will send out adventurous pioneers and follow them with more ordinary individuals who want to live and work there.

Zubrin, Robert, with Richard Wagner. The Case for Mars: The Plan to Settle the Red Planet and Why We Must. Rev. ed. New York: Free Press, 2011.