Protozoa are a very varied group of single-celled organisms, with more than 50,000 different types represented. The vast majority are microscopic, many measuring less than 1/200 mm, but some, such as the freshwater Spirostomun, may reach 0.17 in (3 mm) in length, large enough to enable it to be seen with the naked eye. Scientists have even discovered some fossil specimens that measured 0.78 in (20 mm) in diameter. Whatever the size, however, protozoans are well-known for their diversity and the fact that they have evolved under so many different conditions. One of the basic requirements of all protozoans is the presence of water, but within this limitation they may live in the sea, in rivers, lakes or even stagnant ponds of freshwater, in the soil and even in some decaying matters. Many are solitary organisms, but some are colonial; some are free-living, others are sessile; and some species are even parasites of plants and animals—from other protozoans to humans. Many of them form complex, exquisite shapes and their beauty is often greatly overlooked on account of their diminutive size.

The cell body is often bounded by a thin pliable membrane, although some sessile forms may have a toughened outer layer formed of cellulose, or even distinct shells formed from a mixture of materials. All the processes of life take place within this cell wall. The inside of the membrane is filled with a fluid-like material called cytoplasm, in which a number of tiny organs float. The most important of these is the nucleus, which is essential for growth and reproduction. Also present are one or more contractile vacuoles, which resemble air bubbles, whose job it is to maintain the correct water balance of the cytoplasm and also to assist with food assimilation. Protozoans living in saltwater do not require contractile vacuoles as the concentration of salts in the cytoplasm is similar to that of seawater and there is therefore no net loss or gain of fluids. Food vacuoles develop whenever food is ingested and shrink as digestion progresses. If too much water enters the cell, these vacuoles swell up, move towards the edge of the cell wall, and release the water through a tiny pore in the membrane.

Some protozoans contain the green pigment chlorophyll more commonly associated with higher plants, and are able to manufacture their own foodstuffs in a similar manner to plants. Others feed by engulfing small particles of plant or animal matter. To assist with capturing prey, items many protozoans have developed an ability to move around. Some, such as Euglena and Trypanosoma are equipped with a single whiplike flagella which, when quickly moved back and forth, pushes the body through the surrounding water body. Other protozoans such as Paramecium have developed large numbers of tiny cilia around the 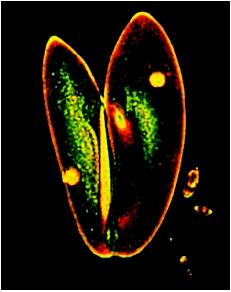 Protozoa. © Eric Grave/Science Source, National Audubon Society Collection/Photo Researchers, Inc. Reproduced by permission. membrane; the rhythmic beat of these hairlike structures propel the cell along and also carry food, such as bacteria, towards the gullet. Still others are capable of changing the shape of their cell wall. The amoeba, for example, is capable of detecting chemicals given off by potential food particles such as diatoms, algae, bacteria, or other protozoa. As the cell wall has no definite shape, the cytoplasm can extrude to form pseudopodia (Greek: pseudes, false; pous, foot) in various sizes and at any point of the cell surface. As the Amoeba approaches its prey, two pseudopodia extend out from the main cell and encircle and engulf the food, which is then slowly digested.

Various forms of reproduction have evolved in this group, one of the simplest involves a splitting of the cell in a process known as binary fission. In species like amoeba, this process takes place over a period of about one hour: the nucleus divides and the two sections drift apart to opposite ends of the cell. The cytoplasm also begins to divide and the cell changes shape to a dumb-bell appearance. Eventually the cell splits giving rise to two identical "daughter" cells which then resume moving and feeding. They, in turn, can divide further in this process known as asexual reproduction, where only one individual is involved.

Some species, which may reproduce asexually, may occasionally reproduce through sexual means, which involves the joining together, or fusion, of the nuclei from two different cells. In the case of paramecium, each individual has two nuclei: a larger macronucleus that is responsible for growth, and a much smaller micronucleus that controls reproduction. When paramecium reproduces by sexual means, two individuals join together in the region of the oral groove—a shallow groove in the cell membrane that opens to the outside. When this has taken place, the macronuclei of each begins to disintegrate, while the micronucleus divides in four. Three of these then degenerate and the remaining nucleus divides once again to produce two micronuclei that are genetically identical. The two cells then exchange one of these nuclei which, on reaching the other individual's micronucleus, fuses to form what is known as a "zygote nucleus." Shortly afterwards, the two cells separate but within each cell a number of other cellular and cytoplasmic divisions will continue to take place, eventually resulting in the production of four daughter cells from each individual.

Protozoans have evolved to live under a great range of environmental conditions. When these conditions are unfavorable, such as when food is scarce, most species are able to enter an inactive phase, where cells become non-motile and secrete a surrounding cyst that prevents desiccation and protects the cell from extreme temperatures. The cysts may also serve as a useful means of dispersal, with cells being borne on the wind or on the feet of animals. Once the cyst reaches a more favorable situation, the outer wall breaks down and the cell resumes normal activity.

Many species are of considerable interest to scientists, not least because of the medical problems that many cause. The tiny Plasmodium protozoan, the cause of malaria in humans, is responsible for hundreds of millions of cases of illness each year, with many deaths occurring in poor countries. This parasite is tra nsferred from a malarial patient to a healthy person by the bite of female mosquitoes of the genus Anopheles. As the mosquito feeds on a victims' blood the parasite passed from its salivary glands into the open wound. From there, they make their way to the liver where they multiply and later enter directly into red blood cells. Here they multiply even further, eventually causing the blood cell to burst and release from six to 36 infectious bodies into the blood plasma. A mosquito feeding on such a patients blood may absorb some of these organisms, allowing the parasite to complete its life cycle and begin the process all over again. The shock of the release of so many parasites into the human blood stream results in a series of chills and fevers—typical symptoms of malaria. Acute cases of malaria may continue for some days or even weeks, and may subside if the body is able to develop an immunity to the disease. Relapses, however, are common and malaria is still a major cause of death in the tropics. Although certain drugs have been developed to protect people from Plasmodium many forms of malaria have now developed, some of which are even immune to the strongest medicines.

While malaria is one of the best known diseases known to be caused by protozoans, a wide range of other equally devastating ailments are also caused by protozoan infections. Amoebic dysentery, for example, is caused by Entamoeba histolytica; African sleeping sickness, which is spread by the bite of the tse-tse fly, is caused by the flagellate protozoan Trypanosoma; a related species T. cruzi causes Chagas' disease in South and Central America; Eimeria causes coccidiosis in rabbits and poultry; and Babesia, spread by ticks, causes red water fever in cattle.

Not all protozoans are parasites however, although this is by far a more specialized life style than that adopted by free-living forms. Several protozoans form a unique, nondestructive, relationship with other species, such as the those found in the intestine of wood-eating termites. Living in the termites' intestines the protozoans are provided with free board and lodgings as they ingest the wood fibers for their own nutrition. In the process of doing so, they also release proteins which can be absorbed by the termite's digestive system, which is otherwise unable to break down the tough cellulose walls of the wood fibers. Through this mutualistic relationship, the termites benefit from a nutritional source that they could otherwise not digest, while the protozoans receive a safe home and steady supply of food.

With such a vast range of species in this phylum, it is not surprising that little is still known about the vast majority of species. Many protozoans serve as an essential food source for a wide range of other animals and are therefore essential for the ecological food webs of higher organisms. Many are also, of course, important for medical purposes, while others are now being used in a range of businesses that include purification of filter and sewage beds. No doubt as further research is undertaken on these minute organisms we shall learn how more of these species might be of assistance, perhaps even in combating some of the major diseases that affect civilization, including those caused by other protozoans.