Bacteria are very small organisms, usually consisting of one cell, that lack chlorophyll (a green pigment found in plants that allows for the production of food). Except for viruses, they are the smallest living things on Earth. Many bacteria are so small that a million of them, laid end-to-end, would measure no more than about five centimeters (two inches). The term bacteria is the plural form of the word bacterium, which represents a single organism.

Bacteria are found everywhere, in the air, soil, water, and inside your body and on your skin. They tend to multiply very rapidly under favorable conditions, forming colonies of millions or even billions of organisms within a space as small as a drop of water.

Today, bacteria are classified in the kingdom Procaryotae. This term refers to the fact that bacteria consist of prokaryotic cells, cells that do not contain a nucleus. (A nucleus is a structure that controls a cell's functions and contains genes. Genes carry the deoxyribonucleic acid [DNA] that determines the characteristics passed on from one generation to the next.) The genetic material of bacteria is contained, instead, within a single, circular chain of DNA.

Bacteria are generally classified into three groups based on their shape. They are described as spherical (coccus), rodlike (bacillus), or spiral orPage 254  |  Top of Article corkscrew (spirochete [pronounced SPY-ruh-keet] or spirilla). Some bacteria also have a shape like that of a comma and are known as vibrio.

Aerobic bacteria: Bacteria that need oxygen in order to live and grow.

Anaerobic bacteria: Bacteria that do not require oxygen in order to live and grow.

Bacillus: A type of bacterium with a rodlike shape.

Capsule: A thick, jelly-like material that surrounds the surface of some bacteria cells.

Coccus: A type of bacterium with a spherical (round) shape.

Fimbriae: Short, hairlike projections that may form on the outer surface of a bacterial cell.

Fission: A form of reproduction in which a single cell divides to form two new cells.

Flagella: Whiplike projections on the surface of bacterial cells that make movement possible.

Pasteurization: A process by which bacteria in food are killed by heating the food to a particular temperature for some given period of time.

Pili: Projections that join pairs of bacteria together, making possible the transfer of genetic material between them.

Prokaryote: A cell that has no distinct nucleus.

Spirilla: A type of bacterium with a spiral shape.

Spirochetes: A type of bacterium with a spiral shape.

Vibrio: A type of bacterium with a comma-like shape.

As the drawing of the anatomy of a typical bacterium shows, the cytoplasm of all bacteria is enclosed within a cell membrane that is itself surrounded by a rigid cell wall. Bacteria also produce a thick, jelly-like material on the surface of the cell wall. When that material forms a distinct outside layer, it is known as a capsule.

Many rod, spiral, and comma-shaped bacteria have whiplike limbs, known as flagella, attached to the outside of their cells. They use these flagella for movement by waving them back and forth. Other bacteria move simply by wiggling their whole cell back and forth. Some bacteria are unable to move at all.

Two other kinds of projections found on bacterial surfaces include fimbriae and pili. Fimbriae (pronounced FIM-bree-ay) are tiny bristles that allow bacteria to attach themselves to other objects or to surfaces. 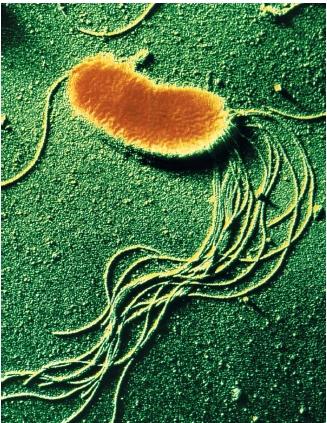 A scanning electron micrograph of the aerobic soil bacterium Pseudomonas fluorescens. The bacterium uses its long, whiplike flagellae to propel itself through the water layer that surrounds soil particles. (Reproduced by permission of Photo Researchers, Inc.)

Pili are tiny whiskers that allow bacterial cells to exchange genetic material with each other.

The term bacterial growth generally refers to the growth of a group of bacteria rather than a single cell. Single cells generally do not get larger in size, so the term growth refers to the reproduction of cells.

Bacteria most commonly reproduce by fission, the process by which a single cell divides to produce two new cells. The process of fission may take anywhere from 15 minutes to 16 hours, depending on the type of bacterium.

A number of factors influence the rate at which bacterial growth occurs, the most important of which are moisture, temperature, and pH. Bacteria 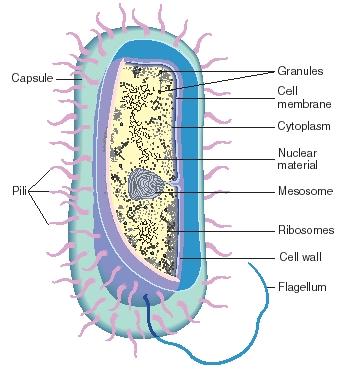 The anatomy of a typical bacterium. (Reproduced by permission of The Gale Group.)

For example, if a bacterial cell is placed in a highly concentrated solution of salt water, water begins to pass out of a cell and into the salt water. The cell begins to shrink and is unable to carry on normal life functions. It cannot grow and will eventually die. On the other hand, an excess of water can be harmful to bacteria also. If water flows into a bacterial cell, the cell begins to swell and may eventually burst, resulting in the death of the cell.

All bacteria have a particular temperature range at which they can survive. For a specific type of bacteria, that range can be very high, very low, or somewhere in between, although it is always a narrow range. Most bacteria thrive at temperatures close to that of the human body (37°C or 98.6°F). But some bacteria prefer cold temperatures as low as freezing (0°C or 32°F), and others require very hot temperatures such as those found in hot springs (50°C to 90°C or 120°F to 200°F). The most extreme conditions in which bacteria have been found are around the hydrothermal vents near the Galapagos Islands. The temperatures near these cracks in the ocean floor is about 350°C (660°F), an environment just right, apparently, for the bacteria that live there.

Another factor affecting bacterial growth is pH, the acidity of a solution. Most bacteria require a pH of 6.7 to 7.5 (slightly more or less acidic than pure water). Other bacteria, however, can survive at a pH more severe than that of battery acid.

Bacteria can also be classified according to the effects they have on human life. Some bacteria are used to supply products that improve human life, others cause disease, while still others have no overall affect at all on human life.

Helpful bacteria. Bacteria make possible the digestion of foods in many kinds of animals. Cows, deer, sheep, and other ruminants, forPage 258  |  Top of Article example, have a large organ known as the rumen in which bacteria live and help break down cellulose fibers and other tough plant materials. In humans, bacteria known as Escherichia coli (E. coli) occur everywhere in the digestive system, aiding in the breakdown of many kinds of foods. Bacteria are also responsible for the production of vitamin K and certain B vitamins.

Certain kinds of bacteria are also essential in the decay and decomposition of waste materials. Such bacteria are known as decomposers. Decomposers attack dead materials and break them down into simpler forms that can be used as nutrients by plants.

Harmful bacteria. It seems likely, however, that most people know bacteria best because of the diseases they cause. Some of these diseases are produced when bacteria attack directly the tissues in a plant or animal. For example, fruits and vegetables that become discolored as they are growing may be under attack by bacteria.

Bacteria also attack organisms by releasing chemicals that are poisonous to plants and animals. Such poisons are known as toxins. A familiar toxin-producing bacterium is Clostridium tetani, responsible for the disease known as tetanus. Tetanus is a condition in which one's muscles are paralyzed, explaining its common name of lockjaw. A related bacterium, Clostridium botulinum, releases a toxin that causes the most severe form of food poisoning, botulism.

Some forms of dangerous bacteria live on the human skin, but cause no harm unless they are able to enter the blood stream through a break in the skin. Among these bacteria is Staphylococcus, responsible for the potentially fatal toxic shock syndrome. And although E. coli is helpful within the digestive system, if it is ingested and enters the bloodstream it causes severe cramping, diarrhea, and possibly even death.

Most forms of food preservation, such as freezing and drying, are designed to kill or inactivate bacteria that would otherwise damage food or cause disease. One of the most common methods of destroying bacteria in foods is pasteurization. Pasteurization is the process of heating a food product to a particular temperature for some given period of time. The temperature and time are selected to be sure that all bacteria in the food are killed by the process. The pasteurization of milk has made it possible to insure safe supplies of one of the most popular of all human foods.

In October 2000, a team of biologists claimed to have revived a bacterium that existed 250 million years ago, well before the age of the dinosaurs. They found the bacterium in a drop of fluid trapped in a crystal of rock salt that had been excavated from an air duct supplying a radioactive waste dump 1,850 feet (564 meters) below Earth's surface near Carlsbad, New Mexico. When the biologists drilled into the pocket of fluid in the crystal and mixed nutrients with the fluid, bacteria soon appeared. However, other scientists quickly suggested that the bacteria that grew was simply modern bacteria that had infected the crystal sample. The questioning scientists also pointed out that it would be impossible for the bacterium's DNA (a complex molecule that stores and transmits genetic information) to have survived more than a few thousand years, at best.

Regardless of the debate, bacteria have been around since the dawn of life on Earth, and they have continued to evolve. A major problem facing the medical community today is the ability of disease-causing bacteria to develop a resistance to antibiotics and other antibacterial drugs. These types of bacteria have been able to change their forms or have even been able to secrete enzymes that destroy the antibiotics. Since the 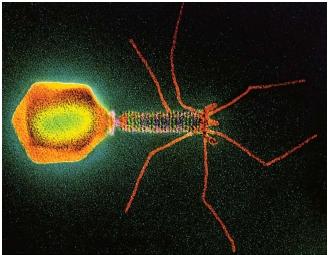 A scanning electron micrograph of a T4 bacteriophage virus. (Reproduced by permission of Photo Researchers, Inc.)

development and use of antibiotics in the 1940s, most known bacterial diseases have developed a resistance to at least one type of antibiotic.