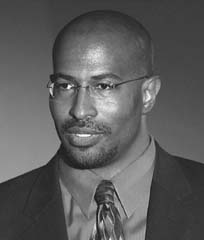 Van Jones is a social activist whose work to combine job creation with "green" initiatives in the San Francisco Bay area has served as a model for urban renewal programs throughout the country. An active proponent of police reform and human rights issues, Jones is also credited with bringing the environmental movement—a cause usually associated with white, middle-class advocates—to urban centers, where chronic unemployment and crime are often considered more pressing concerns than pollution. "Too often we have said: ‘We are overwhelmed with violence, bad housing, failing schools, excessive incarceration, poor healthcare and joblessness. We can't afford to worry about spotted owls, redwood trees and polar bears,’" he wrote in ColorLines in 2007. "But Hurricane Katrina and its aftermath taught us that the coming ecological disasters will hit the poor first and worst."

Jones, the son of two teachers, was born in 1968 and grew up in Jackson, Tennessee. He studied journalism and political science at the University of Tennessee in Martin and, after graduating with a degree in communications in 1990, went on to Yale University Law School. Already active in raising awareness about campus racial and administration issues, Jones was spurred to activism in the spring of 1992, when riots erupted in Los Angeles following the acquittal of white police officers charged with brutally beating black motorist Rodney King. Jones was working as an intern for a civil-rights attorney in San Francisco at the time; he returned to the Bay Area permanently after earning his law degree in 1993.

Police brutality was the focus of his earliest efforts. In 1995 he founded Bay Area Police-Watch. Every day his office fielded as many as twenty complaints from area residents who believed they had been victims of unlawful behavior by police officers in San Francisco, Oakland, and other nearby communities. In 1997 the organization was instrumental in the firing of San Francisco police officer Marc Andaya. Jones had already compiled a long list of complaints against Andaya when a suspect named Aaron Williams died after being arrested by Andaya and other officers in 1995. Witnesses testified that Andaya kicked Williams in the head after he had subdued him with pepper spray; the coroner ruled, however, that Williams's death was attributable to the cocaine in his system. When the charges against Andaya were dismissed, community protests ensued, Page 91  |  Top of Article and Jones's group helped publicize other incidents, such as the time Andaya choked a suspect who was already in handcuffs. In the end, the San Francisco Police Commission fired Andaya. As a result of his advocacy work, Jones was granted a Next Generation Leadership Fellowship from the Rockefeller Foundation and won a Reebok Human Rights Award.

In 1996 he cofounded the Ella Baker Center for Human Rights, which was named after the longtime civil rights activist who pressured the national Democratic Party leadership to take a firmer stand against racial discrimination both in the South and within the party. The Baker Center's first effort was the creation of a Green Job Corps in Oakland. The state of California, which had been a leader in progressive environmental laws since the 1970s, had passed legislation requiring that both new construction and existing structures adhere to strict energy-efficiency standards. Under the law, older buildings had to be weather-proofed, retrofitted with solar panels, or renovated in other ways. Jones worked with both the Oakland city government, which provided $250,000 in start-up funding, and the local electricians' union to train unemployed residents to do these jobs. There was potential for steady work because the jobs could not be outsourced. "You can't take a building you want to weatherize, put it on a ship to China and then have them do it and send it back," Jones told Thomas L. Friedman in the New York Times. "Those green-collar jobs can provide a pathway out of poverty for someone who has not gone to college."

In 2007 Jones founded Green For All, an organization that works on a national level to train unemployed urban residents for jobs in the renewable-energy and retrofitting sector. As its founding president, Jones joined forces with Democratic Representative Nancy Pelosi, who later became Speaker of the House, to get $1 billion in federal funding to create 250,000 new jobs by 2012. Jones explained the practicality of such expenditures in a Forbes article in 2006. Federal and state governments were already spending nearly $35 billion annually for prisons and jails, he noted, and many of those dollars went to private companies that received government contracts to build or manage incarceration facilities. For those companies to earn profits, Jones pointed out, they had to keep the jails full—in other words, the companies had little financial incentive to rehabilitate prisoners. Noting that 57 percent of parolees in California end up back in prison, Jones asserted that "the system is so broken that the very people we entrust to rehabilitate prisoners actually profit from prolonged prisoner stays and quick prisoner returns."

Jones's adopted hometown of Oakland has been the starting point for several significant social-justice movements that later spurred change at the national level, including early labor union organizing and minority political participation based on the work of the Black Panthers, a militant group active in the city during the 1960s. Jones has been hailed as a pioneer for merging environmental issues with efforts to solve such urban problems as neighborhood decay, job loss, and poverty. For many years the green movement was viewed as a concern primarily of the affluent and college-educated. However, as Jones explained to writer Alwin Jones in Black Enterprise, "green values are very consistent with African and indigenous values in the first place. Western society is coming back around to values that were and are a part of our core, our heritage, our history. We shouldn't think about it as jumping on a white bandwagon because it's our bandwagon in the first place."