Some anthropologists believe that the first Native peoples migrated to Alaska 30,000 to 12,000 years ago during the Ice Age that lowered sea levels and created a land bridge across the Bering Strait. These hunter-gatherers, ancestors of modern-day Indian peoples, were followed by the Inuit and Aleut peoples, who arrived by boat starting around 8,000 years ago, after the disappearance of the land bridge. There are, however, other theories that dispute this. Today, about 15 percent of Alaska’s population claims Native descent. The Inuit or Eskimo include the Inupiat, Alutiiq, Aleut, Yup’ik, while the Indians include the Tsimshian, Athabaskan, Eyak, Tlingit, and Haida. While the term “Eskimo” (“eaters of raw meat” in Athabaskan) is generally not considered offensive in Alaska, Native Alaskans usually refer to themselves as members of a particular group, or collectively as Natives.

Athabaskan family with pelts from the winter catch

Historically, the Athabaskans occupied the vast taiga forests of the Interior, which are characterized by a harsh climate. Largely a hunting and gathering society, the Athabaskans spent summers in riverside tent camps, collecting and drying fish and game for the cold season. In winter, they lived in houses made of sod and wood. Their clothing was made primarily of caribou or moose hide, colorfully decorated with porcupine quills and, after the arrival of the Europeans, with traded goods such as beads. Modern Athabaskans live mainly in the Interior, many in Fairbanks, where they enjoy an urban lifestyle but also make efforts to demonstrate their traditional ways to visitors.

Alaska’s Tlingit (pronounced KLINK-it), a Northwest Coast culture, have long inhabited Southeast Alaska. Historically, the Tlingit were a seafaring people, and their traders traveled as far as present-day Washington State in huge ocean-going canoes hewn from single cedar logs. Traditional Tlingit society had no central government, but each village had a stratified society that included high-ranking families, commoners, and slaves captured from neigh boring tribes. Like the Haida, Tsimshian, and other Northwest Coast cultures, the Tlingit carved totem poles (see p129 ) to commemorate the culture unique to their respective clans. Pole-raisings and memorial ceremonies were accompanied by grand feasts called potlatches. Currently, the art of totem carving is re-emerging across Southeast Alaska, and other Tlingit arts are enjoying widespread popularity.

The Haida share many cultural traditions with the Tlingit, including clan structures and totem pole carving. Expert sailors, they were known for their decorative ceremonial canoes. They traditionally depended on salmon and sea mammals for their subsistence. In the late 19th century, as many as 10,000 Haida lived in far southern Alaska, but by the 1890s, their numbers had been decimated by diseases brought in by Western explorers. Today, the Alaskan Haida population is about 2,000, but many more claim partial Haida descent. While they are now centered on Hydaburg on Prince of Wales Island, people of Haida descent live across southern Alaska.

Haida man in a bark hat and button cloak

Alaska’s Tsimshian are descendants of 823 people who left Canada with Anglican missionary, Father Duncan, after local authorities denied their land claims. Settling in an abandoned Tlingit settlement on Annette Island, which they named Metlakatla after their village in British Columbia, they set up a model Protestant Christian community of white houses and well-appointed churches. The Tsimshian were the only Alaskan Native group that rejected the Alaska Native Claims Settlement Act of 1971 (see p56 ). As a result, they are the only Native group to retain sovereignty over their land, with Annette Island being Alaska’s only official Indian Reservation. 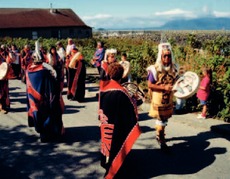 Tsimshian drummers at a ceremony

The Inupiat (plural Inupiaq) mainly occupy areas along the Arctic Ocean coast and on the North Slope. Prior to European contact and influence, distinct Inupiat groups of extended families occupied home territories between Norton Sound on the Bering Strait and the Canadian border. Some groups were settled, but others traveled great distances to cooperatively hunt seals, whales, caribou, and other game animals. The Inupiat had no chiefs, but each family was headed by an umialik, who managed food and other family needs. Women were responsible for gathering plants and berries, skinning animals, drying muktuk (whale blubber), meat, and fish, and preparing food. While conflicts existed between groups, peaceful interaction did occur, especially during trade fairs at the end of each hunting season, which drew participants from as far away as Siberia. While some Inupiat today work for Native corporations or government agencies, many rural residents still make a livelihood from subsistence hunting, fishing, and gathering.

The Yup’ik traditionally lived on the broad, marshy plains of the Yukon-Kuskokwim Delta, as well as on the Bering Sea coast and parts of the Seward Peninsula. Due to the milder and more vegetated environment, the Yup’ik made more use of wood, vegetables, and land animals than the Inupiat. With summer hunting camps, they also had permanent villages, where men lived in qasgiqs, or communal houses, and women and children in sod dwellings called enet. Lacking the resources Europeans wanted, the Yup’ik first encountered Westerners much later than the Aleut, Alutiiq, and Inupiat. In recent years, many Yup’ik have moved to towns, especially Bethel, but some still practice subsistence hunting or spend the summers working in family fish camps.

Yup’ik family beneath an umiaq, a traditional skin boat

Both the Aleut and Alutiiq live in Southwest Alaska, the former in the Aleutian Islands and the latter from Prince William Sound to Kodiak Island and the Alaska Peninsula. The difference in their languages, how ever, suggests that they have entirely separate origins. Despite Southwest Alaska’s stormy climate, both groups had a maritime hunting culture, using baidarkas (skin boats) to chase seals, otters, and whales. Early Russian otter hunters often killed or enslaved them and also introduced foreign diseases. The Russian Orthodox clergy that followed converted large num bers to the church, which remains a strong spiritual force for both groups. During World War II, entire villages were transferred to evacuation centers in Southeast Alaska to keep them from being taken prisoner by the Japanese. Aleut people often prefer the name Unangaxˆ and Alutiiq call themselves Sugpiaq.

Alutiiq woman in a beaded headdress