THANKSGIVING. The classic representation of Thanksgiving—a crowded dinner table set in the open air on a golden autumnal afternoon in Plymouth Colony, 1621—might include some anachronisms such as apples, potatoes, corn-on-the-cob, and cranberry sauce, but the gathered Pilgrims and their Wampanoag Indian guests are sure to have one of the "great store of wild turkeys" if not the geese, ducks, and venison that founded the historic feast, bowls of assorted root vegetables, and pumpkin pies. It is an idyllic scene, but it has nothing to do with how the Thanksgiving holiday historically began in America.

There never was a true "first" American Thanksgiving from which all subsequent celebrations derived. Thanksgiving did not originate in America at all, but arrived with the intellectual baggage of New England's Puritan colonists. Having banished the medieval roster of holidays including Christmas and saint's days, the reformers admitted only three holy days: the Sabbath, fast days, and Thanksgivings. Fasts and Thanksgivings subsequently Page 395  |  Top of Article appeared independently in each of the New England colonies (except Rhode Island). Each was like an extra Sabbath during the week, requiring church attendance and sober activity, but a big dinner following the meeting was customary on days of thanksgiving and praise. Eventually, fast days were relegated to the spring (when there was nothing to eat) to petition God for a successful season, while autumnal Thanksgivings celebrated the cumulative blessings of the year, including the fruits of the harvest.

As Puritans metamorphosed into Yankees, the social and gustatory character of the day overtook and then equaled the religious observation in consequence. The preparation for the feast began weeks before with Sunday readings of the governor's proclamation. Apples, spices, suet and lean beef were chopped for mincemeat. Massive numbers of pies and tarts were baked of mince, pumpkin, apple, cranberry, and other fillings, intended to last well beyond the holiday. Livestock and fowl were slaughtered and prepared for the spit, pot, or chicken pie (which might take six birds, bones and all). The requisite turkey was gotten from the barnyard, market, or turkey shoot where poor shots underwrote the costs of better marksmen. Charity was an important holiday element. Food supplies, unprepared (including flour, rice, sugar, and even turkeys) or cooked, were given to the poor by prosperous families and sent to prisons by town officials.

As Thanksgiving approached, family and friends assembled at the patriarchal homesteads. Thanksgiving balls were very popular, and women made sure that their clothes were the best and newest possible, despite grumbling about impious frivolity among the more devout. On the day itself, the more respectable attended morning service in the meetinghouse, before returning for the customary feast prepared by the women and servants of the household. The significators of a true New England Thanksgiving dinner were firmly established by the time of the American Revolution: the all-important turkey in place of honor, the massive chicken pie flanked by ducks, geese, and cuts of "butcher's meat," plum pudding, bowls of vegetable and fruit "sass" (sauce), and of course the pies. Following the dinner, the company might relax around the fire with wine or cider, dried fruits, and nuts to play games, tell stories, or in more pious households, to continue their religious exercises in the private sphere and welcome the minister's evening call. Alternately, sleighing visits to other households were popular, as were dances and weddings.

Even before 1800, many households got their holiday foodstuffs not from the family farmstead but in the marketplace. The food was processed, prepared, and served by the housewife to as many family, friends, and dependents as could be accommodated. Later, the emphasis shifted to kin rather than community, but the classic Thanksgiving bill of fare, based on what was available in November in colonial New England, remained sacrosanct. 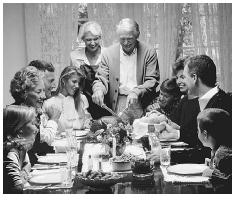 Thanksgiving dinner is one of the most important occasions for American families of all faiths and ethnic backgrounds to come together and enjoy a large home-cooked meal. © STEVE CHENN/CORBIS.
Over the years the ideal of a home-prepared meal and informal family gathering has sent generations of women seeking the advice of experts from Catherine Beecher to Martha Stewart. Regional and ethnic variations were allowed, but the iconic turkey, cranberry sauce, and pumpkin (or squash) pie consecrated all true Thanksgiving meals.

The first of ten national Thanksgivings was declared by the Continental Congress in 1777. After 1815, there were no further presidential proclamations despite annual editorial pleadings by Mrs. Hale in Godey's Magazine, but the popularity of the holiday grew apace. By the 1850s, Thanksgiving was celebrated in almost every state and territory, its national character assured. Abraham Lincoln declared two Thanksgivings in 1863, the second in November being the first of our modern national holidays, but it was not until 1941 after Roosevelt fiddled with the date with an eye to Christmas sales that Congress established the fourth Thursday as a legal holiday. Aside from packaged versions of traditional foods, expenses associated with holiday travel, and a moderate amount of decorative kitsch, the holiday also escaped the exploitive commercialism of other American holidays. Restaurants take advantage of the holiday to sell turkey dinners, and those dedicated purveyors of classic Thanksgiving fare, the armed services, do their best, but Thanksgiving retains its strongly domestic focus.

In light of their modern importance as the symbols of the holiday, it might be asked. "What about the Pilgrims?" The fact is that the famous description of the 1621 harvest festival in Mourt's Relation had been entirely forgotten before being rediscovered in 1822 and identified as the "First Thanksgiving" by Alexander Young in 1841. Page 396  |  Top of Article No one had associated the Plymouth colonists and Indian guests with the holiday before. However, in 1841 the event resembled contemporary Thanksgivings, even if it had not been so regarded by the original participants. The concept took time to catch on, as the Pilgrims had other symbolic burdens to bear, and Thanksgiving still implied family reunions, turkeys, and Yankee homesteads to most people. It wasn't until a fictional account appeared in the bestselling Standish of Standish (1889) that the Plymouth association gained widespread popularity, and only after World War II did the Pilgrims become the primary significators of the holiday.

[Abbott, Jacob.] New England and Her Institutions by One of Her Sons. Boston: John Allen, 1835.

Young, Alexander. Chronicles of the First Planters of the Colony of Massachusetts Bay. Boston: Little, Brown, 1846.