Various Spanish, French Huguenot, and English explorers and settlers in North America fell to their knees and gave thanks or proclaimed special days of thanksgiving in the late 1500s or early 1600s. Probably the earliest of these acts of thanksgiving was that of Ponce de Leon when he landed in Florida during Easter of 1513. "The first thanksgiving," as a Pilgrim feast in 1621 subsequently came to be known, was not a religious celebration. Instead, the Pilgrims held a three-day feast to celebrate the success of their first harvest sometime between September and early October in 1621. Their event resembled the English "harvest home" custom, a somewhat raucous, entirely secular harvest festival lacking any prayer services.

Fanciful portraits of Pilgrims seated at tables with their Indian guests have given false impressions about the nature of that first thanksgiving. It did include athletic contests, a military drill, and so many Native American guests that they outnumbered their Pilgrim hosts almost two to one. Roast duck, goose, and venison were served, and these items were probably washed down with beer. Whether the assembled also ate turkey is a matter of dispute. The Pilgrims had no harvest home celebration in 1621 or 1622, and held only sporadic ones after that. Thereafter individuals, churches, or colony-wide governments called for days of thanksgiving, largely on an ad hoc basis. The settlers of Plymouth Colony came to acquire their reputation as the national ancestors only in the 1760s. At that time, a group of Plymouth men formed a small local club to celebrate the day in December when the Pilgrims landed, which they deemed the most important way to commemorate the Pilgrims. Landing Day, also called Forefathers' Day, came to include a public feast, oratory, sermons, and fireworks. But it remained a public holiday and thus never developed the familial appeal of Thanksgiving.

The idea of Thanksgiving as a time for a family feast at first coexisted and then overwhelmed the public definition of the day provided in Forefathers' Day. (There was a brief revival of Forefathers' Day in the 1880s and 1890s, when members of the Society of Mayflower Descendants and other elite groups appropriated the day as an event to demonstrate their Anglo-Protestant/American ancestry.) The ideal of Thanksgiving as a family homecoming emerged in tandem with the cult of domesticity of the early nineteenth century. In this cult, the home became a secular shrine, and living adult children were urged to visit their elderly parents to enjoy a special home-cooked feast. Returning home to one's family in the countryside represented Page 355  |  Top of Article a way for city people to rediscover the simplicity and rural virtue they had left behind.

Never simply a holiday about the ideal of the family, Thanksgiving was also supposed to celebrate charitableness and national unity. New England writer Sarah Josepha Hale sang the praises of the New England Thanksgiving in her 1827 novel, Northwood. She became editor of a woman's magazine, Godey's Lady's Book, and wrote yearly editorials in favor of a national holiday; she also published holiday recipes. In 1846, Hale began writing to governors, presidents, and missionaries, calling for a national day of Thanksgiving. As sectionalism over the Civil War identified the holiday with the North—abolitionist Protestant ministers even delivered sermons on the day—Hale countered by presenting Thanksgiving as a means of preventing war and a celebration of shared American values.

Presenting Thanksgiving as part of America's shared past was not a new idea, as it had occurred as early as the American Revolution. The Continental Congress had proclaimed thanksgiving days during the Revolutionary War, and three American presidents—George Washington, John Adams, and James Madison—also called for them. However, Presidents John Quincy Adams and Thomas Jefferson considered the Thanksgiving a religious day, which violated constitutional provisions for the separation of church and state. Subsequent presidents (until Abraham Lincoln in 1863) accepted this view. Both sides in the Civil War called for days of thanksgiving to celebrate their military victories. In September 1863, Hale wrote to Lincoln urging him to proclaim a national Thanksgiving Day. The victory at Gettysburg as well as Hale's entreaties encouraged Lincoln to declare a national day of Thanksgiving that November. In l863, Lincoln proclaimed the last Thursday in November a national day of thanksgiving and prayer. Ever since then presidents have issued such proclamations.

While states still had the power to decide their holidays, by the late nineteenth century most states had made Thanksgiving a legal holiday. Even so, Thanksgiving was mainly celebrated among the middle and upper classes, in New England and the mid-Atlantic states, and among Protestants. The Catholic Church opposed the holiday as a Protestant rite as late as the 1880s. African Americans tended to celebrate the holiday as a religious day, often giving thanks for emancipation.

There was a sporting tradition on Thanksgiving, since the English harvest home had been celebrated with sporting contests and hunting. Baseball games were commonly played on Thanksgiving in the 1860s and 1870s. The Thanksgiving Day football game began in the 1870s, as the culminating contest in the Ivy League football season. In 1876, four Ivy League schools established the Intercollegiate Football Association and scheduled the first championship game on Thanksgiving Day. Initially, football played on Thanksgiving was seen as a desecration of the religious and national meanings of the day. Ministers and college presidents failed in their efforts to put a stop to football on Thanksgiving. By the 1920s, football had become a form of home entertainment, mainly for the urban middle class who owned radios. By 1956, football games were televised, reinforcing the association between watching football and a festival celebrated in the home.

There had been parades on Thanksgiving since the late nineteenth century, and department stores sponsored Thanksgiving Day parades as early as 1920. Macy's Thanksgiving parade in Manhattan began in 1924. It was deliberately staged as a means of inaugurating the Christmas shopping season. The Macy's parade, like the introduction of football on Thanksgiving, was initially greeted with some consternation. Some patriotic groups protested because the Macy's parade had no national meaning and was held at the same time as morning church services. Macy's moved the parade to the afternoon, where it conflicted with football games. Organizers then decided to hold the parade in the morning, since they perceived greater conflict with football than with church services. In 1927 a puppeteer created the first giant balloons for the parade, thus adding color and overwhelming size to the pageant. The parade was canceled during World War II because of national rationing of helium and rubber. Hollywood enhanced the visibility of the parade in 1947 with the release of the film Miracle on 34th Street. In the film, Macy's parade and the endearing Santa Claus that participates in it contributed to the Dickensian definition of Christmas as a time of magic and goodness. A product placement for the store and its parade, the film opened with footage of the real parade.

The desire to revive the faltering economy during the Great Depression led to an ill-starred attempt to advance the date for Thanksgiving and provoked a lasting congressional response. In 1933, the National Retail Dry Goods Association urged President Franklin D. Roosevelt to proclaim Thanksgiving the third Thursday in November in order lengthen the Christmas shopping season. Roosevelt initially thought the calendric change would prove confusing, but he acceded to these requests in 1939. His proclamation affected only federal employees and the District of Columbia. Many state governors followed Roosevelt's lead, while others kept to tradition and a few Page 356  |  Top of Article 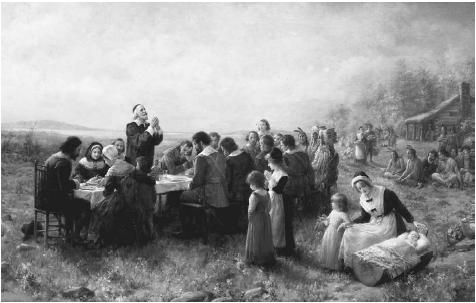 The First Thanksgiving at Plymouth, Massachusetts. An oil on canvas painting by Jennie Augusta Brownscombe (1850–1936) in 1914, The First Thanksgiving at Plymouth, Massachusetts depicts the peaceful gathering of the English settlers and Native Americans. © The Granger Collection Ltd.
proclaimed two Thanksgivings in November. Roosevelt's decision was highly unpopular, however. In 1941, Congress responded to popular outcry by changing the date for the observance of Thanksgiving to the last Thursday of November and passing legislation making Thanksgiving a national legal holiday. Wartime unity and congressional action during war no doubt contributed to this triumph of federalism.

Thanksgiving is often beloved as America's least commercialized holiday. Actually, Thanksgiving was a minor gift-giving occasion in the early nineteenth century. By the 1850s, advertisers were selling gift books of Thanksgiving. Greeting cards, paper goods, candies, flowers, restaurant meals, and travel packages have been and are now marketed on Thanksgiving. Since the early twentieth century, newspapers and magazines carry Thanksgiving ads. In the Thanksgiving edition of the Saturday Evening Post for 1931, an advertisement for Camels touted the holiday as "something to be thankful for." Nonetheless, all of these commercial signs are ignored since the looming presence of Christmas makes the somewhat commercial Thanksgiving appear to be the simple, homespun holiday Hale promoted.

Pleck, Elizabeth H. "The Making of the Domestic Occasion: The History of Thanksgiving in the United States." Journal of Social History 32 (1999): 773–790.