Jalal al-Din Akbar was born in 948/1542 as his father Humayun fled India before the forces of the Afghan warlord Sher Shah Sur. After thirteen years of exile, his father returned to rule India, but within a matter of months died in a fall. Akbar came to the throne at the age of thirteen in 963/1556. He ruled until his own death in 1014/1605.

Akbar's reputation as the true founder of the Mughal empire rests partly on his own reign of fifty years and partly on the writings of Abu al-Fazl, a loyal companion who was Akbar's ardent supporter. Abu al-Fazl's Aʾin-i Akbari and Akbarnamah presented the image of Akbar as a political genius. Abu al-Fazl saw Akbar as the “perfect man” (Insan-i kamil) of Sufi lore: a master of both the temporal and spiritual realms. He, therefore, inflated Akbar's reputation whenever possible.

In practical terms, Akbar adopted some of the administrative practices of the defeated Sher Shah. As the influence of his grandfather's and father's aging courtiers declined, Akbar was free to recruit a new corps of advisers, like Abu al-Fazl. These advisers depended on his patronage for their own status. During Akbar's reign, India saw an influx of silver bullion as European traders began massive purchases of Indian cloth. Because of the cash nexus created by increased commerce, Akbar was able to manage a system in which officials received salaries either directly from the imperial treasury or through assignments of the government's revenue allotment from the capital of the province for specific districts. The central authority gained an unprecedented degree of control over state officials. Akbar's reputation was further enhanced as the British came to rule India. They saw him as a model for their own style of rule: religiously neutral, but strict in his assertion of central power. 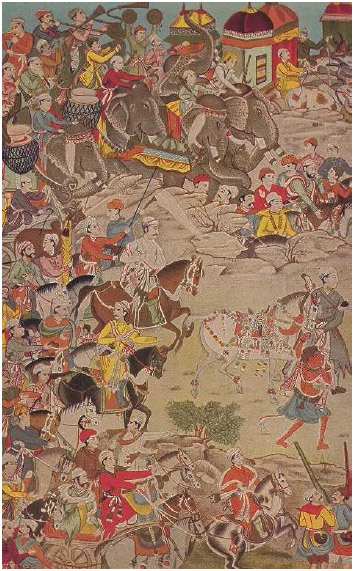