From November 1945 until October 1946, U.S., British, French, and Soviet judges of the International Military Tribunal (IMT) conducted a series of military trials of 24 Nazi war criminals in Nuremberg, Germany. The Trial of the Major War Criminals, or Nuremberg Trials, resulted in the conviction of senior Nazi military and political leaders. Following the IMT Nuremberg Trials, a U.S. military tribunal conducted further trials of lesser ranking Nazi members in a series of 12 separate trials, known as the Subsequent Nuremberg Trials. Between December 1946 and August 1947, the U.S. military tribunal conducted the Doctors' Trial, a trial of 23 defendants, including 20 physicians, accused of murder and torture in the conduction of human experiments.

Telford Taylor (1908–1998), the chief prosecutor, stated during his opening statement that the Doctors' Trial was “no mere murder trial,” because most of the accused were physicians who had sworn to follow the Hippocratic Oath, including its provision not to harm patients. After hearing testimony from 85 witnesses and reviewing nearly 1,500 documents, the tribunal convicted 16 defendants. The evidence highlighted the role of the physicians in conducting human experiments on people held in concentration camps and the mass murder of between 70,000 and 275,000 physically or mentally handicapped people under Nazi Germany's eugenicsbased euthanasia program, Action T4. The tribunal sentenced seven defendants to death and sentenced the other nine convicted defendants to prison terms ranging from 10 years to life.

Prior to the Doctors' Trial, no country had a code of ethics for medical professions conducting human medical experiments. The American Medical Association (AMA), however, adopted the Principles of Ethics Concerning Experimentation with Human Beings in December 1946, which coincided with the opening of the Doctors' Trial. The AMA's code was discussed during the Doctors' Trial, and many of its ideals are reflected in the Nuremberg Code.

One of the central themes of the Doctors' Trial was the relevance of the Hippocratic Oath and whether the Hippocratic Oath alone could guide medical ethics during human medical experimentation. Under the traditional doctor-patient relationship, the patient initiates the relationship with the physician, and then trusts that the physician will act in the patient's best interest. The physician is expected to fulfill his or her oath to do no harm to the patient. The judges at the Doctors' Trial noted that human medical experimentation falls outside of this traditional doctor-patient relationship. During human experimentation, the physician's primary goal is to conduct tests and obtain results that may be used to advance medical science.

EUTHANASIA: The painless killing of a patient suffering from an incurable disease or condition.

INFORMED CONSENT: Permission granted by the subject of a medical procedure or clinical trial after the individual has been apprised of all potential benefits and risks. 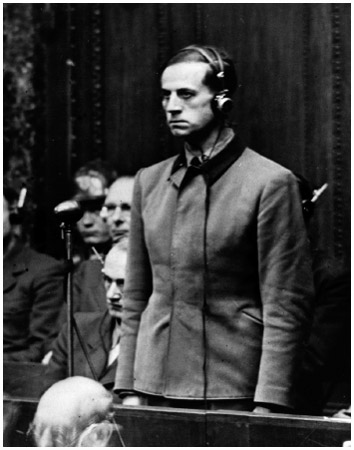 One of the principle defendants of the Nuremberg Trials, Karl Brandt, was the personal doctor of Adolf Hitler. He listens to the proclamation of his verdict at the Doctors' Trial. Brandt was sentenced to death by hanging and was executed June 2, 1948, at Landsberg prison in Bavaria. The Doctors' Trial considered the fate of 23 German defendants, 20 of whom were physicians who either participated in the Nazi program to euthanize persons or who conducted experiments on concentration camp prisoners without their consent. Sixteen of the doctors charged were found guilty and seven were executed. The Nuremberg Code was developed after the trial in response to human research without consent. © Popperfoto/Getty Images.

Noting the failings of traditional Hippocratic ethics in human medical experimentation, the judges at the Doctors' Trial asserted that a new code of medical ethics should be adopted to address the unique concerns presented by human experimentation. Relying heavily on the AMA's code of ethics and a model medical research code submitted to the tribunal by Dr. Leo Alexander (1905–1985), the judges included a 10-point code of ethics for human experimentation in their verdict, which became known as the Nuremberg Code.

Although no country or medical association has adopted the Nuremberg Code in its entirety, the Nuremberg Code has had a tremendous influence on the development of human rights related to medical research. Its informed consent requirement has become adopted by most medical associations' codes of conduct and has become enshrined in the laws and regulations on many nations. The World Health Organization (WHO) also adopted the Nuremberg Code's informed consent provision in its International Ethical Guidelines for Biomedical Research Involving Human Subjects. 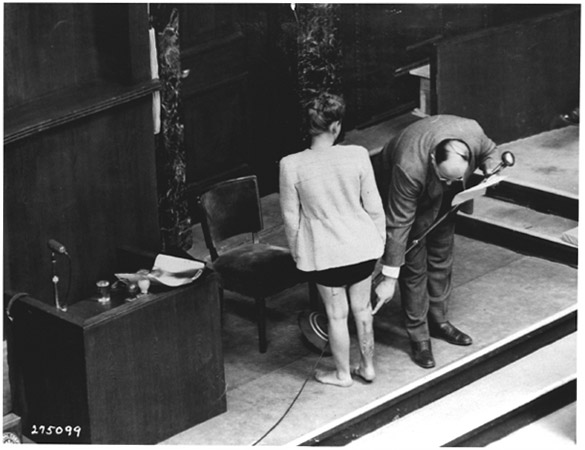 Polish concentration camp survivor Jadwiga Dzido and Dr. Leo Alexander show the scar on her right leg during the Doctors' Trial portion of the Nuremberg Trials of the Nazis in Nuremberg, Germany, December 22, 1946. The injury was caused by a medical experiment on sulphonamide drugs in the Ravensbruck concentration camp. Nazi doctors made incisions in her leg, infected it with bacteria from dirt and slivers of glass then treated her with drugs. Many died during such experiments. © U.S. Holocaust Memorial Museum Photo Archives.

crime. These principles were created as a result of the Nuremberg trials at the end of World War II to address such topics as individual consent and coercion. Attention is given to differentiation between legitimate medical research and illegal experiments on human subjects. The guidelines were documented per the Trials of War Criminals before the Nuremberg Military Tribunals under Control Council Law by the Government Printing Office in Washington, D.C., in 1949.

1. The voluntary consent of the human subject is absolutely essential. This means that the person involved should have legal capacity to give consent; should be so situated as to be able to exercise free power of choice, without the intervention of any element of force, fraud, deceit, duress, overreaching, or other ulterior form of constraint or coercion; and should have sufficient knowledge and comprehension of the elements of the subject matter involved as to enable him to make an understanding and enlightened decision. This latter element requires that before the acceptance of an affirmative decision by the experimental subject there should be made known to him the nature, duration, and purpose of the experiment; the method and means by which it is to be conducted; all inconveniences and hazards reasonable to be expected; and the effects upon his health or person which may possibly come from his participation in the experiment.

2. The experiment should be such as to yield fruitful results for the good of society, unprocurable by other methods or means of study, and not random and unnecessary in nature.

3. The experiment should be so designed and based on the results of animal experimentation and knowledge of the natural history of the disease or other problem under study that the anticipated results will justify the performance of the experiment.

4. The experiment should be so conducted as to avoid all unnecessary physical and mental suffering and injury.

5. No experiment should be conducted where there is an a priori reason to believe that death or disabling injury will occur; except, perhaps, in those experiments where the experimental physicians also serve as subjects.

6. The degree of risk to be taken should never exceed that determined by the humanitarian importance of the problem to be solved by the experiment.

7. Proper preparations should be made and adequate facilities provided to protect the experimental subject against even remote possibilities of injury, diesability, or death.

10. During the course of the experiment the scientist in charge must be prepared to terminate the experiment at any stage, if he has probable cause to believe, in the exercise of the good faith, superior skill and careful judgment required of him that a continuation of the experiment is likely to result in injury, disability, or death to the experimental subject.