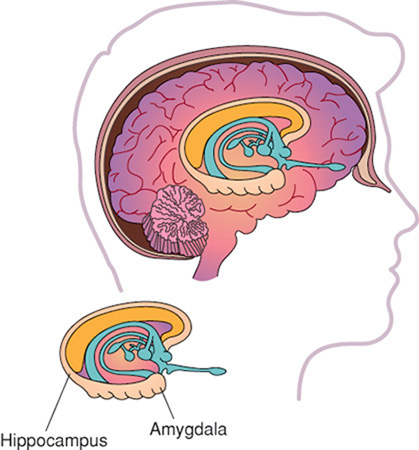 Memory loss may result from bilateral damage to the limbic system of the brain responsible for memory storage, processing, and recall.
Illustration by Electronic Illustrators Group. © Cengage Learning®.

The overall incidence of amnestic disorders is difficult to estimate. Amnestic disorders related to head injuries may affect people in any age group. Alcohol-induced amnestic disorder is most common in people over the age of 40 with histories of prolonged heavy alcohol use. Amnestic disorders resulting from the abuse of drugs other than alcohol are most common in people between the ages of 20 and 40. Transient global amnesia, in which people temporarily cannot recall recent events, usually appears in people over 50 with an estimated incidence of 23.5 cases per 100,000 people per year. Only 3% of people who experience transient global amnesia have symptoms that recur within a year. About 7% of all individuals over the age of 65 have some form of dementia that involves some degree of amnesia, as do about 50% of all individuals over the age of 85.

There are a number of terms that are crucial to the understanding of amnestic disorders. In order to retain information, an individual must be able to pay close enough attention to the information that is presented; this is referred to as “registration.” The process whereby memories are established is referred to as “encoding” or “storage.” Retaining information in the long-term memory requires passage of time during which memory is consolidated. When an individual’s memory is tested, retrieval is the process whereby the individual recalls the information from memory. Working memory is the ability to manipulate information from short-term memory in order to perform some function. Amnestic disorders may affect any or all of these necessary processes.

Acetylcholine
A brain chemical or neurotransmitter that carries information throughout the nervous system.
Anterograde
Memory loss for information/events occurring after the onset of the amnestic disorder.
Delirium
A condition characterized by waxing-and-waning episodes of confusion and agitation.
Dementia
A chronic condition in which thinking and memory are progressively impaired. Other symptoms may also occur, including personality changes and depression.
Electroconvulsive therapy
This type of therapy is used to treat major depression and severe mental illness that does not respond to medications. A measured dose of electricity is introduced into the brain in order to produce a convulsion. Electroconvulsive therapy is safe and effective.
Retrograde
Describes memory loss of information/events prior to the onset of the amnestic disorder.
Transient ischemic attack (TIA)
Temporary blockage of blood flow to the brain often resulting in slurred speech, vision disturbances, and loss of balance. The episode is brief and the damage is often short-term (not permanent); also called mini-stroke or warning stroke.
Wernicke-Korsakoff syndrome
A condition of the brain caused by alcohol abuse coupled with malnutrition; also called alcohol encephalopathy.

Amnestic disorder due to a medical condition

The memory loss of amnestic disorder due to a general medical condition can be transient or chronic. This disorder can manifest as retrograde or anterograde loss. For diagnosis, individuals must experience impairment of social or occupational functioning that differs from their normal levels, and the memory loss cannot occur as part of dementia or delirium. The medical condition responsible must be confirmed by patient history or by physical exam or lab results.

Substance-induced persisting amnestic disorder can occur with use of alcohol, sedatives, hypnotics, or anxiolytics. Methotrexate, a chemotherapy drug, can induce this condition, as can some toxins, including lead, mercury, carbon monoxide, insecticides, or industrial solvents. There are subtypes, including alcohol-induced persisting amnestic disorder. In the alcohol-induced form, the symptoms of Wernicke-Korsakoff syndrome may manifest as a result of the thiamine deficiency. Full recovery is not the norm with alcohol-induced amnestic disorder but is possible when caused by other drugs. The diagnostic criteria for the substance-induced form of amnestic disorder are similar to those for that induced by a general medical condition, except that the history should show exposure to the substance involved.

If the characteristics of the amnesia do not fit either of the above categories, the disorder is then classified as amnestic disorder not otherwise specified, generally because the causative agent/event is not known.

Dissociative amnesia is part of a different group of disorders, the dissociative disorders. It manifests as an inability to remember information that is personally important but possibly traumatic or stressful. It was previously called psychogenic amnesia. The memory impairment in this disorder is reversible, and memory loss can be of several types. It can be localized, in which the missing memory covers a defined period of time, or it can be selective, so that only bits and pieces of a situation are recalled. There are also three less common types: generalized (memories covering a lifetime are missing); continuous (memories are missing from a specific time period up to the present); and systematized (only memories from specific categories of information are missing, such as the names of family members). This disorder can arise in a person of any age.

Other types of amnesia

Transient global amnesia causes delirium (a period of waxing-and-waning confusion and agitation), anterograde amnesia, and retrograde amnesia for events and information from the several hours prior to the onset of the attack. It has no consistently identifiable cause, but researchers have suggested that migraine or transient ischemic attack (TIA) may be the trigger. The individual experiences sudden confusion and forgetfulness. Attacks can be as brief as 30 minutes or can last up to 24 hours. In severe attacks, an individual is completely disoriented and may also experience retrograde amnesia that extends back several years. While very frightening for the individual, transient global amnesia generally has an excellent prognosis for recovery, with no lasting memory deficit.

Childhood amnesia, a term coined by Anna Freud in the late 1940s, refers to the fact that most people cannot recall childhood experiences during the first three to five years of life. It has been suggested that this type of amnesia occurs because children and adults organize memories in different ways. The differences are based on the brain’s physical development and communication among the different areas of the brain involved in developing memory. Others believe children begin remembering facts and events once they have accumulated enough experience to be able to relate experiences to each other.

Amnesia has multiple causes. Most cases are traceable to brain injury related to physical trauma, disease, infection, and drug and alcohol abuse. In Wernicke-Korsakoff syndrome, for example, damage to the memory centers of the brain results from chronic use of alcohol coupled with malnutrition. Infections that damage brain tissue, such as encephalitis, also can cause amnesia, as can stroke. Other causes include various types of dementia (e.g., Alzheimer’s disease), traumatic brain injury (e.g., concussion), accidents that involve oxygen deprivation to the brain or interruption of blood flow to the brain (e.g., ruptured aneurysms, near-drowning), tumors in the thalamus and/or hypothalamus, and seizures.

Sometimes procedures such as surgery or electroconvulsive therapy can produce amnesia. Dissociative amnesia is thought to be of psychological origin, caused by a psychological disorder or trauma.

Symptoms of amnestic disorders may include difficulty recalling remote events or information and/or difficulty learning and then recalling new information. In some cases, the individual is fully aware of the memory impairment and frustrated by it; in other cases, the individual may seem completely oblivious to the memory impairment or may even attempt to fill in the deficit in memory with confabulation. Depending on the underlying condition responsible for the amnesia, a number of other symptoms may be present as well.

Diagnosis of amnestic disorders begins by establishing the level of orientation to person, place, and time. Do these individuals know who they are? Where they are? The day, date, and time? Can they recall common current events (e.g., identify the president)? Their responses may reveal information about the memory deficit. Family members or close friends may be an invaluable part of the examination, as they may provide some background information on the onset and progression of the memory loss as well as information regarding the individual’s original level of functioning.

A variety of memory tests can be used to assess the ability to attend to information, utilize short-term memory, and store and retrieve information from long-term memory. Both verbal and visual memory should be tested. Verbal memory can be tested by working with an individual to memorize word lists and then testing recall after a certain amount of time has elapsed. Similarly, visual memory can be tested by asking an individual to locate several objects that were hidden in a room in the individual’s presence.

Depending on what types of conditions are being considered, other tests may include blood tests, neuroimaging (CT, MRI, or PET scans of the brain), cerebrospinal fluid testing, and EEG testing.

In some cases, treatment of the underlying disorder may help improve the accompanying amnesia. In mild cases of amnesia, rehabilitation may involve teaching memory techniques and encouraging the use of memory tools, such as association techniques, lists, notes, calendars, and timers. Memory exercises may be helpful. There are no specific drugs to treat amnesia. However, treatments for Alzheimer’s disease and other dementias, such as donepezil (Aricept), are being studied to see if they may also be effective in treating amnestic disorders.

The prognosis is dependent on the underlying condition that has caused the memory deficit and on whether that condition has a tendency to progress or stabilize. Alzheimer’s disease, for example, is relentlessly progressive, and the memory deficits that accompany this condition can be expected to worsen over time. Individuals who have memory deficits due to a brain tumor may have their symptoms improve after surgery to remove the tumor. Individuals with transient global amnesia can be expected to fully recover from their memory impairment within hours or days of its onset. In the case of some traumatic brain injuries, the amnesia may improve with time (as brain swelling decreases, for example), but some degree of amnesia for the events just prior to the moment of the injury may remain.

Amnestic disorders are preventable in so far as brain injury can be prevented or minimized. Common sense approaches include wearing a helmet when bicycling, horseback riding, or participating in potentially dangerous sports; using automobile seat belts; and avoiding excessive alcohol or drug use. Brain infections should be treated swiftly and aggressively to minimize the damage due to swelling. Victims of strokes, brain aneurysms, and transient ischemic attacks should seek immediate medical treatment.