In cases of multiple aneurysms of the anterior communicating artery complex, not all lesions may be detected on preoperative radiological studies, due to the complex angioarchiecture around the ACoA. Careful dissection is mandatory to ensure the completeness of aneurysm surgery. Multiple separated and multi-lobular aneurysms of the anterior communicating artery are unusual lesions and should be studied as a special topic.

The authors present four cases of these rare aneurysms, namely three multiple separated aneurysms and one multi-lobular aneurysm of the ACoA. Three of these patients presented with subarachnoid hemorrhage

[SAH]. There were no familial or arteriovenous malformation-related aneurysms reported in our series. We propose a new classification for this type of aneurysm on the ACoA. The literature is reviewed. The results, physiopathology and management are discussed. 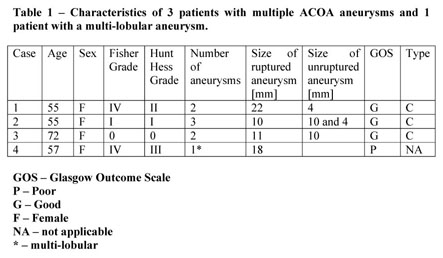 The main author performed microsurgical clipping in 127 patients with cerebral aneurysms from June 1995 to October 2007. All reports were analyzed and we performed surgery of 32 ACoA aneurysms. Findings of DSA and CIA were reviewed and compared with those of microsurgery. Only 3 patients were confirmed to have multiple separated aneurysms of the ACoA, and 1 patient confirmed to have a multilobular aneurysm. Data regarding clinical and imaging records are summarized on table 1.

Three patients presented with subarachnoid hemorrhage [SAH] and were diagnosed preoperatively, two of these with multiple aneurysms [figures 2A to 2D, 5A to 5F]. In these cases the size of ruptured aneurysms was larger than or at least the same as that of unruptured aneurysms. We classified the projection of the aneurysm into four types [fig. 1]. Multiple aneurysms may be associated with familial aneurysms or arteriovenous malformations, however, there was no such case in our series. These patients as well as the others with ACoA aneurysms were treated successfully with multiple clippings. The patients showed good outcome. All multiple aneurysms were of the type C [figures 2,3,4]. The fourth case may be classified as multi-lobular on angiogram views [figures 5A to 5F].

Despite advanced imaging techniques, multiple ACoA aneurysms may be misdiagnosed. They may not be detected on DSA due to complex angio-archiecture around the ACoA. CTA is helpful in distinguishing multiple aneurysms from multilobular ones with a common neck. We present 3 cases with multiple necks and 1 case with a complex multi-lobular aneurysm. The third one, however, may be misdiagnosed as multi-lobular.

Mathematical modeling of aneurysms is critical to understand the biophysical phenomena that contribute to aneurysm growth and rupture. With the advent of high quality 3-D imaging, many physical parameters regarding aneurysm size and shape can be recorded and studied. Isolated measurements, such as maximum size, location and presence of irregularities are fairly simple yet significant parameters that may predict future rupture. Certain geometric relationships such as aspect ratio [aneurysm height/neck width ratio] seem to correlate with rupture. 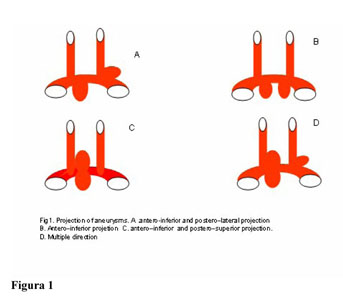 During surgery, exploration of the entire ACoA complex is necessary if preoperative CTA and DSA show multi-lobular ACoA aneurysms. In multiple aneurysms, the size of the sac is an important factor to identify the ruptured one. In our cases, the size of ruptured aneurysms was larger than or the same as that of unruptured aneurysms. In multiple aneurysms with separate necks, each aneurysm was occluded with separate clips. On the other hand, multi-lobular aneurysms with common neck were occluded with a single clip.

1- Right Al junction in the cases where the left Al is hypoplastic.

3- Middle portion of ACoA in the case where the A1 are similar.

Big or giant aneurysms are complex. They are projected into multiple directions, and frequently show a large neck, making it difficulty to assess their exact limit and the parent artery. Fortunately, multiple aneurysms in the ACoA are unusual; a few points ought to be observed (5):

1- In bi- or tri-lobular aneurysms, special views and projections on the 3D-CT angiogram may be useful to obtain an exact diagnosis. The differentiation of 2 aneurysms from a bi-lobular one is very important in management planning.

2- The detection of the exact area of rupture is frequently unlikely.

3- Resection of rectus girus is necessary to obtain a correct view of the operatory field.

4-Adequate choice of clip is important, and we prefer straight and short ones. Occlusion of contra-lateral A1 must be avoided.

The same rules might be observed for multiple aneurysms in the anterior communicating artery.

After clipping, it is reasonable to administer papaverin in the vessels involved in the dissection (13) in order to avoid vasospasm due to mechanical manipulation. The histological difference between the wall of umuptured aneurysms and ruptured aneurysms is well known, however, the histological factor is not the only factor to be regarded concerning indication of an occlusion by clipping or conservative management (3,7,8). The asymmetrical pattern of flow in both carotid systems may provoke in efferent vessels fluid slipstream into aneurysms, becoming worse in multi-lobular aneurysms (11). Kato et al (6) presented similar findings, suggesting that the use of a 4D-CT angiogram to predict impending rupture in intact aneurysms, real-time, is less invasive and allows prioritizing the intervention for unruptured aneurysm cases, provides an effective screening of the high-risk population, and aids preoperative planning of clip application. Hayakawa et al (4) obtained electrocardiographically [ECG] gated multi-section helical CT images of 23 patients with ruptured intracranial aneurysms. 4D-CTA [3D-CT angiography plus phase data] images were generated by ECG-gated reconstruction. Four patients showed pulsation of an aneurysmal bleb. Clipping was performed in two of these patients, and the rupture site matched the pulsatile bleb seen in 4D-CTA (4). The point of maximum amplitude of pulsation of the aneurysm wall in unison with the RR interval of the electrocardiogram determines the potential rupture point (4,6). Regarding kissing aneurysms, Wanifuchi (14) described a 45-year-old male who presented with an extremely rare case of symmetrical kissing aneurysms located at both ends of the anterior communicating artery. Angiography and three-dimensional computed tomography [3D-CT angiography] clearly showed the relationship of the kissing aneurysms. The aneurysms were clipped through the right pterional approach. Temporary clipping of the anterior cerebral arteries for 5 minutes was required to gain enough operative space. The patient was discharged without neurological deficits. 3D-CT angiography, magnetic resonance angiography, or digital subtraction angiography may be useful for detecting kissing aneurysms, but the most important issue is awareness of this unusual condition. In our series we did not find any kissing aneurysms. Kiuosue (12) studied 47 berry aneurysms, which were submitted to endovascular treatment by means of coils. They concluded that four anatomic parameters correlated significantly withthe rate of successful occlusion: neck size (P = .014), shape (P=.042), dome-to-neck ratio (P <.01), and relationship to neighboring artery (P=.025). The difficulty score based on two parameters (dome-to-neck ratio and relationship to neighboring artery) significantly correlated with the occlusion rate (r= 0.63, P <.01). Multi-lobular aneurysms were difficult to occlude with coils, especially in the ACoA.

One old female patient in our series had an unruptured aneurysm of the ACoA. Our option for surgery considered another aneurysm, located in the posterior communicating segment. By the same craniotomy we clipped both.

The directions of the domes of multi-lobular aneurysms may be different, and Debono et al concluded after a detailed analysis of 119 consecutive communicating artery aneurysms (2) that in their experience the direction of the aneurysm was the main morphological criterion in choosing between microsurgery or endovascular procedure for the treatment of ACoA aneurysms. Also, they proposed that microsurgical clipping should be preferred for ACoA aneurysms with anterior direction, and depending on morphological criteria, endovascular packing for those with posterior direction (2). Newly developed aneurysm increasing and rupturing in a short period of time after clipping of the first aneurysm has been described (8). Our hypothesis for the event is that the phenomena may occur both where the parent artery was abnormal and in residual neck of complex multi-lobular aneurysms. The mechanisms of cerebral aneurysm recurrence and enlargement were investigated in 11 patients by Kato (8,9): two with dissecting aneurysms, six with fully grown aneurysms after neck clipping, one with enlarged aneurysm after dome clipping, and two with enlarged aneurysm due to recanalization after GDC coil embolization. They concluded that it is fundamentally important to ensure complete attachment of the internal elastic lamina around the aneurysm neck by precise neck clipping and effective embolization, with accurate positioning of remaining internal elastic lamina. In our opinion, the methods to determine a precise clipping have to be used anyway, at any price, because the effects of new enlargement may be catastrophic for the patient, causing severe morbidity as well as mortality, when there has previously been the chance to cure him/her. This leads to better understanding the importance to study the multi-lobular and multiple communicating aneurysms as a special topic separated from the berry simple shape aneurysm or elongated single aneurysm. 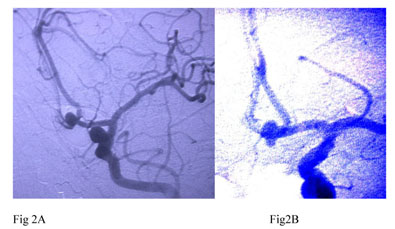 Multiple ACoA aneurysms may not be detected on preoperative study. Close proximity or small size of the lesions may be responsible for the preoperative false negative angiographic findings. Therefore, DSA and CIA should be performed carefully and precisely in multi-lobular aneurysms on ACoA. Additionally, it is recommended to keep this possibility in mind during ACoA aneurysm surgery. 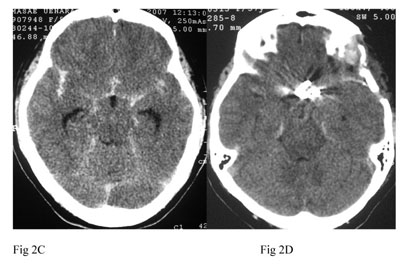 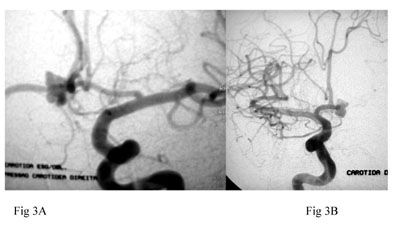