A hero of the Wild West

At the age of 10, Bill Pickett closed the book that he had been using in the fifth grade. Then he opened the blank book that would eventually become filled with his exploits as a cowboy. Bill and his brothers used to put on shows, featuring their skills as talented ropers, riders, and bulldoggers. When their performance was over, then they would pass around a hat and hope for many monetary rewards from their audience.

Bill Pickett was a Texan. He was different from most Texans because his blood was part African American and part Native American. He was born on December 5, 1870, and by 1883 he had become a professional cowboy. He was part of the 101 Ranch Wild West Show that had been begun by William (Buffalo Bill) Cody. 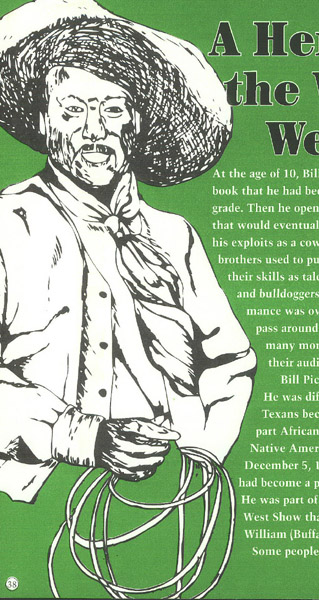 Some people call him The Dusky Demon. Other people called him The Bull-Dogger. Bill Pickett got that second name by inventing a way to wrestle a steer and force it to lie on the ground. Cowboys referred to such steer wrestling as "bulldogging." Bill invented bulldogging one day when he was on a roundup. He was having lots of trouble catching one of the steers that needed to be gathered during the roundup. Then Bill made an observation.

Bill Picket noticed that the bulldogs, the animals that helped with the roundup, would bite a steer's lips and then pull that steer to the ground. Bill decided that he would try the same trick. He jumped off his horse, grabbed the steer's horns, twisted the steer's head around and bit the steer's lips. Bill soon had that steer lying on the ground, just where he wanted it to be.

Other cowboys decided to try using Bill's invention. Soon bulldogging became an event staged for crowds at the rodeo. Bill Pickett competed in many of those rodeos, and his fame spread. In 1971, Bill Pickett was voted into the National Cowboy Hall of Fame, a showcase of Western heroes that is in Oklahoma City.

Bill Pickett was the first African American to be inducted into the Cow-boy Hall of Fame. Colonel Zack Miller, Bill's boss and friend had realized much earlier that Bill deserved to be in the Hall of Fame. He had said, "Bill is the greatest sweat and dirt cowhand that ever lived, bar none." 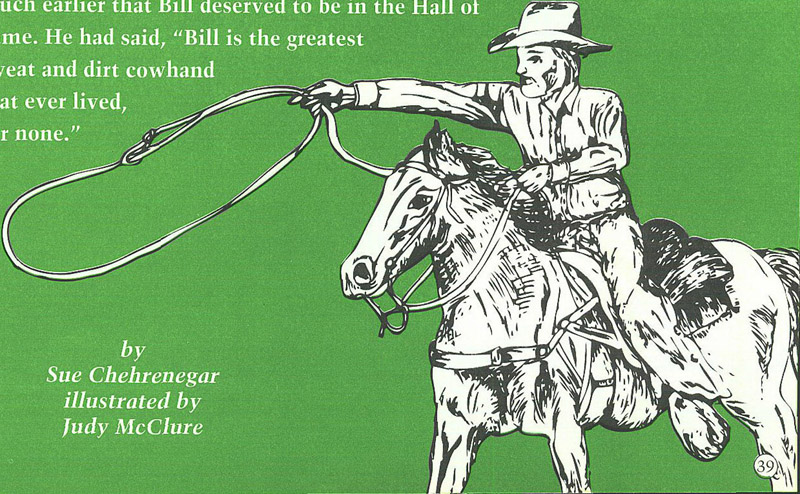