The family was the basic unit of Ute society. Families were made up of parents, children, and other close relatives. Everyone helped care for children. Young girls were often the main caretakers. Girls carried babies on pieces of wood called cradleboards. Both boys and girls helped the adults gather food. 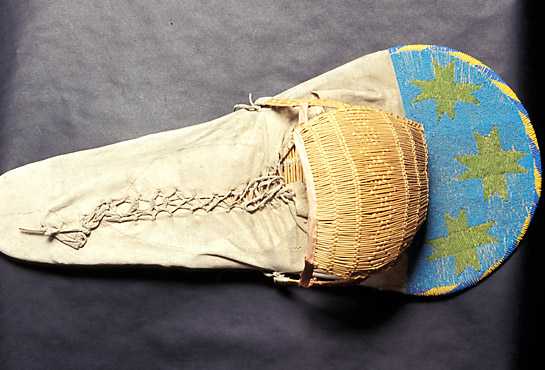 Cradleboards allowed Ute babies to be set down or carried on someone's back. Marilyn "Angel" Wynn/Nativestock.com

For centuries, in Ute camps, everyone helped teach young children. Once they moved to reservations, Ute parents were encouraged to send their children to government boarding schools. There, Ute children were not allowed to speak their own language. They were punished when they observed their old ways. Still, some held onto their customs.

In the 20th century, the Ute demanded public schooling for their children. Since the 1960s, Ute children have gone to public schools. Often, Ute children have trouble because they do not speak English well enough to understand their lessons. Some schools fail to respect Indian culture. Children also suffer from poverty and low self-esteem.

The Ute built different kinds of homes, depending on where they lived. Most common were domed houses about 8 feet high and 15 feet around. They were made up of a pole frame covered with willow branches or bark. Some Ute built similar cone-shaped houses. Groups who hunted on the Great Plains had small tepees covered with elk or buffalo skin. Sweathouses were common. These were buildings for cleansing rituals. In them, water was poured over heated rocks to make steam. They are still used today.

The Ute lived in traditional homes until the 1950s. Then, new funding helped them build modern houses.

Before the Ute had horses, the seven bands lived in small family groups for much of the year to gather what they could find in their lands. Food was scarce, and groups had to cover big areas to find it.

From spring until fall, family units hunted deer, elk, and antelope. They gathered seeds and wild fruits. They caught rodents and other small game. Crickets and grasshoppers were dried and mixed with berries to make fruitcake.

In late fall, the small groups rejoined the larger band. Then they left the mountains to find shelter for the winter. After they got horses in the 1600s, they went farther to hunt. Buffalo became a major source of food and clothing. The Ute loved jerky, a kind of meat that is cut into strips and dried. Jerky is still made today. Another modern dish is frybread. These plate-sized disks of bread are fried in hot fat. 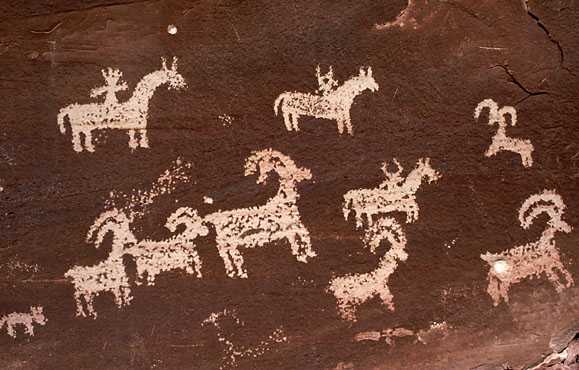 Drawings on a rock in Utah show the Ute hunting elk on horseback. ©Michael & Patricia Fogden/Corbis

Many men painted their bodies and faces. The colors yellow and black were used in times of war. Women sometimes painted their faces and the part in their hair. Some Ute pierced their noses and put small animal bones in the hole. Others tatooed their faces with cactus thorns dipped in ashes. Both sexes wore necklaces of animal bones and juniper seeds.

Among the Ute, shamans (pronounced SHA-munz or SHAY-munz) were both healers and religious leaders. They got supernatural powers from the spirits of animals and dead people. Most shamans knelt next to a sick person and sang special curing songs. Some shamans also carried small bags that held special items, such as small drums and rattles. The objects helped the shaman heal people.

Today, there are no more old-time Ute healers. Most Ute use modern health-care facilities in urban areas. Those who prefer traditional healers may see Navajo medicine men in Arizona. 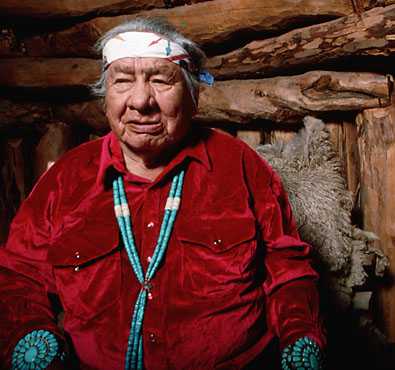 Ute no longer have their own shamans, so Ute who prefer tradition healing methods might seek out a Navajo medicine man like this one. ©Arne Hodalic/Corbis

Ute crafts had almost been forgotten by the 1930s. Today, they have been revived. Some Ute weave baskets and make pottery. Others work with beads and leather. They often sell these works of art in gift shops.

Many Ute tales explained features of the natural landscape. For example, legends tell about Sleeping Ute Mountain, which looks like a sleeping Indian with a headdress. The Indian was once a Great Warrior God who was wounded and fell into a deep sleep. Blood from his wound became water. Rain clouds fell from his pockets. The blanket that covers him changes color with the seasons. 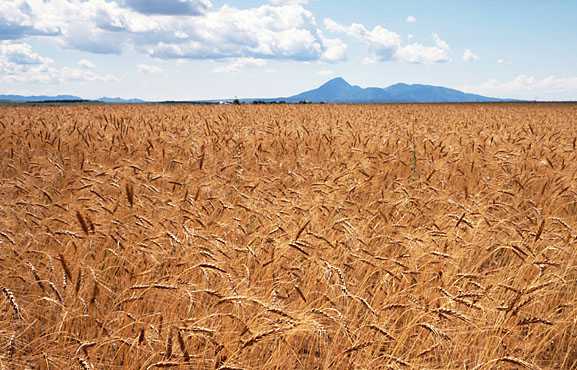 Bands
groups
Raid
an attack on land or a settlement, usually to steal food and other goods
Reservation
land set aside and given to Native Americans
Ritual
something that is custom or done in a certain way
Tribe
a group of people who live together in a community

Carrier, Jim. West of the Divide: Voices from a Ranch and a Reservation. Golden, Colorado: Fulcrum, 1992.