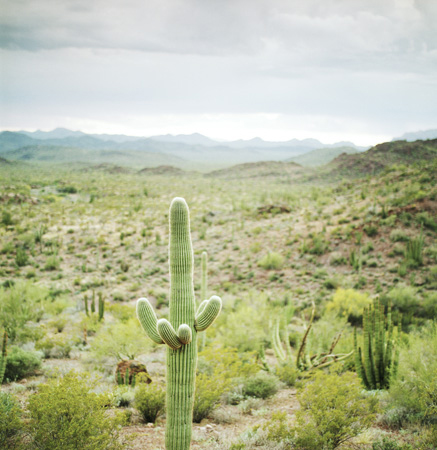 It is hard for plants to grow in the desert because there is not much moisture in the ground. But cactus plants are able to store water. Bob Stefko/Botanica/Jupiterimages.

Deserts occur where fewer than 20 inches (51 centimeters) of rain fall each year. Deserts cover about one-fifth of Earth. They are found all over the world.

Most people think of deserts as hot, sandy places. Many deserts are like this. These deserts are hot all year long. Summer is the hottest, driest season. Hardly any rain falls during the summer.

A little rain usually falls during the winter. Some years, no rain falls at all. These deserts are found in North America, South America, Africa, and Australia.

These deserts have little humidity (moisture) in the air. The air is very clear. Much sunlight comes through the atmosphere. This raises temperatures to make the days very hot.

Even the hottest deserts cool down at night. All the heat escapes into the atmosphere when the sun goes down. Nights in the desert can be very cold.

The largest hot desert is the Sahara. It is found in northern Africa. The Sahara covers 3.5 million square miles (9 million square kilometers). It is about as big as the United States.

The largest desert in North America is the Chihuahuan Desert. It covers 200,000 square miles (518,000 square kilometers) in Mexico and the southwestern United States.

The cactus is common in hot deserts. These plants store water inside their hollow stems when it rains. They live off this water during dry periods. The plant’s stem gets thinner as it uses the stored water.

Other hot desert plants include bushes and small trees. These plants have roots close to the surface. They can catch every bit of rain that falls. Big, tall trees cannot grow in hot deserts. The soil is too dry.

Very few plants grow in cold deserts. Certain grasses and mosses are able to live in these cold climates.

Many animals live in hot deserts. Most desert animals are small. They include mammals such as kangaroo rats, rabbits, and coyotes. Desert reptiles include lizards and snakes. Insects, scorpions, and birds also live in deserts.

Most of these animals are active at night. It is cooler then. They spend the hot day in cool underground burrows or hiding under rocks. At night they come out to hunt for food.

Desert animals have adapted to the lack of water. Some get the water they need right from the food they eat. Others get water from drops of dew or fog.

Animals live in cold deserts, too. The most well-known animals from Antarctica are penguins and seals. Whales live in the ocean around Antarctica.