The chemical element aluminum is the most common metal in Earth’s crust. It is also more widely used than any other metal except iron. Scientists use symbols to stand for the chemical elements. Al is the symbol for aluminum, which is also spelled aluminium. 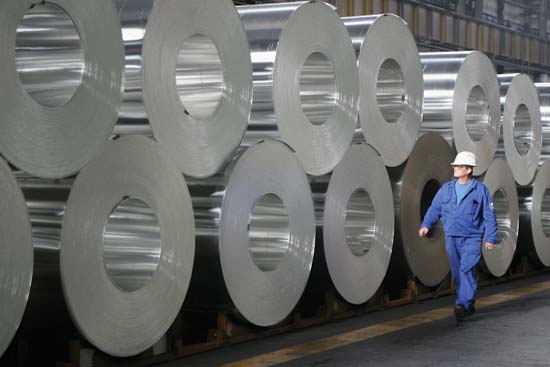 Rolls of processed aluminum sit in a factory in Hungary. Sean Gallup/Getty Images

Where Aluminum Is Found

Aluminum is not found on its own in nature. Other elements, including silicon, oxygen, and hydrogen, combine with aluminum to form compounds. These compounds are present to a greater or lesser extent in almost all rocks, plants, and animals. Rocks that contain these compounds are called aluminum ores. Bauxite is the most common aluminum ore. In the 1800s scientists learned how to separate the aluminum from the other elements to obtain pure aluminum.

Aluminum metal is soft and silvery in color. Pure aluminum is quite weak, but when it is combined with small amounts of silicon and iron it is hard and strong. The product is called an alloy. It is very useful because it is lightweight and it can be molded and shaped very easily. It can therefore be drawn into wire or rolled into thin foil. Aluminum resists corrosion, or being worn away, because in air a hard, tough film forms on its surface.