Iron is the most widely used metal on Earth. Iron is used to make steel. In turn, steel is used to make buildings, bridges, railroad tracks, vehicles of all kinds, and countless other products. 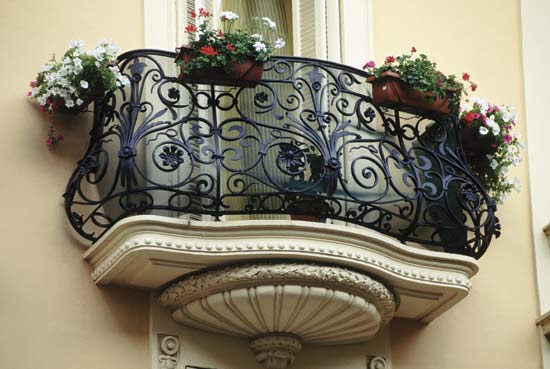 Iron is often used to make such decorative items as railings and fences. © Bo Zaunders/Corbis

Iron is the second most common metal in Earth’s crust. Of the metals in the crust, only aluminum is more common. Iron is also the fourth most common element (basic substance) in the crust.

Iron in its pure form is a heavy, silvery, magnetic metal. But iron is almost never found in its pure form in nature. Instead, it is found in the form of iron ores. Ores are minerals with mixtures of different elements. The main iron ores are made up of iron linked to oxygen or to oxygen and carbon.

Hot lumps of iron may be pounded into shapes. Melted iron may be poured into molds of different shapes. As the iron cools, it hardens. Today, however, most iron is made into steel. Steel is a mixture of iron and carbon. Steel is stronger than iron alone.

Thousands of years ago people may have gotten iron from iron meteorites. Meteorites are chunks of rock that fall to Earth from outer space. After ancient peoples discovered how to smelt iron, they learned how to make iron tools and weapons. During a period called the Iron Age, the knowledge of how to use iron spread across Europe and Asia.

Iron in the Body

Iron is an important part of a person’s diet. Good sources of iron are red meat, chicken, tuna, egg yolks, beans, whole grains, dried fruit, and leafy green vegetables. The body uses iron to build a substance called hemoglobin in the blood. Hemoglobin carries oxygen to all the cells in the body. The cells use the oxygen to release the energy they need to do their jobs.