The first use of wind power was to propelsailboats and sailing ships. Another source of power from a moving fluid, the waterwheel, powered 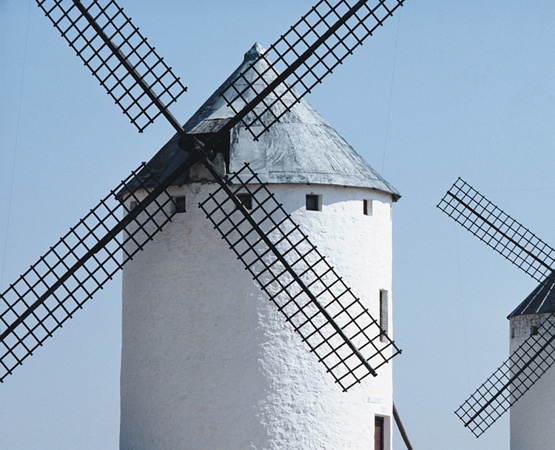 Sail-based windmill on a turret
PhotoDisc
flour mills throughout the Roman empire and seems to have inspired the second use of wind power, the windmill. In Persia (now Iran), around 600 c.e., people built windmills that were like undershot waterwheels (see water power) turned on their sides so that the axle of the windmill was vertical. Wind was allowed to blow on the blades on one side the wheel; blades on the other side were protected from the wind by a barrier. Similar windmills were used in China in the thirteenth century. The advantage of this type of windmill is the vertical axis, which can be used to power a grain mill without gears. Disadvantages included very low efficiency since only half the wheel was in the wind.

Around 1270, craftspeople in western Europe developed a large windmill that used a horizontal axis and gears. The blades on such a windmill were based on sails rather than on the paddles of a waterwheel. In Holland, the practice of building mills as towers with a sail-based windmill attached directly to the tower became established about 1390. Many Dutch windmill towers are still used, mostly to pump water. The original form of the windmill tower had a fixed direction for the propeller, but around 1450, the Dutch created a tower in which the top portion, called a turret, could be turned to face the wind.

Early windmills used wooden axles. In 1754, an influential engineer, John Smeaton [British: 1724–1792], specified cast iron for windmill axles and in 1759 he analyzed the power output of different designs. Small windmills with many blades and a large sail-like vane extension to direct them into the wind gradually evolved, with the most influential one of this type introduced in the United States in 1854. By the end of the nineteenth century, farms throughout the North American plains region, where high winds are common, used such windmills to pump water fromwells. Later some of these mills were adapted to chargingbatteries as a source of electricity before power lines reached remote farms.

The use of wind to provide electric power on a larger scale began in Russia in 1931 and continues to the present. Many very large windmills with blades based on the design of airplane propellers have been installed in high-wind regions such as tops of hills or islands to generate electricity. In the 1980s, concern about the price of fossil fuels led to the development of wind farms in the United States, especially in California. A wind farm uses hundreds of relatively small windmills to generate electricity, which is supplied to the power grid.

Since then, thousands of wind farms have been built around the world. Some wind farms can even be found in the ocean and in large lakes. Some people who live near wind turbines complain that they are noisy and ugly and a danger to birds, but others argue that they are an important and environmentally friendly source of renewable energy. Renewable energy is created from something that nature can supply in almost endless amounts quickly and easily, such as wind and sunlight.

Contributions to the study of Wind Power