Who better to launch a graphic novel series for children about daring sea expeditions than Fabien Cousteau, grandson of revered oceanographer Jacques Cousteau? In the new series, Fabien Cousteau Expeditions, he shares his own real-life experiences with a new generation, inviting them to discover the mystery and beauty of the ocean and the animals that live in it. The first book is Great White Shark Adventure (Simon & Schuster). "My grandfather always told me, 'When one person has the chance to lead an extraordinary life, he or she has no right to keep it to themselves,'" says Cousteau. "That's why I want to share my stories. Many of these young readers will never be a scuba diver. They will never see a shark in person. But I hope that I can get them thinking about the ocean and the amazing world itself."

Cousteau, who sailed with his grandfather on the famed Calypso and learned how to scuba dive on his 4th birthday, is proud to be a third-generation ocean explorer and documentary filmmaker. He insists he upholds his family's oceanographic legacy not out of obligation, but out of necessity. "For me the magic of exploration, especially within the aquatic realm, has always been a tantalizing one I can't live without," he says. "It's like an addiction." 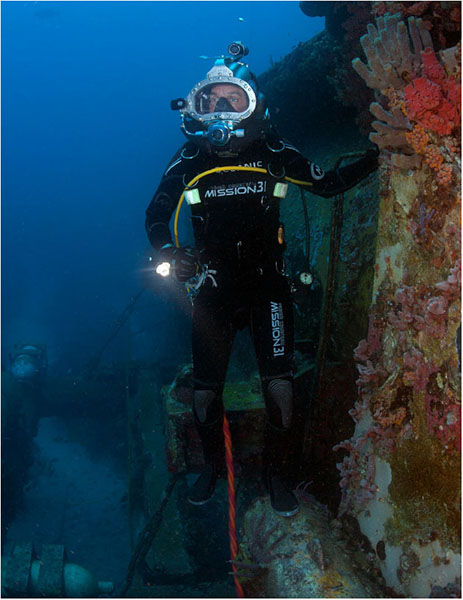 According to Cousteau, he's always wanted to create children's books about his adventures. He says he and co-author James Fraioli connected on an earlier project and he's thrilled to have the chance to work with him again. The books will loosely follow Cousteau's oceanic exploits. "In many ways, they are based on the real-life stories I've had growing up and into my adult years," he says. "It's part fantasy and a lot of reality. The adventures, as wild as they may seem, are all based on fact."

Great White Shark Adventure introduces readers to young explorers Bella and Marcus who are lucky enough to be on a boat with Cousteau and his research team off the coast of South Africa, where Great White sharks are common. In addition to enjoying an engaging storyline and eye-catching, comic-book style illustrations by Joe St. Pierre, readers will learn key facts about sharks, including the conservation efforts that are underway to protect this fascinating species. 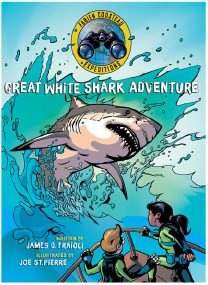 Cousteau says he wanted the book to read like one of the comic books he enjoyed as a youth. "As a kid, it was not easy to keep my attention, but comic books always did," he says. In particular, Cousteau remembers reading The Adventures of Tintin by Herge. "I think these are the types of books that kids want to read today," he says. "I know kids have their technology, and I have always loved technology, too, but there is nothing better than holding paper with images on it to tantalize your imagination."

Other books in the series will delve deeper into Cousteau's more daring feats, including immersing himself inside a shark-shaped submarine called "Troy" in order to get a close-up view of sharks in action. The stunt was the subject of his 2006 documentary Mind of a Demon. Cousteau also famously completed "Mission 31" in 2014, spending 31 days underwater with a team of other marine scientists in a unique, underwater laboratory. "Being in an extreme alien environment is extremely risky and dangerous, but when you accomplish something like that, it's all worth it," he says. "You get to see things that no one else gets to see because no one stays down there that long." Cousteau says these types of activities aren't about garnering attention for him. "It's about engaging people's imaginations," he says. "With Mission 31, I was able to reach more than 100,000 kids who were following me in their classrooms. It's about sneaking the science in through the back door and getting them interested however you can." 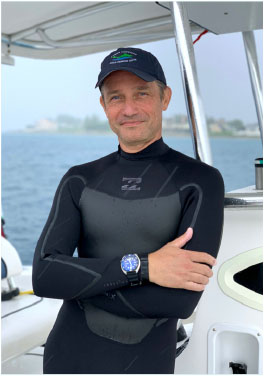 For Cousteau, engaging with children, particularly on matters of the environment, is one of life's greatest pleasures. "The short version is that I love kids," he says. "My non-profit organization, the Fabien Cousteau Ocean Learning Center caters to the young, and the young at heart." Cousteau says the Ocean Learning Center encourages people, especially kids, to participate in initiatives such as beach clean-ups, oyster restoration, and releasing baby sea turtles. "It's meant to connect people with our ocean world," he says. "It's a way to do a symbolic give-back. It's always a true reward for me, a recompense, to see children with their interest peaking and to see their eyes light up as the thought process happens. The unbridled enthusiasm of children recharges my batteries in a way that nothing else does. I'm a kid at heart. I may not look like it, but I feel it."

When Cousteau isn't exploring the ocean, working on programs for his Ocean Learning Center, or making documentaries, he is a coveted public speaker. "I especially like to talk to the kids," he says. "I tell them about the fantastic creepy, crawly creatures I've seen. It's amazing when you think we've only explored five percent of this spectral realm. When I mention that number, it always gets them thinking. I hope they're wondering, What else is out there?" He also has a new television series premiering this month. 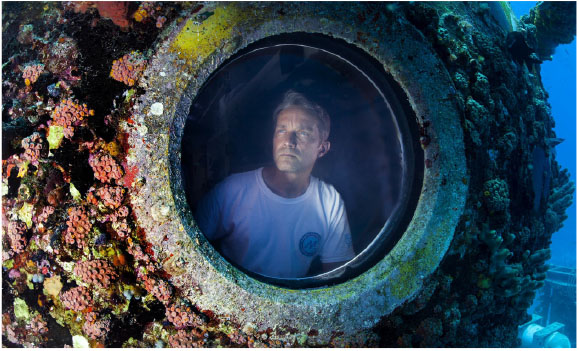 Cousteau says all of his efforts, films, public speaking engagements, the Ocean Learning Center, and the new Fabien Cousteau Expeditions book series are all part of an effort to help people forge a stronger bond with the natural world. "It all stems from something my grandfather used to tell me all the time," says Cousteau. "'People protect what they love, they love what they understand, and they understand what they're taught.' The crux of what I do is to give people that sense of understanding. I hope it sparks their imagination and their passion, even if they never set foot in the ocean. I want to make them a little more adventurous, a little more curious, and connect more deeply with this little blue bubble we all depend on." 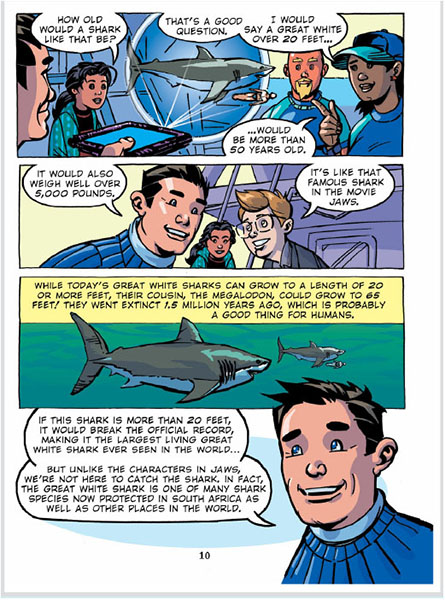 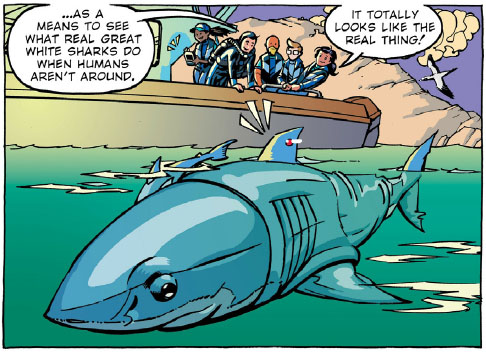